The Central Coast environmental community gave federal officials a tongue lashing on May 22 in the Embassy Suites hotel in San Luis Obispo, berating the U.S. Department of Interior (DOI) for its plan to grow oil and gas production on public lands across Central California.

Following a rally in the parking lot of the hotel led by SLO Mayor Heidi Harmon and leaders of environmental groups, including the Sierra Club and Center for Biological Diversity, more than 200 people poured into a conference room.

"Public lands are ours to enjoy, not yours to destroy," read signs that were handed out to meeting attendees. 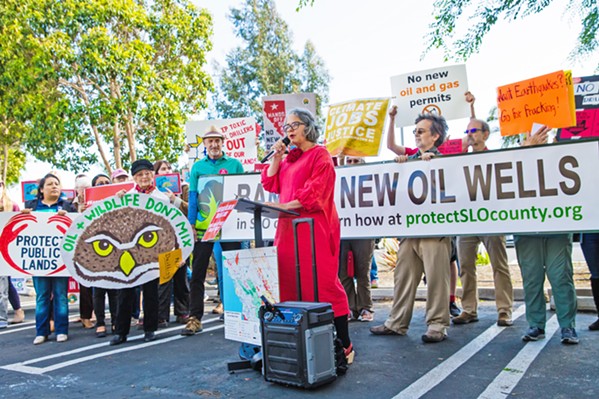 The DOI's Bureau of Land Management (BLM) hosted the meeting as it's taking public comment on an environmental document that addresses increases in hydraulic fracking that are laid out in the BLM Bakersfield Office's resource management plan.

Before handing the mic to members of the public, a BLM representative gave a brief presentation on the plan, which opens nearly 1 million acres of land in eight counties to new oil and gas leases, including 125,000 acres of SLO County.

Among the sites listed are areas in the Irish Hills Natural Reserve, Montaña de Oro State Park, and parcels near the Carrizo Plain, Lake Nacimiento, and Camp Roberts.

The BLM has not issued a new oil or gas lease in California in more than five years. But up to 400 new wells could be drilled in the next decade, with as many as 40 wells fracked, according to the BLM's environmental document on fracking. That report largely concludes that the environmental impacts would be "negligible."

Nearly all those who spoke at the May 22 meeting disagreed.

"Opening these areas for oil and gas development, including well stimulation, puts our drinking water supplies, air quality and recreational opportunities, public health, and tourism at stake," said Mayor Harmon to thunderous applause from the audience.

A representative for U.S. Rep. Salud Carbajal (D-Santa Barbara) read a statement for the congressman that called on the BLM to abandon the plan.

Candice Kim, of the Center for Biological Diversity, said California residents could not trust regulatory systems to protect them from the impacts of oil production. Kim noted that local oil producer Sentinel Peak Resources was recently granted an aquifer exemption to inject wastewater from the Price Canyon Oil Field into portions of the Arroyo Grande aquifer.

"The EPA just granted a giveaway of a local aquifer. That social safety net has failed this community," Kim said.

Many speakers discussed the urgency of the broader climate change crisis, expressing dismay that the federal government would allow oil and gas expansion on public lands.

"In this day and age of climate change, any new production of oil is inherently and massively irresponsible," SLO resident Lizza Demsetz said. "When it comes to this proposal, the choice is really simple. We need to keep the moratorium on so we can come back ... for solar or wind production."

Attendees also lambasted the BLM for not recording the meeting or taking speakers' comments into the record. BLM officials asked for comments to be submitted in writing online or in the mail. The meeting grew heated and personal at times, with some speakers taking direct aim at the few BLM officials in the room.

Charles Varni, a resident who led the campaign for Measure G, a failed 2018 ballot initiative that would've banned fracking and new oil wells locally, called on residents to continue the fight.

"Let's consider this a rally for climate crisis warriors," Varni said. "The BLM is directed by politicians, who are directed by fossil fuel oligarchs and corporations fueled with millions of dollars, like the $8 million they spent to defeat Measure G."