SLORTA gives up on a $900,000 green dream and goes back to conventional diesels 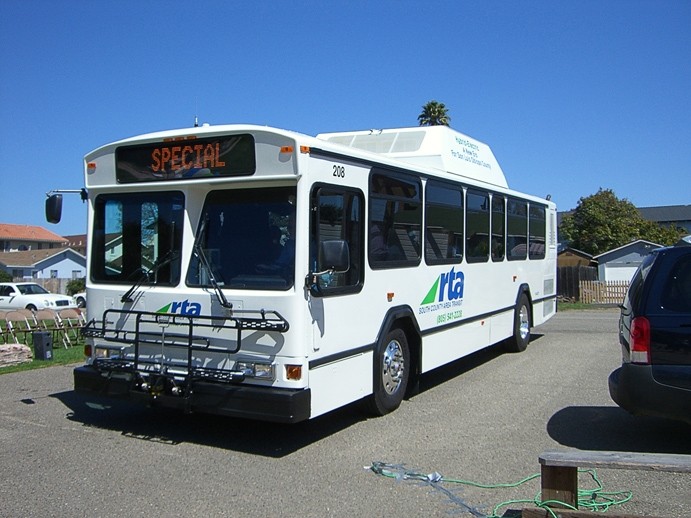 The hybrid vehicle movement had finally come to public transportation in San Luis Obispo County. At least that’s the way it was advertised when the San Luis Obispo Regional Transportation Authority (SLORTA), the county consortium that operates more than 40 buses on routes between all the cities of the county, bought two hybrid-electric buses a few years ago for more than $900,000.

SLORTA, the largest public transportation operator in the county, declared on its website that the two new hybrid-electric buses would “allow riders to reduce their carbon footprint locally and on the entire planet.” The authority launched the buses on their prospective routes with great fanfare.

But the green hybrid-diesel dream of 2007 has turned into the economic and maintenance nightmare of 2009. The buses not only break down constantly, they have difficulty going uphill, a major problem when many of the RTA’s routes involve crossing the county’s grades.

Perhaps most galling of all for RTA officials who hoped for greater fuel efficiency from their new buses, the hybrids ended up guzzling more diesel fuel than conventional diesel buses. The RTA now uses the hybrids only for light duty and has decided to go backward technologically: It will purchase conventional buses next time.

The glitch in the green-hybrid bus revolution isn’t limited to San Luis Obispo County. Towns and cities from Hawaii to Eastern Canada have had their green dreams hijacked by technical limitations. The technology for diesel-electric hybrids for many models is relatively untested and not necessarily suitable for the rugged, rough-and-tumble environment of buses.

Both buses were paid for by a $1.69-million grant financed with $1.35 million from the State Transportation Improvement Fund and $345,000 from local county and city governments. Approximately half the money was used to convert two older buses to hybrid-electric technology. The RTA wants to spend the rest of the $700,000 left over from the grant to buy two new conventional clean diesel buses.

The RTA bought its first hybrid bus for South County Area Transit (SCAT), the portion of its fleet dedicated to serving the southern, Five Cities area of the county. It broke down constantly and took forever to fix, according to RTA documents. This vehicle is now relegated to school bus duties that don’t tax its frail motor.

The second bus, No. 169, came into service in 2008 and was an even bigger bust. Edward F. King, the executive director who was hired after the purchase of the hybrid, wrote in a letter to Caltrans—the organization that regulates the grant—that bus 169 had the highest maintenance cost of any bus in the fleet. In just one month, September 2008, the bus had 108 hours of maintenance work done, most of which had to do with the hybrid drive. King also complained that the builder had promised the bus would “meet/exceed the challenges of our operating environment,” but the vehicle could not make it up hills.

“Again, we have found the opposite with the performance of this vehicle. We are unable to operate the coach on route 9 (the bus route that runs between San Luis Obispo and Atascadero) as it will not make it up the grade with a full load. Again, due to its limitations in our driving environment, we are unable to use the bus on all RTA routes and services,” King wrote.

Transportation officials were also miffed about the bus’s fuel mileage.

“We were assured by the vendor that this vehicle would meet or exceed the miles per gallon average of our diesel fleet. We have found the contrary,” King wrote. “The RTA clean diesel fleet averaged 5.8 gallons per mile in 2008. The best month for bus 169 has been 3.86.”

Other municipalities have had problems with hybrid buses. Honolulu had originally intended to replace half its fleet of 530 buses with hybrids but found the green buses drank down almost as much fuel as conventional buses. Washington, D.C., hybrids broke down twice as often as other buses in the city’s fleet. The Canadian city of Toronto discovered hybrid buses were inefficient because most of the city’s routes consisted of long stretches. It turns out hybrid diesel buses are more cost efficient for stop-and-go routes.

The city of Elk Grove takes the cake. It bought a fleet of 21 hybrid buses for $10 million, all of which now sit rusting in a back lot. The city claims their hybrid buses experienced 30 catastrophic engine failures and had an unpleasant habit of catching on fire. Elk Grove is suing the manufacturer.

John Webster, manager for the San Luis Obispo city transportation department, said hybrid bus technology will probably be a part of the city’s future, but the technology still hasn’t been perfected and costs a lot more than conventional systems.

“Diesel hybrids cost about $205,000 more than the clean diesels we buy,” Webster said. “Then you have to replace the batteries in five or six years. … They are still working the kinks out of the technology.”

Staff Writer Robert McDonald can be reached at rmcdonald@newtimesslo.com.