I got a lot of problems with you people

I live in Morro Bay, light years from Arroyo Grande’s SLO Down Pub, so I don’t go there often. In fact, I’ve only been twice, and both visits were based on the fact that they were the only place in the county doing anything interesting during the holiday weekend. 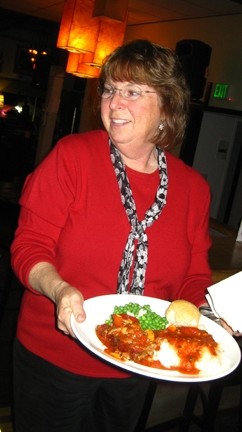 These people might “SLO down,” but they don’t ever stop, unlike vacationing staff writer Glen Starkey, who always gets to spend the season lounging in week old underwear all jolly with friends in front of some fireplace, just ruining carols and not even realizing it after three too many eggnogs.*

No, pub owners Julie and Mark London were busy on Dec. 24 organizing a Festivus celebration based on the classic episode of Seinfeld.

If you’ve never seen the episode, watch it. It’s got Jerry dating a two-face, Kramer returning to work at a bagel shop after a decade long strike, and George having to embrace his family’s uniquely horrible anti-Christmas tradition in order to get out of trouble for faking charity donations. It’s a doozey. 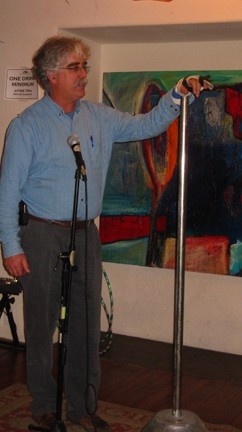 Anyway, Festivus is a made-up holiday that rejects the consumerism and cheer of Christmas by embracing cheap skate-ism and bitterness. It features a plain pole instead of a decorated tree and the “airing of grievances” instead of the giving of gifts. As a serious family holiday, it would be god-awful, but it totally works as an ironic excuse to hang out at a bar on Christmas Eve.

“Some people don’t have family to visit,” said Julie. “We want to give them a place to feel welcome.”

When I arrived at SLO Down Pub, I strolled past the stage, which was set up with a metal pole and a microphone, and made my way for the bar where a group of about eight people was sipping wine. They were all super friendly, but I couldn’t help but be disappointed by the size of the crowd. I was both giddy and thrilled when I found out Festivus was happening during my stint as art basher. Where the hell were all the other Seinfeld fans?

“It takes a while for something like this to catch on,” said Mark. “This is the second year. We’ll do it again next year and see how it goes.”

The evening started with a viewing of the episode. Afterward, my buddy and I smoked cigars like Kramer would have wanted, and then the grievances were aired. It’s hard to complain without coming off as a jerk, but here goes:

• More people should have shown up for Festivus.

• Who cares which grown man is better at throwing balls? Bars should always have Seinfeld on TV instead of sports.

• Politicians in both parties are jerks, but everyone is always convinced that life will be rainbows when their jerk gets elected next year.

• All the addictive things are unhealthy. No one ever gets hooked on salad.

• Some sign at the trailhead tells me I can’t bring my dog on a hike, outdoors, where nature and animals are supposed to be. Screw that.

• Also, I thought my dog had an abscessed tooth or something, so I paid $160 for a vet to tell me he probably got a bug bite when I brought him along for that hike.

• I’m horrible at money. That’s got to be somebody’s fault.

*Probably. At least that’s what I’d do if I got vacation time.

In lieu of gifts, Calendar Editor Nick Powell made a donation in your name to The Human Fund this season. You can thank him at npowell@newtimesslo.com.