I Know This Much Is True is a sprawling, multi-generational look at family interconnectedness

I Know This Much Is True

Writer-director Derek Cianfrance (Blue Valentine, The Place Beyond the Pines, The Light Between Oceans) helms this miniseries based on Wally Lamb's book of the same name, about Dominick Birdsey's attempt to get his paranoid schizophrenic twin brother out of a mental asylum. Both roles are played by Mark Ruffalo. (Six 60-min. episodes) 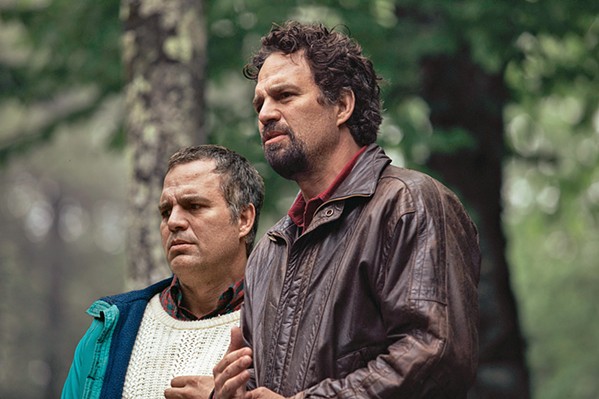 Glen The miniseries format is perfect for a sprawling novel like Lamb's I Know This Much Is True, which spans not only the Birdsey boys' childhood, college years, and middle age, but also their maternal grandfather, Domenico Tempesta (Marcello Fonte), and his brother's early years settling in America, as well as their mother's childhood under their grandfather, told through a personal history written by the grandfather before his death. There are a bunch of other threads, too, such as the Drinkwater clan, which is also intertwined with the Birdseys back to his grandfather. Part of the story also examines the twins' relationship with their stepfather, Ray Birdsey (John Procaccino); their mother, Ma (Melissa Leo); Dominic's relationship with his divorced wife, Dessa (Kathryn Hahn); his current girlfriend, Joy (Imogen Poots); and the people he encounters as he tries to get his brother released: social worker Lisa Sheffer (Rosie O'Donnell), psychiatrist Dr. Patel (Archie Panjabi), and the head of the asylum, Dr. Hume (Bruce Greenwood). As you can see, there are a lot of characters and a lot of intertwined plot threads, but with about a six-hour runtime, these various elements are given the time they need to develop. Ultimately, this is Dominic's story, a story about guilt. Can we ever feel that we've done enough for our loved ones? It's depressing but worth the emotional turmoil.

Anna It's definitely a grim tale, sprawling, tragic, and unforgiving in its moments of grief. Ruffalo is absolutely fantastic playing the two brothers, vastly different characters chained together by blood. Through flashbacks we find that Dominic has always held resentment for Thomas, whether it is when they are young kids and their classmates found his brother to be high maintenance, or college when the idea of rooming with anyone but Dominic would throw Thomas into a huge panic. Now in middle age, the care of his spiraling brother falls heavy on Dominic and he himself is barely holding on. As always, everything else in life takes a back seat to Thomas' mental health and the inherent drama that surrounds him. Like a caged animal, Thomas becomes irrational and violent. He's at one moment tender and achingly sad, at another spouting his paranoid delusions and becoming out of control. It's a pretty heartbreaking watch, but Ruffalo kills it here. Just make sure you're in the right frame of mind for this sad tale.

Glen Because Thomas always sucked the emotional air out of every situation, Dominic never really learned how to manage his own emotional needs, and when he begins meeting with Dr. Patel, ostensibly to help her in her treatment of Thomas, she discovers that Dominic is also broken, but in a different way. Thomas is straight-up delusional, hearing voices, and in the first installment he's committing a truly crazy act that lands him in the asylum. Dominic's issues are more complex—resentment of his needy brother, the challenge of twinhood, a potentially violent stepfather, a lie he told as a child that prefaced a tragedy that he didn't have anything to do with but that still haunts him, a personal tragedy that led to the end of his marriage, and anger issues. He's a complicated and deeply unhappy person who feels like he and his family are cursed, and there's certainly a case to be made that his grandfather Domenico, Dominic's namesake, set in motion a multi-generational string of misfortune that has followed the family through the years. He believes that the sins of the father (or in this case grandfather) are visited on the son. What really seems to be at work is a repetition of the same family character flaws, genetic mental illness, and poor decision-making and coping skills. The story is less about saving Thomas and more about Dominic learning to break old cycles, forgive himself, and move forward. I read the book's plot synopsis after watching the mini-series, and the endings share the same tone but are somewhat different, I think because the book's ending would have seemed too farfetched and neat for the mini-series. I will say this: As dark and depressing as the miniseries is, it offers a glimmer of hope that Dominic can move forward. Steel yourself, and then dive in. It's an emotional roller coaster worth riding.

Anna It's beautifully shot as well. The cinematography of the fictional town Three Rivers is breathtaking, and the work they did putting Ruffalo in scenes as both brothers was pretty flawless. Same with Phillip Ettinger, who plays the teenaged twins. Both he and the twin boys (Donnie and Rocco Masihi) who played the elementary school age Thomas and Dominic did a wonderful job. Dominic's world would not be perfect without Thomas in it. He still holds a candle for his ex-wife, Dessa, and a seething grudge against his stepfather, Ray. Tragedy has changed every aspect of his life, and he feels a bit like a broken shell. What more can this world ask of him? This one is meant to be watched closely, and though its six-hour runtime doesn't work for the big screen, it deserves the kind of attention you give to films in the theater. Clear away your distractions and settle in for this haunting drama. Δ