I sing, you sing, we all sing

'Tis the season for public humiliation

There are two types of people in the world: those who should sing in public, and those who—without question—should not. Because that no-good pervert Starkey (he’s also the Shredder, you know) is “staycationing” in his backyard for the next two weeks, I have no choice but to attend an event frequented by people who fall into the latter category, because even the worst of singers seem to believe the holidays afford a temporary moratorium on the no-singing-in-public rule.

The PAC is billing the show—the Forbes Pipe Organ Holiday Concert and Sing-along, going down Dec. 20 at 3 p.m.—as a “traditional holiday show with an interactive twist.” Damn that interactive twist! What’s wrong with good-old-fashioned tradition? Also, what idiot invented the word staycation? You’re either going on vacation or you’re sitting in your backyard drinking Pabst all day, and the latter is not a vacation, especially if it’s the same nonsense you pull every day, and sometimes in your underwear. 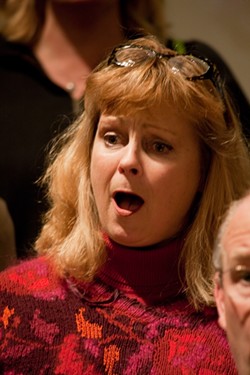 The Forbes Pipe Organ Holiday Concert and Sing-along is an annual holiday tradition at the Performing Arts Center. The Vocal Arts Ensemble performs. Four of the Children’s Choirs’ six groups are singing. Paul Woodring is tickling the pipe organ’s ivories, or whatever it is you call the keys of an instrument as magnificent as the Forbes pipe organ. And the audience joins the choruses in a handful of carols.

The set list is impressive; between the half-dozen choirs and audience-participation carols, just about every major holiday song is covered. “Deck the Halls,” “Silent Night,” “Twelve Days of Christmas,” “Jingle Bells,” “White Christmas,” “Joy to the World,” Angels We Have Heard on High,” it’s like a freaking who’s who of snow and boughs and mistletoe and partridges in pear trees, a kaleidoscope of tradition and wintry wonderlands for Californians parched by sun and palm trees. But it’s not an easy job creating a holiday set list, according to university organist Woodring.

“As a musician at Christmas time, it can be a little odd because we’ve got such a split personality about what Christmas is,” he explained. “It can be difficult to come up with a program that doesn’t feel too church-y on the one hand and too commercial on the other.”

Woodring’s performance on the pipe organ bookends the entire event; he plays both a prelude and postlude. Having participated every year, he’s observed how the audience fares during the participatory segment. “Frosty the Snowman” didn’t work out so well. All those thumpity thumps at the end apparently create some confusion. But when “Jingle Bells” comes around, voices swell to a collective roar.

The PAC supplies the lyrics to minimize confused word-mashing, and Gary Lamprecht, founder and director of the SLO Vocal Arts Ensemble, bravely leads the audience, providing encouragement when necessary. As the ringleader, Lamprecht loosens up his audience—which always includes a few wise reluctant singers—by being chatty and informal.

For anyone drawn to the rare opportunity to engage in a fraternal bout of caroling but (like me) reluctant to subject strangers to a voice like a hyena in heat, Melody Svennungsen, a director for the Children’s Choir, has a few tips. The first is to warm up your voice. While selecting your sing-along outfit (red holiday sweater emblazoned with Rudolph versus green Frosty sweater) hum a little bit to warm up your vocal chords. Also, try a few scales. If you remember your Sound of Music (and you should), do, re, mi, fa, so, la, ti, do is always a good standby. You know, “doe a deer, a female deer, ray a drop of golden sun.” If you happen to be over the age of 10, warm up in your closet.

“Singing is a lot more about exposing your soul than any other kind of music. Everybody can sing,” Svennungsen assured. “It’s a learned behavior. We’re innately able to sing. But our culture doesn’t value that. We let the pop stars dictate to us what music is.”

Not to undermine her professional opinion, but clearly Svennungsen hasn’t heard me sing—or anyone else I know, for that matter. That said, what is Christmas for if not collectively humiliating ourselves belting out “Silver Bells?”