I triple dog dare you!

The holidays aren't complete without A Christmas Story!

“I want an official Red Ryder carbine-action, 200-shot Range Model air rifle with a compass and this thing which tells time built right in to the stock!” 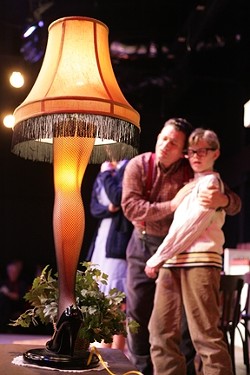 I have heard this line about one million times in the last few weeks, and it’s not because I’ve been watching an A Christmas Story marathon. It’s because The Little Man, aka Jaden Robertshaw, my fiancée’s 9-year-old son, with whom I live, has a part in the SLO Little Theatre’s production of A Christmas Story.

No, he isn’t playing Ralphie, but he seems to know Ralphie’s lines—especially the one that goes “I want an official Red Ryder carbine-action, 200-shot Range Model air rifle with a compass and this thing which tells time built right in to the stock,” which he recites breathlessly at breakneck speed.

Like his mother, Anna the ballet dancer, and his father, Josh Feldman the musician, Jaden has caught the performance bug. He plays Ralphie’s little brother Randy, which means he gets to stick his face in a bowl of oatmeal, pee on Santa’s lap, and be bundled up until he looks like the Pillsbury Dough Boy with a scarf, hat, and mittens.

Anna and I head to the 150-seat theater on Sunday, Dec. 10, and as I read through the program, I see that Jaden has thanked “his mom, dad, step dad, and grandparents, and the rest of his family and friends for all their encouragement.” Did you see that? “Step dad” at No. 3! Take that, grandparents! I rule!

As we sit back and watch the show unfold, I remember my own checkered theater past when I was about Jaden’s age, my turn as the Artful Dodger, the time I played a drunken prospector (with sweetened ice tea standing in for whiskey). These were minor school plays, but the SLO Little Theatre is the real deal. Jaden has stepped immediately into the big time! 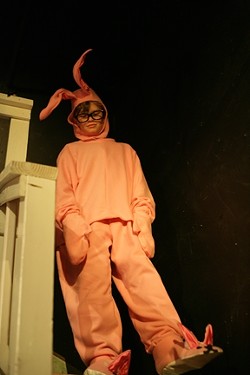 Yet watching him these past months trudging off to 6 p.m. rehearsals and sometimes not returning until 10 p.m. on a school night, fitting in homework whenever he can, waking up bleary eyed for his 8:20 a.m. class, I wonder if it’s all worth it.

He’s clearly reveling in his time on stage, and seeing this beloved film unfold live with real actors right before my eyes is charming to say the least. The whole story is there—the bullying Farkas, the tongue on the frozen lamppost, the turkey-stealing neighborhood dogs, the pink bunny costume, the Santa scene and slide, and the “major prize” leg lamp.

I defy anyone not to enjoy this tale of boyhood dreams.

As for Jaden, he’s already talking about wanting to do another play, a musical maybe, but that’s not the half of it.

“What I really want to do,” he tells me later at home, “is direct.”