Experience the queen of cleavage

There’s no other way to say it: Candye Kane’s boobs are redonkulous! They’re so big they have smaller satellite boobs in orbit around them. They’re so gynormous that when she backs up, they go beep, beep, beep. Her boobs are the reason clothing designers had to change “One size fits all” to “One size fits most.” In fact, they’re so massive they think Barnum & Bailey are clothing designers. Whew! They’re just plain BIG!

The self-described plus-size, bisexual, ex-sex worker’s cleavage starts right below her neck and plunges down into the nether regions of whatever risqué top she’s sporting. Fat plumbers, eat your hearts out. You can only dream of a crack like that!

Kane, the six-time winner of Best Blues Band at the San Diego Music Awards has also been a three-time nominee for the 2010 National Blues Foundation Awards for “BB King Entertainer of the Year,” “Best Blues Contemporary CD,” and “Best Contemporary Blues Female” (the highest honors for blues artists). This tough cookie also gave the beat-down to pancreatic cancer in the last two years.

According to her bio, by her mid-20s Kane had been a gang member, single mom, exotic dancer, and punk rock musician—just the kind of f-ed up life that puts the blues into blues singers. Dressed in feathers and sequins, the performer belts ‘em out in the tradition of Big Momma Thornton, Etta James, and Bessie Smith, delivering blues, rockabilly, and jazz tunes.

Before we get to Friday, though, Downtown Brew has a few other tricks up its sleeve, starting Thursday, June 24, when the club hosts a Chile Earthquake Benefit Concert & Raffle with the Zongo! All-Stars and Threes and Nines (7:30 p.m.; all ages; $15 presale or $20 at the door). According to organizers, “The Terra Foundation, Downtown Brew, Coalition, and Maule Wear present a fabulous night of music, prizes, good friends. All proceeds from what will prove to be a fantastic evening will benefit members of the community of Curanipe, Chile, which was hard hit in the late February earthquake and tsunami and continues to need our support. Proceeds will go directly to families in Curanipe in the form of grants to be used to assist with the reconstruction of their homes.”

On Sunday, June 27, check out punk-inflected rock act Authority Zero (8 p.m.; all ages; $12). If you’re a Rage Against the Machine fan, these guys are right up your alley, but you’ll also recognize such influences as Bad Religion, Dick Dale, Manu Chao, and Sublime. 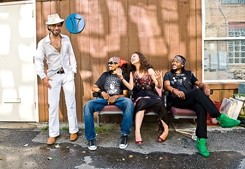 On Wednesday, June 30, coming straight outta Brooklyn, The Pimps of Joytime hits Downtown Brew (8 p.m.; all ages; $5 presale or $6 ay the door). The funky quartet is fronted by bandleader Brian J, who delivers “infectious dance grooves and indelible melodies.” Brian honed his craft as a multi-instrumentalist and producer in New York City, New Orleans, and Los Angeles, and in 2005 he began to assemble a group of “righteously soulful vocalists and musicians to assist in bringing to life the musical concept that would become The Pimps of Joytime.” If you dig Afrobeat, salsa, rock’n’roll, and electronica, you’re gonna love their audacious sound. Also, look for their new album, Janxta Funk! 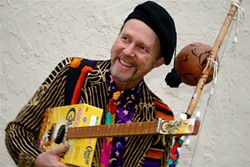 Get in touch with your inner musician!

I just spent a whole weekend with Joe Craven at the Live Oak Music Festival, and I still haven’t had my fill. That’s because the multi-instrumentalist and snappy dresser (many of his shirts are seizure-inducing!) is endlessly inventive, relentlessly entertaining, and a genuine artist.

In the workshop, this award-winning creativity educator proves that anyone can “sing, keep a beat, and make music confidently with other people.” He’ll inspire you with his ideas and tools, teaching you to use whatever’s in your “toolbox”: rhythm, solos, singing, good manners, whatever!

During the concert, you’ll discover why Joe’s called a musical archeologist who believes that “Music that’s informally made and shared is the hallmark of folk music and it is this spirit of art making that leads to a more creative life of the artist and the listener.”  He’s got a Bachelor of Arts degree in Museology and Aesthetics, he managed an art gallery, and as a visual artist he exhibited his own work in galleries from San Francisco to Santa Fe. The man’s creativity knows no bounds, and he’s completely comfortable in all genres: folk, rock, blues, jazz, and world traditions.

Cityzen is returning Thursday, June 24, at 10 p.m. in the Frog and Peach. “We have a unique stage presence since our lead singer is a quadriplegic with a killer voice, who is very animated and theatrical,” said Jeff from the band. “The rest of the band is comprised of talented and highly energetic musicians featuring a violin and sax player. This is definitely a unique show and you don’t want to miss it. Plus, our favorite band eEnik will be opening the show; they’re awesome!”

The Central Coast’s favorite dance band, The Mighty Croon Dogs, will bring their genre-bending, infectious, good time music to Paso’s City Park this Friday, June 25 from 5:30 to 7:30 p.m. As always, this concert is free!

While down at Live Oak last weekend, I got to enjoy the sweet sounds of The Sweetback Sisters, an extraordinary New York-based country swing band, which plays Friday, June 25 at 8 p.m. in Painted Sky Studios as part of their first western States tour. When the band’s management contacted Steve Crimmel to see if he’d book them, it took all of about one minute listening to their music on their website for him to call back and say, “You bet, I’ll book them.” They’ve appeared on A Prairie Home Companion and played plenty of festivals back east. See what all the fuss is about by calling 927-8330 for $18 tickets, or buy them up at Boo Boo’s or the Cambria Business Center.

Babylon Saints return to the Frog and Peach this Friday, June 25, at 10 p.m. for an encore engagement. “Our debut release with Citation Records has really helped put us on and all over the map,” said frontman Matt Gerovac. “We’ll be touring the U.S. in June and July, doing it completely on our own—self-managed, self-booked, and self-promoted—starting in SLO. Through all our work and with a little help from Citation Records, we’ve even been getting some sporadic radio play—everywhere from Oregon to Puerto Rico to the U.K. So, kind of random, but it’s all positive.”

Mud Thump opens for Poor Man’s Poison at The Clubhouse this Friday, June 25 at 7 p.m. Poor Man’s bio says, “One must remember to be grateful for all the things we already have. Once you truly embrace the feeling of gratitude, you will find yourself standing, making things happen, and earning the right to be successful. Poor Man’s Poison is a four-piece, all-acoustic band from a small town called Hanford, located in the Central Valley of California. We are very grateful to have the opportunity to share our passion with all of you taking the time to listen.” Meanwhile, “Mudthump is a California-grass band from the Central Coast. New old-time that combines guitar, banjo, mandolin, upright bass, and strong harmonies. They’re just a bunch of country boys who love to sing and play bluegrass ‘cause that’s what makes ‘em happy. Their lively originals make you stomp your feet and sing along, so git yer boots on and come join ‘em!” The cover’s $8 at the door. By the way, Poor Man’s Poison will be playing at Mr. Rick’s on Saturday, June 26 at 2 p.m. on the patio. 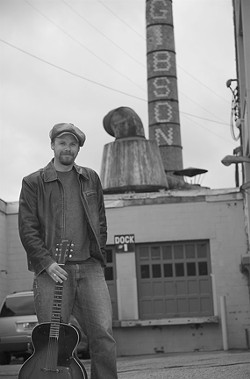 The oldest bar in the county, San Miguel’s Elkhorn, is about to get its most well-matched entertainer in Matt Sayles, a Mid-Western born and bred folk artist whose confident picking, narratives tales of love and loss, and dusty voice will transport the storied bar to its days of yore. His newest offering, Wilson’s Hotel, is filled with western tales, workingman tragedies, and ironic humor. See him on Saturday, June 26. 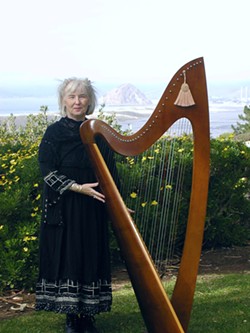 Celtic harpist and teacher Valerie Cardill has been described as “a true itinerant bardess,” playing small and intimate settings that have been described as “an evening by the fire.” With a lovely, lilting, ethereal voice and dulcet sounds of the harp, she’ll transport you to a magic place where all your cares will melt away. See her Sunday, June 27 at Coalesce Bookstore (2 p.m.; all ages; $10; 772-2880).

On Sunday, June 27, N.Y.C pianist Cecilia Coleman appears at the Famous Jazz Artist Series at the Hamlet in Cambria. Coleman, regarded as one of the East Coast’s leading jazz piano artists due to her many award-winning recordings, will be joined by two outstanding Central Coast players, Dylan Johnson on bass and Darrell Voss on drums. Series co-producers Charlie and Sandi Shoemake (vibraphone and vocals) will also be on hand. There’s a 4 p.m. set for $15, a 7:15 p.m. set for $12, or see both for $20. Call 927-0567 for reservations.

New SLO Town resident Jenn Haase, a Los Angeles native, recently told me she’s happy to be free from the fast-paced city and now calling San Luis Obispo home. She was given a guitar by her father at 15, leading to her continuing passion for singing and songwriting. Part of the Hollywood music scene since 1998, she’s played venues such as The Cat Club, Tangiers, Tribal Café, The Pig and Whistle, and the famous Whiskey a Go Go on the Sunset Strip. I haven’t heard her yet, but her bio claims “incredible vocal stylings and profound original lyrics [that] tell of her life experiences, hopes, and dreams. Jenn’s original sultry songstress style will touch your soul, capture your heart and leave you wanting more.” Welcome aboard, Jenn. Check her out on Tuesday, June 29 at The Clubhouse when she’s the featured performer during the songwriter’s showcase, which stars at 6:30 p.m.

Police tribute band Black Sting hits Frog and Peach next Thursday, July 1 (10 p.m.; free), delivering an evening of classic ska-influenced Police songs. The trio includes drummer Lucas Carlton, who grew up in SLO but has since gone on to conquer the world with fellow band members Brian Rogers (bass, vocals) and Murph (guitar) in the original rock band Izabella. “We’ve been having a lot of fun putting this side project together!” said Lucas.

Soundcheck—the Central Coast’s only all-inclusive music resource—is coming out again in August, and we’re working on updating our listings. If you didn’t make last year’s issue, send your info (band/artist name, genre(s), contact name and phone number/email, URL if you have it, and a brief (50 words or fewer) description of your band to soundcheck@newtimesslo.com. You can also submit a high-resolution photo (at least 4 inches by 6 inches, 200 dpi) for possible inclusion. If you’re a music-related business, music teacher, promoter, record label, venue, club, festival, etc., we want your info too. This year Soundcheck will also include artists and businesses from northern Santa Barbara County.