Iconic local puppeteer Don Wallis will read from his new collection of poetry on Oct. 19 at Linnaea's Café

You’ve seen him. If you’ve lived in SLO Town for more than a year or two, you can’t help but to have run across Don Wallis, with his broom-like mustache, twinkling eyes, and mischievous smile. 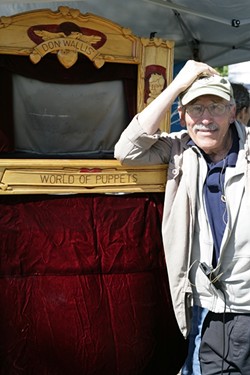 During the Vietnam War, he did alternative Conscientious Objector service in Berkeley, suffered a mental breakdown after the ’69 Berkeley riots, eventually recovered in SLO, and went on to spend a life in the arts. He founded and directed two local theater groups, acted in 100 roles on stage and radio—including one-man shows as Mark Twain and John Muir-—and performed more than 9,000 puppet shows.

More than 60 of his poems have been published in newspapers and magazines, he’s given more than 900 public readings (from 1964 to the present), and his first book of poetry—Two Provincial Voices: Selected Poems of James D. Owen and Don Wallis—was published by Hi Valley Press in the early ’70s. Now, 40 years later, he’s released his second book.

“I’ve written over a thousand poems, but my way of polishing them is to let them age,” Wallis says over a decaf Americano on the patio of Linnaea’s Café. “They’re so personal, and I’m trying to go for the universal. And I was so busy performing them, reading them.”

While obviously personal, Wallis’ poems are also immediately accessible, communicating emotions common to everyone. They’re like glimpses into open windows, where we get a little slice of life—a slice that resonates on multiple levels as it connects to our own experiences.

“I hope they come from Yeats and Frost with a dash of Pound and Eliot, but only a dash. I’m more of a country bumpkin trying to talk to himself,” Wallis quips humbly as we discuss how too much contemporary poetry purposely obfuscates and complicates rather than connects.

“Everyone’s fishing for a grand ‘concept’ even though they have this whole life within themselves. To me, the feeling is the big, big thing, but [culturally] we tend to get away from the emotional side because we’re scared of sentimentality,” he says.

Wallis reveals his crossroads after the Berkeley riots, where his mind shut itself off and he was adrift until friends returned him to a clinic in SLO and he began his long recovery. Like many artists, Wallis is empathic, but allowing oneself to feel the world’s pain can be a heavy burden. He laments that we’re still emphasizing “competition rather than collaboration,” but his life in the arts has been its own kind of therapy.

“I returned to heal myself mentally and emotionally.”

The title poem speaks to Wallis’ 30-year career as a puppeteer and about the joys of performance. “Until I get all warmed up in the heart,” he writes of performing in “The Puppet Man,” turning on its head the notion that the audience receives and the artist gives. But why title the collection The Puppet Man? Why not The Artist, The Actor, The Author, or The Activist? All equally fit Wallis.

“Puppets were a real business for a while. This became my identity in my hometown. Only a few hundred people know me as a poet or writer or artist. One of my artistic and spiritual practices is drawing. To me, it’s one of the most meditative activities. But puppetry was my vehicle to maintain my participation in the community. It’s my way of communication and willfully belonging. In the ’60s as an artist, you either moved to New York or you went grassroots and went back to where you came from to share what you’ve got to share.”

As this thoughtful collection proves, Wallis has a lot to share. From “Poetry and Art,” Wallis writes, “Some days I’m afraid and a coward/ With a long day ahead to think… /And who but the other boys/ Like Tolstoy would climb up on a tractor/ To greet another sunrise/ And plow the earth until it sets… / Or like Hemingway/ Would squeeze their Teddy Bear/ One last time before/ They crawl up out of a trench/ To face a bullet or a bayonet?”