The Monterey Bay Aquarium is a view into another world!

I’m embarrassed to say that up until a few weeks ago, I’d never been to the Monterey Bay Aquarium, even though it’s just a 2 1/2 hour jaunt to the north. I’d heard the rave reviews from people gushing about how cute the sea otters are (that exhibit was closed on my visit, so I still don’t know) or how amazing and trippy the jellyfish tanks are (too true!), but like a New Yorker, my Empire State Building would always be there, so I was in no rush ride to the top and see the view.

Dumb! Now that I’ve been once, I’m ready to return.

If you’ve been meaning to but have never gone, quit waiting and plan a trip to this amazing place. If you’ve got kids who have never been, it’s even more urgent! They’ll never forget this experience. 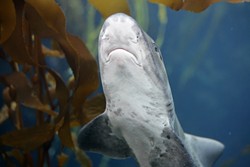 The two main tanks are two stories tall, and you’ll get a view of these incredibly realistic, natural habitats as only a SCUBA diver gets. Enter a kelp forest and watch leopard sharks glide silently in from of you, or go to the open sea tank and watch the ocean’s fighter jets—blue fin tuna—race by with their silver skins reflecting light filtering down from above. A hammerhead shares space with gentle sunfish. A sea turtle heads for the surface as stingrays glide along the sandy floor.

As wild as the big tanks are, I loved the little ones filled with such strange creatures as leafy sea dragons or strange anemones. Or the tangled mess of a dozen jellyfish, so beautiful yet deadly.

There are also plenty of tanks where you’re invited to reach in and touch (gentle, please!) the sea life, or interactive displays where kids can crawl in and explore. 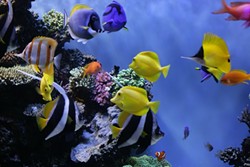 It’s easy to spend the whole day there and never see it all, but be warned: It’s not cheap. Adult day passes cost almost $35, and kids younger than 12 will set you back about $22. Also, unless you want to pay through the nose, pack a lunch. Not only is the aquarium café expensive, so are all the restaurants in the Cannery Row area. Also, plan to spend about $15 on parking.

But finally, it’s a fish tank that doesn’t seem depressing and claustrophobic!