The sensationalized themes shouted by pundits and protestors nationwide are making their way into local discussions, specifically in the campaign for one of the seats on the San Luis Obispo County Board of Supervisors. Jim Patterson has held the position for seven years already, during which time his detractors painted him as a reckless spender and an overzealous environmentalist, eager to regulate everything from digging a hole to picking boogers. His challenger, Debbie Arnold, has been criticized as rabidly anti-government, a tea-party tax-hater who wants to give business interests free range to ravage the county.

Of course, neither caricature provides a complete picture.

Most of the criticism lobbed at Patterson centers on his support for long-range goals, such as the countywide Water Quality Control Plan, which contains elements that, if enforced, would demand that run-off from farms be as clean as bottled water. Then there’s the Energy Wise Plan, which includes suggestions that the county require all houses to be equipped with solar panels before they can be sold, a restriction that Arnold said would only serve to hurt an already suffering economy.

“First it was the Climate Action Plan. Then it changed midstream to the Energy Wise Plan,” Arnold said. “I feel it’s being marketed so we’ll swallow it.”

In Patterson’s defense, the plans only include goals at this point. None of the suggestions have been adopted into county code.

“We’re not going to say, ‘You shall, you shall,’” Patterson said. “We’ll have hearings and give the public a chance to comment and help us decide which programs to implement.”

The plans themselves are the result of state laws like Assembly Bill 32, which will cap green house gas emissions at 1990 levels by 2020. The law requires counties and cities to implement the necessary measures in their jurisdictions. Proposition 23 would have repealed the law, but Californians voted to keep the eco-friendly regulations in place. Patterson noted that the proposition failed among SLO County voters, as well.

“The voters have validated the law,” Patterson said. “It’s something they want.”

Patterson said he was less concerned with home energy consumption anyway, and more worried about carbon emissions from commuting. He said that too many people work in SLO while living in more affordable, outlying areas. As an Atascadero resident, Patterson finds himself in the same situation. He supports areas of the Energy Wise Plan that would create houses near SLO and jobs in developing areas like Shandon.

“They want everyone living in city centers with empty open spaces in between,” Arnold said. “A lot of students and seniors would enjoy that lifestyle, but many people move here for small towns and rural lifestyle. Do we really want to take that choice away?”

The residents of District 5—which includes Atascadero; parts of San Luis Obispo; and the unincorporated areas of Creston, Pozo, Santa Margarita, and California Valley—will decide June 5 whether they want to stick with Patterson’s smart growth ideals or switch it up with Arnold’s free-market approach.

Throw a stone in Santa Margarita, and it’ll probably hit someone who’s upset about over-regulation at the county level. Several residents of the rural town told New Times that problems with permitting turned their simple building endeavors into bureaucratic nightmares.

The Santa Margarita Tavern, for instance, started pouring drinks in January, but only after battling county planners for more than a year. Owner Bill Crawford applied for the first of five necessary permits in October 2011. His lot was already zoned for commercial retail, but he needed a minor use permit from the county to greenlight the very idea of tearing down the existing establishment to build a bar. That process alone cost him four months and $4,307 in fees.

A review of activities associated with the actual building permit shows that Crawford needed county approval at 51 points during construction. He dealt with 21 different county staffers and paid $6,896 for blueprint reviews and inspections of everything from the gas line to the drywall and grouting. By the time it was all over, he’d spent more than $13,000 navigating red tape.

“They say they want to promote business, but that’s hard to believe when there’s so many rules and fees,” Crawford said in a phone interview.

Another Santa Margarita resident, George Sullivan, has encountered similar problems with county planners. He owns a lot that’s zoned for commercial retail, but he said that developing it in this economy would be a waste of money. Instead, he decided to plant a pomegranate orchard and use the land temporarily for agriculture, which was perfectly acceptable under zoning codes. Absolutely unacceptable, though, would be to build a quaint windmill and use it to pump water from a well into a 27-foot tower that could irrigate the orchard.

“[The County] asked why it had to be above ground,” Sullivan said. “I had to explain that water runs downhill.”

The tower’s proposed height is well below building restrictions. That isn’t the problem. Sullivan can’t build because land use ordinances only allow agricultural accessories to be permitted on land that’s zoned for agriculture.

“I’m allowed to use the land for ag, but they disallow any ag accessories,” Sullivan said. “They won’t let me build the stuff it takes to put the land to use.”

That technicality has spurred two years of bickering with officials over something Sullivan thought would add to the town’s rustic character.

“I understand rules, but some things are so benign, and they still push back,” Sullivan said. “It’s laughable that they’re protesting this.”

Arnold isn’t laughing. Her biggest, loudest, and, well, only complaint against the way the county currently runs is its tendency toward what she characterizes as micromanagement and over-regulation. She credits Patterson with helping to pass thousands of pages of ordinances and binding plans that make doing business difficult and slow.

“There are about 25 new regulations in the pipeline at any given time,” Arnold said. “Are you going to feel confident about expansion or relocating in this county with the time and money it will take to wade through all these policies?”

Arnold contests that an abundance of ordinances also creates a bigger workload for staffers, requiring more county employees. Although comparing counties is hardly an exact science, Monterey is similar to SLO in terms of demographics, and its planning department employs 36 people. It takes 84 people to ensure that any construction meets SLO County’s standards.

Arnold told New Times she wanted to curb excessive regulation, but she offered no specifics on which ordinances she’d strive to repeal, nor could she point to successful attempts at reducing regulations during her tenure as former supervisor Mike Ryan’s legislative assistant.

However, she said that as an agricultural field representative to former assemblyman, now state Sen. Sam Blakeslee, she organized a coalition of local stakeholders to neuter a bill that would have expanded the California Department of Conservation’s powers to punish people who build on ag land and open space areas.

Arnold also helped Blakeslee draft legislation that would have forced the California Environmental Protection Agency to evaluate potential economic impacts before implementing new policies, but the law failed to pass. As did a bill that would have created pilot programs giving small farms creative wiggle room to capture and clean water run-off without facing excessive fines.

Arnold said she never wanted to be a politician, but felt she had to run when no one else stepped up to oppose Patterson in 2008. For her, nothing has changed going into the 2012 election.

“These ‘one size fits all’ regulations take away our flexibility,” she said. “If you want bigger, more expansive government, [Patterson’s] your choice.”

Man of many projects 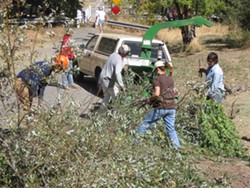 Of course, Patterson doesn’t see it that way. He told New Times he uses a governing style based on projects, specific efforts that address real community needs in ways the private sector never would or could. He said he strives to bring people and resources together for things like new fire stations and improved infrastructure to prevent flooding.

In the free market, flood victims simply pay the most affordable contractor they can find to repair the water damage every time a waterway like Yerba Buena Creek overflows. For Heidi Petersen of Santa Margarita, that bill hit the $10,000 range once every three years. She was getting sick of it, so in 2006, she and another neighbor sought a permit from the California Department of Fish and Game to remove a mess of broken branches from the creek bed and improve water flow. Things got complicated when the United States Department of Fish and Wildlife stepped in to stop the process in order to protect red-legged frogs, a threatened species protected by state law.

Petersen then reached out to Patterson, who was able to coordinate between the two bureaucracies to get a permit that would allow volunteers to clear the creek bed. He also secured $600,000 from Public Works to build new culverts and improve ditches throughout town. The creek hasn’t flooded since.

“We’ve gotten so much done because he pushed Public Works,” Petersen said. “I don’t know how we would’ve done it without them.”

The residents of Creston might say the same thing ever since Patterson spearheaded the effort to get them a fancy new fire station. The three-year project cost $3.6 million, with the facility set to open in June.

“The design, the layout, the whole process there has been incredible,” Deputy Chief Rick Swan said.

According to Swan, the improved station will give the public better access to safety personnel and serve as an emergency shelter should something terrible happen. Its barn-like design was based on community input from numerous meetings, which Patterson regularly attended, Swan said. He even credits the supervisor with picking and planting the drought and fire tolerant plants that make up the landscaping.

Patterson’s most obvious accomplishments in office have to be the two solar plants he helped establish in the Carrizo Plain, one of which is the largest in the world. Despite some controversy, the projects arguably scored Patterson points in two columns: job creation and environmentalism.

“Those solar jobs are a big deal for our county, and Jim was instrumental in that,” said Mark Simonin, a representative of the International Brotherhood of Electrical Workers.

Perhaps more noteworthy than the projects themselves is the fact that the county was able to complete them during a period of prolonged revenue losses without overspending the budget. According to Patterson, the Board of Supervisors downsized government by 10 to 11 percent to accommodate the recession. It also instituted a two-tiered pension reform plan estimated to save the county $16 million per year.

Arnold acknowledged the board’s budget balancing skills, but she said she wasn’t impressed.

“To them, the county government is the entire universe,” Arnold said. “They brought their budget under control, and good for them, but I’m trying to talk about how to fix the economy.” ∆