If only in my dreams: From first responders to bartenders, these SLO County residents are on the clock for the holidays

Photo By Jayson Mellom THE HALLS ARE DECKED Christmas decorations are a big deal at the Madonna Inn, where nearly every available surface is covered with roughly $3,000 worth of festive decor at the beginning of November.

Christmas 2015 was a particularly memorable one for Adan Orozco. He and his family spent much of that day together—laughing, eating, and opening gifts—and Orozco couldn't wait to watch his then 4-year-old son unwrap the year's big present.

When the time finally came, everyone gathered around Orozco's son to watch. But just as he was about to tear paper from package, the alarms started up—bells wailing and red lights flashing throughout the fire station.

There was an emergency, and Orozco and his fellow firefighters were needed. When Orozco got back to the station later, the gift had already been opened, and the moment had passed.

"Sometimes it wears on you," Orozco told New Times. "Especially if you're missing anniversaries or your kids' birthdays." 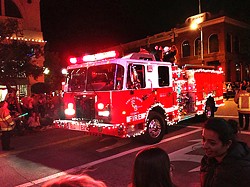 Orozco, a fire captain with the San Luis Obispo County Fire Department, is one of hundreds of SLO County residents who often have to trade in boughs of holly and Yuletide carols for ambulances, aprons, and customers. From first responders and doctors to waitresses and cooks, people from all walks of life spend their Thanksgivings, Christmases, and New Year's Eves putting out fires, saving lives, mixing cocktails, and whipping up fresh meals so that the rest of us can enjoy a little time with loved ones.

A lot goes into the work done during the holidays, and a lot of it goes unnoticed, but it's not all bad. In some fields, there are unprecedented amounts of money to be made, and in others, free food with good friends.

At Orozco's fire station, they host family days during holiday shifts. The firefighters bring their kids and spouses to the station, have a big potluck, play games, and spend time together. If an emergency call comes in, Orozco said the firefighters leave to take care of it, then return to more fun.

It tends to be busy at the station during major holidays—more travel means more accidents, and the same goes for alcohol—but Orozco said he and his co-workers do what they can to celebrate. Although he's only spent about three Christmases in 20 years at home, Orozco said he loves the feasts he and his co-workers cook together. It's a diverse group of firefighters, so Orozco has tried staple dishes from an array of cultures.

"So when we get stuck on duty, we make the best of it," he said.

Employees at the Madonna Inn know what it means to work hard on the holidays, too. It's not quite as high stakes as saving lives, but Amanda Rich, the inn's artistic director, said Thanksgiving and Christmas are its two busiest days—so busy that working holidays is a hiring requirement. 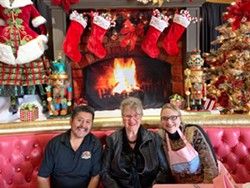 About 175 Madonna Inn employees work 12-hour shifts on Thanksgiving and Christmas each year. The whole hotel is open, but Rich said the steakhouse brings in the most guests, and this year it has a whopping 1,700 dinner reservations for Thanksgiving day alone. It can't take any more, but Rich said there's a waitlist, and people are on that, too.

Cooks at the Madonna Inn make roughly 2,000 dinner rolls and about 1,600 pounds of turkey on Thanksgiving each year, and Rich said roughly 1,000 desserts are sold the week of.

Over the years, Rich has found that many families don't want to do the cooking, cleaning, and spending required on a big holiday like Thanksgiving, but they still want a festive experience. Some celebrate at the Madonna Inn for the food—the steakhouse serves up specialty duck, ham, and turkey on Thanksgiving, and items from the regular menu are still available—and others come for the $3,000 worth of Christmas decorations that go up at the start of November.

Either way, Rich said, "a lot of people have made it their family tradition."

And putting the bash on is hard work. Even the decorations—which Rich took charge of about 10 years ago after Phyllis Madonna herself had done it for years—require a road trip to an LA-based Christmas market months ahead of time.

Though it's not the way most people imagine spending their holidays, Rich said the majority of Madonna employees are happy to do it—if not for the sake of bringing joy to families across the Central Coast, then at least for the holly jolly tips.

It's the same at Luna Red, according to Assistant General Manager Cara Fimbres, which will be open for Thanksgiving for the second time with a special menu this year. A surprising number of people like to eat out on Thanksgiving, Fimbres said, and Luna Red is one of the few restaurants offering a cozy and festive environment. It's tough for employees, but they volunteer to work Thanksgiving, and the list of those willing fills up fast.

"While we all have families and friends we enjoy spending holidays with," Fimbres wrote in email to New Times, "we're part of the hospitality industry so we can provide a great experience for others."

The way they see it, it's all just part of the job, and that's how Lt. John Villanti of the San Luis Obispo Police Department views things too.

After 22 years in law enforcement, getting saddled with the holiday shift is all Villanti knows. Like the fire department, officers on holiday patrol at SLOPD have potlucks that family members attend. Unlike the fire department, most holidays are pretty quiet for our city's police with much of the college student population out of town.

Unfortunately, Villanti said he's made many holiday arrests involving drunken family fights. It's sad to see, he said, when officers want so badly to be at home with their families and these families can't even get along for one day. But, he said, it's inevitable.

"We try and have a good time," Villanti said, laughing, "even though we sometimes have to arrest people." Δ

Staff Writer Kasey Bubnash is trying not to get arrested this holiday season. She can be reached at kbubnash@newtimesslo.com.