If the spirit moves you 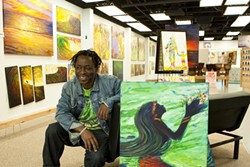 He’s not kidding. When Onikoyi makes art, he’s constantly in motion, cranking up some hot James Brown and grooving in front of the easel until the early hours of the morning. His brush is dancing too, articulating fiery skies, emerald waves, and rainbows radiating off joyous souls—who are, more often than not, also dancing. Often Okinoyi’s brush only goes still around the time the first salary-earners are groggily hitting their snooze buttons.

There was a time, however, when he counted himself among them, these office-dwellers, commuters, city slickers. At 17, Onikoyi moved to Chicago from his hometown of Lagos, Nigeria, pursuing a career in advertising. He worked in Chicago, then San Francisco, then Detroit. He moved to Nigeria again to be near his family, then moved back to the United States because the pace of life in Nigeria now seemed too slow. Then it was off to Atlanta, then Chicago again, and Hawaii, where a spell of unemployment led Onikoyi to pick up painting. His mission, he explained, was to create something more vibrant than what he saw in contemporary art galleries.

“I wanted a different kind of painting,” he said. “The paintings in galleries, like the Museum of Modern Art, they’re very still. They don’t generate any excitement, like wow.” He widened his eyes, fanning out his palms. “I wanted to be more expressive. I want it to be wow.”

Around 10 years ago, Okinoyi moved to the Central Coast. Eight years ago, he opened Spirits of Africa, the space where he sells and showcases his work. Recently, however, Onikoyi relocated the gallery from its longtime location in the SLO Creamery to the more visible 672 Higuera St. (roughly between West End and Tom’s Toys).

The new space is laid back and entirely unpretentious, with vibrant paintings covering most of the wall space, reggae music playing, and a noticeable lack of snobbery and track lighting. (The former is refreshing, though the addition of the latter would better showcase the array of visually captivating work on display.)

Onikoyi said his work has been deeply affected by the people of San Luis Obispo. A benefit of having one’s art constantly on view, he noticed, was an abundance of feedback from viewers.

“I have to give so much thanks to San Luis Obispo. I’m incredibly grateful. They’ve been very supportive. This place has really influenced my painting,” he said.

Perhaps because of the many spirits at work in his art, Onikoyi plans to change the name of his space to Spirits Gallery, he told me, reflecting a far broader range of creative influences,.

In addition to selling original artworks, prints, and cards, the gallery also offers art classes for children 6 to 12 years old (Fridays, 3:30 to 4:30 p.m., $15), beginning and advanced drumming classes ($40 per person per hour), and a drum circle and dance every Saturday from 6 to 9 p.m., to which people of all levels of experience are welcome.

Gallery hours are Tuesday through Sunday from noon to 8 p.m. For more information, call 598-3212, or find Spirits of Africa Gallery on Facebook. Spirits of Africa will be open during Art After Dark on Friday, July 6, from 6 to 9 p.m.

The fifth annual “Goldens in the Park” fundraising event, a benefit for Woods Humane Society and Animal Shelter Adoption Partners (ASAP), takes place at Laguna Lake Park on Sunday, July 8, from noon to 4 p.m. The event is organized by Lenny Jones, founder of the SLO County Golden Retrievers Group. However, all breeds and their owners are welcome. Sponsorships and booth rentals are available by calling Lenny at 489-9000 or e-mailing lennyjones@lennyj.com. Find more details on the event at slogoldenretrievers.com or facebook.com/goldensinthepark. ∆