'If we make it through December'

As the failed expansion attempt by Haggen Food and Pharmacy grocery stores slowly grinds to a halt, some people are losing a place to shop—at least temporarily. Others, however, are losing their jobs.

The Washington-based grocery store chain, which already initiated multiple rounds of layoffs and bargain clearance sales to liquidate its stock, will be closing several stores throughout California this month, including six in San Luis Obispo County.

More than 400 people will be laid off in the county, said Sarah Hayter, business services and labor market specialist for the SLO County Department of Social Services’ workforce development program. 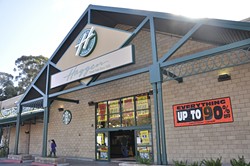 “It’s a great group of employees put in an unfortunate situation,” Hayter said.

The labor market specialist works in collaboration with the Workforce Development Board, America’s Job Center of California (AJCC), and the Employer Advisory Council to host workshops and career fairs for those affected by the recent store closures. The organizations are working with area businesses that may also be looking for experienced recruits.

“As far as any business owners who are looking for employees, this is a great opportunity to bring on some really great staff,” Hayter said. “Some of these people have been working in grocery stores for 30 years.”

The career fairs—which will be on Nov. 12 at the Atascadero Pavilion in Atascadero, and Nov. 17 at the Ramona Gardens Community Center in Grover Beach (both at 11 a.m.)—are put on by the AJCC’s rapid response teams and will be attended by several prospective employers from a variety of industries (see SLOworkforce.com for a list).

“There [are] employers showing up that have jobs, and it’s across all industries,” said Linda Davidson, who is coordinating the workshops for AJCC. “It should be a really great opportunity for people who are motivated and looking to go back to work.”

Both Davidson and Hayter said that several other stores have also closed in recent months, resulting in a total of 500 lost jobs. The rapid response program finds businesses that are closing—either be being contacted by the businesses, by word or mouth, or by media reports—and then works with those businesses to help relocate their employees.

Hayter said that so far this fiscal year—which ends in the summer of 2016—the program has responded to nine closing businesses, Haggen being one. Last year, the program tracked only five business closures during the entire fiscal year.

The businesses that have closed include a distribution center in Paso Robles; two retail stores at the Pismo Beach Premium Outlets mall; Bali’s Yogurt, Fresh and Easy, Crazy Jay’s clothing store, and the Laureate School in SLO; and Girls Restaurant in Arroyo Grande.

In April, Haggen opened six stores in SLO County that they had purchased from Albertsons and Vons (owned by Safeway) in December 2014. As part of a merger between Albertsons and Safeway, the Federal Trade Commission forced the companies to sell several stores per anti-trust rules. In turn, Haggen, which at the time operated 18 stores in Washington and Oregon, purchased an additional 146 stores in five states.

It wasn’t long before Haggen and Albertsons became embroiled in their still-ongoing legal battle. In July, Albertsons sued Haggen for approximately $36 million after accusing Haggen of not paying for some of the inventory it had acquired. Then, in September, Haggen sued Albertsons for $1 billion, accusing them of meddling with inventory during the acquisition.

Haggen also filed for chapter 11 bankruptcy in September, seeking to sell several stores in order to “reorganize around its core profitable stores,” according to a Sept. 8 press release from the company. Since then, several stores, including all those in SLO County, were authorized to be sold.

Haggen previously laid off 125 employees, according to Davidson. She said that those employees—who are members of the United Food and Commercial Workers Union Local 770—were absorbed by other grocery stores in the county.

With additional layoffs, it will be more difficult for those put out of work to be absorbed, because many other stores have already taken on as many new employees as they can.

So far, Haggen has entered into an asset purchase agreement with Smart and Final for three stores, including locations in Paso Robles, Atascadero, and on Johnson Avenue in San Luis Obispo. Haggen also owns stores in Los Osos—which has already closed its doors—in Arroyo Grande, and on Foothill Boulevard in San Luis Obispo.

Davidson said that as long as there is continued interest from people looking for a new job, her organization and its sponsors hope to continue offering support.

“It’s really about a community service,” Davidson said. “It’s about coming together to give these people some opportunities.”