If you build it: Yogi architect Peter Sterios embraces change

It’s 6:30 a.m. on a recent Thursday in San Luis Obispo, still dark, and Peter Sterios is guiding a group of early-rising yogis through their warm-up sequences. I mean, probably. I assume so, anyway. I’m still outside, breathlessly locking up my bike in front of Sterios’ studio, mBODY Yoga & Massage. I’m not a morning person.

But Sterios is gracious, whispering a welcome as I sneak my yellow mat into the only vacant space on the studio floor; the one right in front of the teacher. The room is north-facing, and Sterios’ students orient their mats in the direction of the roll-up glass door. As the sun rises, a small, well-tended garden unveils itself.

The aesthetic of the space—sleek, compact, and intentionally unfinished, with a hint of the industrial warehouse it once was—is entirely Sterios’ design. Before he was an experienced teacher and practitioner of yoga, Sterios studied architecture at Cal Poly. In the early ’90s, in fact, Sterios founded the Yoga Centre, San Luis Obispo’s first yoga studio, in a building across the street from the architectural firm where he worked. His landlord gave him six months of free rent, Sterios says, in exchange for the work he put into renovating the place, but also because he was skeptical about whether a yoga business could survive in San Luis Obispo.

Such concerns are laughable today, with so many businesses in SLO County dedicated to the practice of yoga. Sterios has founded several of them, and as such is frequently credited with bringing yoga to the Central Coast. While such claims are often impossible to verify, Sterios has certainly had a hand in building—often quite literally—the yoga community, both local and national.

The airy studio space that now houses Smiling Dog Yoga was also Sterios’ project, as were the many incarnations of the Yoga Centre. These days, Sterios says, the majority of his contracts come from within the yoga community—he’s even landed one project after a client Google-searched “yoga and architecture” and his name came up.

Sterios sees this intersection as a natural one, and insists that architecture and yoga are equally creative endeavors—both of them hands-on processes in which theory can only take a person so far; in which a student learns by creatively navigating the unique conditions of a building site in the one case, and the fluctuating limitations of the human body in the other. 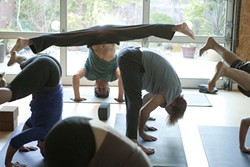 The title of Sterios’ popular yoga DVD, Gravity & Grace, also seems informed by architectural principles. His explanation of the term as it relates to both practices is enlightening:

Sterios relates this concept to the yogic idea of “effortless effort,” or eliminating all excessive muscular force from each asana, or pose.

On the spiritual side of things, too, Sterios sees an architectural connection:

“There’s an inherent spirit in a structure, in a building. Walking into an inspiring space, you feel a certain energy, and I relate that to the spirit of the building touching your own spirit.”

Sterios’ bio is full of little asides that could each be full-time jobs in themselves. In addition to teaching and architecture, he’s also a writer, frequently contributing to Yoga Journal and other publications dedicated to the practice. He’s the founder of Manduka, an eco-yoga products company based in Los Angeles (though he later sold the company, Sterios still does occasional consulting work), and co-founder of karmaNICA, a charitable organization benefiting impoverished children in western Nicaragua. For the past three years, Sterios has also been invited to teach yoga at the White House under the auspices of Michelle Obama’s anti-obesity initiative.

He’s also released a follow-up to his popular Gravity & Grace, filmed at Esalen Institute in Big Sur. When we spoke, he also divulged that he’s working on a coffee table book, Gravity & Grace: Seeds for Creative Yoga.

Like so many, Sterios initially turned to yoga as an antidote for physical ailments. After completing his degree at Cal Poly, Sterios traveled to New Zealand to play rugby. He had already been practicing yoga as means of coping with the physical strain of the sport—“On my rugby team, I was just this vegetarian yoga-guy freak,” he laughs—but his practice deepened when he met Zhander Remete, the Hungarian-born founder of a school of yoga known as Shadow Yoga.

“After two years of rugby, my body was broken. It was at this time that I met this yoga teacher … who basically I studied with for 20 years.”

Sterios became his “groupie” after that, he says, traveling frequently with Remete. After eight years in New Zealand, Sterios left for India to study with Remete’s own teacher. It was after a year in India that he moved back to San Luis Obispo, having undergone a transformation from a self-described “yoga tourist” into a full-fledged yogi.

Eventually, however, his longtime mentor sent him away, telling him he’d learned all he could and instructing him to pursue his own path.

“We live in a day and age where teachers are surviving off of their students. You don’t send away your best student. Rarely. Rarely,” says Sterios. “A lot of what you see in celebrity yoga teachers is that you’re cultivating dependency.”

But this tendency, he explains, runs counter to a central tenet of the practice.

This article has been updated on Thursday, Jan. 23 to correct a typographical error.