That’s what she said when I asked her where the idea for her new exhibit of photographs at Haven Properties in San Luis Obispo, Budding Forms, originated. 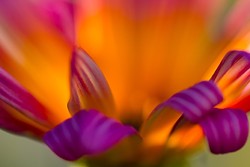 “I guess it has a lot to do with my whole feeling with everything going on in my life,” she commented over the phone.

“I’m in love, and this show is about love. These pictures are my homage to my new home in San Luis Obispo.”

Yes, Ildiko Laszlo fell in love, with her fiancé and her recently adopted Central Coast home. But although her striking exhibit—all up-close, vibrant images of nature—reflects a new era in her life, Laszlo has been behind the camera for a long time.

Ever since she took her first roll of photographs as a young girl, Laszlo’s been documenting her surroundings. Inspired by the works of masters like Ansel Adams and Diane Arbus, she continued exploring this passion throughout college, reinventing herself and her techniques with a tenacity and ambition matched only by her parents and their remarkable lives.

In 1956, Laszlo and her family fled their home country of Hungary during the nationwide revolt against Soviet control. This was far from the only moment of strife to afflict the family. During World War II, her parents both endured the horror of the Holocaust. With help from the Red Cross, her mother hid herself in a Hungarian forest to avoid capture. Her father wasn’t as successful.

By the time the war ended in 1945, he weighed less than 90 pounds and somehow managed to make it through two concentration camps. When the family arrived in the United States, her parents established themselves as successful academics, with the individual freedom to express themselves as Laszlo has done with her photography.

“What they wanted for us really helped me blossom,” she noted. “If I would’ve been burdened by their stories and the pain they went through, that may well have affected me in a negative way. They didn’t do that. They allowed us to benefit from the freedom that was here.”

You can see that liberation in Laszlo’s work. Her photographs—all taken digitally with a 100-millimeter macro lens—exude lush and colorful tones that are rich with life. Images like Light My Fire immediately invite your gaze with sumptuous purples, oranges, and greens. Only by looking a little closer can you even notice that these abstract hues belong to a flower. This is the case for much of Laszlo’s exhibit.

Her photography blurs shape, color, and sensuality. Petals and leaves form lines that look like watercolor brushstrokes, and dew drops sparkle as flashes of light. They are photographs, yes, but their appearance and style evoke the composition and color of paintings. To enhance this effect, Laszlo processes all of her photos as giclée prints on rag watercolor paper to ensure longevity and an enhanced quality.

“I’ve always been one of those people who stops and smells the roses,” she said. “Now I feel like, with the magic of photography, I share the sense I feel. I don’t always have a plan. I kind of let the spirit move me. I collect flowers and leaves, then bring them back home and set up shoots. Some things I shoot outside. … SLO just has so much beautiful, open space.”

In several of the images that comprise Budding Forms, you can see flowers right in the midst of blossoming. They’re opening themselves up and letting light in. You could say much of the same for Laszlo. She’s reinvented herself once again by incorporating the skills of her training, the teachings of her parents, and the promise of a new life full of love.

“You know you can photograph anything that interests you,” she said. “I guess my parents gave it to me—that strong sense of curiosity. I’m always curious about what’s around the bend. It’s not always that it’s so beautiful. I love alleyways and industrial complexes. I’m kind of open and free about what’s gonna lead me to the next thing.”

Jessica Peña is out smelling the roses,  and possibly activating her allergies. Send medication to jpena@newtimesslo.com.