Since she came on board, to coincide with our coverage of the SLO International Film Festival, our staff made a Bill Murray film called There’s Something About Murray, and we created a mocked-up editorial staff photo of us in the submarine from Bill Murray’s film The Life Aquatic with Steve Zissou.

Look, I like Bill Murray as much as the next guy, but Ashley’s fascination borders on the obsessive! She has photos of Bill Murray in her office, she constantly wears a red beanie like the ones from The Life Aquatic, and she even convinced Bill Murray’s brother Ed Murray, who lives in Santa Maria or something, to participate in our little film.

I think she’s been smoking too much of that “hybrid,” you know, the “Kentucky Bluegrass, Featherbed Bent, and Northern California Sensemilla?”

“The amazing stuff about this is that you can play 36 holes on it in the afternoon, take it home, and just get stoned to the bejeezus-belt that night on this stuff,” says Murray as assistant greenskeeper Carl Spackler in Caddyshack.

According to IMDb.com’s Bill Murray biography, “Bill is the fifth of nine children born to Edward and Lucille Murray. He and most of his siblings worked as caddies, which paid his tuition to Loyola Academy, a Jesuit school. He played sports and did some acting while in that school, but in his words, mostly ‘screwed off.’ He enrolled at Regis College in Denver to study pre-med but dropped out after being arrested for marijuana possession.”

“If I could only have one guy, if I couldn’t have my whole harem, I would have Bill Murray,” I overhear Ashley saying to Arts Editor Anna Weltner. Bill Murray is about to turn 61. Ashley is 27. Yes, this is sort of weird, maybe even vaguely creepy. 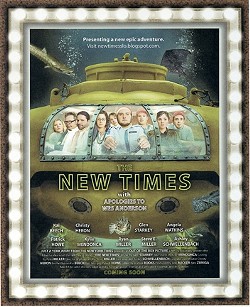 Murray’s been married twice (never to Ashley Schwellenbach, sigh); produced six children; has a trademark deadpan expression; accidentally broke Robert De Niro’s nose during the filming of Mad Dog and Glory; owns the Riverdogs, a minor league baseball team in Charleston, N.C.; was bitten by the groundhog twice during the filming of Groundhog Day; and doesn’t have an agent or entourage. His sister is a Dominican nun, he lists Oklahoma! as his favorite musical, and he appeared in Zombieland as a favor to Woody Harrelson.

Why, you may be wondering, am I telling you all this? Because Ashley is holding a Bill Murray birthday party and you’re invited! Seriously! On Wednesday, Sept. 21, starting at 7 p.m., Ashley and her minions will be at the Olde Port dog beach, the one with the fire pits, just north of Avila.

“Bill Murray’s turning 61, and though he probably won’t be with us in person to celebrate (unless someone has his phone number?), we’d still like to get together to celebrate the man, the legend,” Ashley wrote in her Facebook invite. “So here’s how it’s going to go down: the bonfire starts at 7 p.m. Please wear formal attire and a red beanie if you have one. At 8 we toast Bill, take a shot, and dash into the water.”

The festivities continue after that. I will be on hand to record the mayhem, but since we go to press on Wednesday afternoons, you won’t be reading about it until the Thursday, Sept. 29, issue.

This should be a real spectacle, people, maybe the kind Bill Murray was talking about when he said this: “If you walk up to some random person on the street, grab them by the shoulder, and say ‘Did you just see what I saw?!’ … you’ll find that no one wants to talk to you.”