Is it just me, or does it seem like Jackson Browne has lived a charmed life? He had relationships with three models including model/actress Daryl Hannah right around her Splash/The Pope of Greenwich Village/The Clan of the Cave Bear days. He was an outspoken environmental activist long before it became popular. He happily plays charity events because he’s a nice, caring dude. He’s been inducted into the Rock and Roll Hall of Fame. And then there’s the music … . 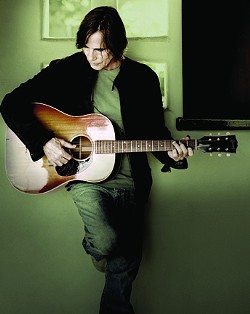 “Doctor My Eyes,” “Rock Me On the Water,” “Redneck Friend,” “Take It Easy,” “Walking Slow,” “Fountain of Sorrow,” “Here Come Those Tears Again,” “The Pretender,” “Running on Empty,” “The Load Out/Stay,” “You Love the Thunder,” “Boulevard,” “That Girl Could Sing,” “Hold On Hold Out,” “Somebody’s Baby,” “Lawyers in Love,” “Tender is the Night,” “For a Rocker,” “You’re a Friend of Mine,” “For America,” “In the Shape of a Heart,” “Lives in the Balance,” and “I’m Alive” are just a smattering of his famous and universally lauded songs.

On Monday, Feb. 4, Otter Productions is bringing the iconic performer to the Performing Arts Center on the Cal Poly campus for an intimate acoustic concert that will find him playing guitar and piano and singing songs from his long and storied career.

(Insert horns, like in a castle with tapestries and stuff, calling attention to a royal decree! Da-dun-dun-da!) “Thursday, Jan. 31 shall be set aside for attending Don Lampson’s Mid Winter Musicale, with The Vigilante String Alliance, at 7:30 p.m. in the Steynberg Gallery of San Luis Obispo.” 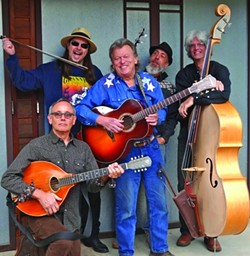 Yes, that’s the sort of e-mails I get from Santa Margarita troubadour, raconteur, bon vivant, and crack shot Don Lampson, who will join forces with Bob Liepman, Eric Brittain, “BanjerDan” Mazer, and Charlie Kleemann in “a show not to be missed!”

Their new outfit, the Vigilante String Alliance, will no doubt feature plenty of picking, grinning, and musical high jinx! The cover is $10, and Steynberg has a nice selection of barley pops and vino. As Don would say, “Haw, haw, haw!”

Next week, SLO Brew’s got a couple shows that are definitely on my radar—Nashville Pussy on Thursday, Feb. 7, and Dr. John on Friday, Feb. 8—but before we get there, the Brew has three worthy contenders! 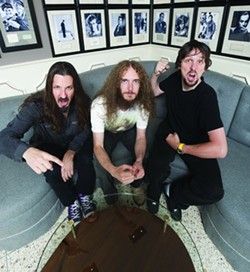 On Thursday, Jan. 31, instrumental rock fusion trio The Aristocrats plan to blow the roof of the joint (7:30 p.m.; all ages; $20) with local prog rock demigods The Travis Larson Band opening. If you’re into ripping guitar work, these two acts will flay the skin from your body.

“We’ve all been on the covers of our respective instrument magazines (Guitar Player, Bass Player, Modern Drummer), our debut CD The Aristocrats has sold nearly 10,000 units on our own indie label, and we just released a double-live CD/DVD called Boing, We’ll Do It Live! We just did a six-week tour of Europe, including a gig at the prestigious Frankfurt Jazz Festival, and we’ve also hit the eastern and central U.S., as well as Japan, Korea and Russia, in the past 18 months alone,” Beller said.

On Saturday, Feb. 2, High Voltage—a tribute to AC/DC returns to the club with a new vocalist (7:30 p.m.; 21-and-older; $10). I’m not sure how their new vocalist will measure up to former vocalist Kelly Atwell, who was freakin’ awesome! But Kelly is now singing with the Mean Gene band, which is good news for them.

“Todd Wynn is our new singer,” said drummer Ray Rocha. “He’s from L.A., and he’s great. I scouted bands and interviewed singers from Hollywood and L.A. (where I’m from), and came across Todd singing in another tribute act doing AC/DC, called LAC/DC. He rocked it and sounded great. What stands out is his attention to detail on the nuances of both Brian Johnson and Bon Scott. We’re glad to have him.”

High Voltage delivers all the hits and totally gets into the spirit of AC/DC, in large part thanks to guitarist Josh Blodgett, aka Jangus, who wears the schoolboy outfit and isn’t afraid to leap off the stage and take his ripping guitar work out into the audience.

This night should be extra fun since it’s Rocha’s 35th birthday party to boot. “I know. I just look like hell,” Rocha joked. “The cover is 10 measly bucks, and we’re gonna kick some major ass.”

Hollywood Boneyard, an ’80s hair metal revue, opens the show, and don’t be surprised if some of the players look familiar—it’s a side project for High Voltage members Josh Blodgett on lead vocals, Alex Lacerda on bass, and Ray Rocha on drums. Expect spandex, makeup, and big old piles of teased hair. Chris Westfall joins them on lead guitar and Greg Vorboril on keyboards.

“This band is fun,” Rocha said. “Our bio states we met at an AA meeting and soon after, while drinking at a bar, we decided to form the band. Ha ha. Read it; it’s some
funny shit.”

Soulful ex-boxer-turned-troubadour Paul Thorn returns to the club on Tuesday, Feb. 5 (7:30 p.m.; 21-and-older; $22 presale or $25 at the door), with Tommy Castro & The Pain Killers opening the show. Thorn broke new ground and won over new fans with his excellent 2010 release Pimps and Preachers, and as a follow-up, he decided to release a collection of cover songs called What the Hell is Goin’ On?

Americana fans will recognize some names such as Buddy Miller and Ray Wylie Hubbard and maybe some of the lesser-knowns like Foy Vance and Wild Bill Emerson. He covers the Buckingham/Nicks tune “Don’t Let Me Down Again.”

“I would hear them in the tour van or I’d be at a festival and see someone perform them live,” Thorn explains in press materials, “and I’d say ‘That’s a great song, I wish I had written it!’”

Thorn calls everyone he covered true artists: “They don’t just write songs in an effort to become popular or follow trends,” he explained. “At the risk of sounding corny, they write with their hearts. None of these songs are cookie-cutter tunes like you hear on the radio today. They all have real depth, which is very appealing to me.”

This should be a great show, and with Tommy Castro opening, even better!

Jody Mulgrew and the Skeleton Crew headline the SLO Down Pub on Thursday, Jan. 31 (6:30 p.m.; all ages; pass the hat), and I have to say, he’s a performer I just don’t get tired of. His last album, Rocket Ship, won Best Album in the 2011 New Times Music Awards, his songs appear regularly on The Krush 92.5FM, and he’s the sweetest guy you can imagine. Matthew White of the Ballistic Cats will also perform a short set.

Jahny Wallz returns to Frog and Peach on Thursday, Jan. 31 (8 to 11 p.m.; 21-and-older). Also known as Ivan Paredes, the singer-songwriter is a self-taught guitarist and percussionist with a unique style. He recently released Life Lessons, a mix tape featuring all original content with eclectic collaborations with Wil Dog of Ozomatli, George “Funky” Brown of the legendary R&B group Kool and the Gang, King Darius, George Ortiz from the Poncho Sanchez Orchestra, and Gio Vedurzco.

If you were hoping to see all female pop folk quartet Blame Sally at Castoro Cellars on Saturday, Feb. 2, you’re out of luck—that SLOfolks show is sold-out. The good news is there are tickets left for their Friday, Feb. 1, show at United Church of Christ in SLO (11245 Los Osos Valley Rd., 544-1373; 7 p.m.; $20). This is an amazing group of performers—everyone a soloist in her own right—melding their talents together for something truly special. If you like gorgeous songs, four-part vocal harmonies, and sparkling musicianship, you’re going to love these ladies! Sonnie Brown will interview Blame Sally on KCBX 90.1FM, Saturday, Feb. 2, on her show Song Town after 2:30 p.m.

The SLO Children’s Museum will be filled with the sounds of music on Saturday, Feb. 2, when Teresa Gasca-Burk presents Birdie: Music For the Kid in Everyone! during two performances: at 11 a.m. and 1:30 p.m. “We will be performing songs from our three CDs, including our new recording, The Kitchen Pan Band,” said Gasca-Burk. “The CD was recorded and co-produced with Santa Maria’s Terry Lawless, who as you may know, works with U2 and is currently on the road with Pink! Our music is fun, interactive, and for the whole family.”

At the Performing Arts Center, concertmistress Pam Dassenko joins the SLO Symphony in its presentation of Rimsky-Korsakov’s exotic re-telling of 1,001 Arabian Nights, Scheherazade, on Saturday, Feb. 2 (8 p.m.; all ages; $20 to $75 tickets by calling 756-4849). Mozart’s romantic Symphony No. 40 will also be performed. If you can’t afford tickets, you can attend a free dress rehearsal at 1 p.m.

D’Anbino Vineyards & Cellars is host to the Central Coast’s own favorite contemporary jazz band, ZZAH, on Saturday, Feb. 2 (8 p.m.; 21-and-older; $10; call 227-6800 for reservations). The band features “melodic West Coast sensibilities with an East Coast approach to soloing,” and they’ve appeared with great artists such as George Benson, Billie Preston, Spyro Gyra, and others.

L.A.-based jazz a cappella quintet Down 4 the Count plays Saturday, Feb. 2, at Steynberg Gallery (8 p.m.; call 547-0278 for more info). “They perform clever, innovative arrangements with a sound that hearkens unto ensembles of yesteryear like the Hi-Los, the Four Freshmen, and Lambert, Hendricks, and Ross,” according to press materials. “Although the group is based in Los Angeles, four of the five members have strong ties to San Luis Obispo and fond memories of this beautiful town: Bass Vincent Johnson (also a current member of the Four Freshmen) attended San Luis Obispo High School; alto Christine Tavares graduated with a music degree from Cal Poly; and soprano Colleen Keene attended Cuesta College for many years before moving to Los Angeles.”

Feeling stressed out? Having trouble sleeping? Want to go to the beach but you’re stuck at the office? Have I got the perfect ticket for you! The Avila Beach Sea Life Center recently released a fundraising CD, Sounds of the Sea: For Relaxation.

The soothing sound of crashing waves, the cry of the gulls, the horns of a passing ship—seriously, you’ll feel like you’re at the beach!

The Avila Beach Sea Life Center is a nonprofit organization “committed to cultivating a community dedicated to ocean stewardship through education, engagement, and action.”

Learn more by visiting their website, sealifecenter.org, or call them at 595-7280 (they’ll mail the CD to you!). You can buy the $15 disc in person at the center, the Avila Bay Club, or Central Coast Kayaks. ∆