I’m walking to McCarthy’s front door, and as I look down there’s water everywhere.

“Hey, Steve,” I say to doorman Steve Damasco. “Did somebody ralph?”

I walk in and see Colin Wenzl behind the bar and order a round of drinks for New Times photog Steve Miller and me. Thank you, petty cash!

“It’s been pretty easy,” says Colin. “It’s been all Guinness and Jameson. I didn’t even have to make my first Bloody Mary until a few minutes ago.”

“No! I’ve been in training,” says Chad. “You know how triathletes condition themselves before a big race by swimming and biking and running? Well, I’ve been training by drinking! I’m in top shape right now. I think I can win the gold.”

Just then Dora Mountain rushes up with her friend Victoria Wals to show me the special pub-crawl map they made. Dora did all the icons.

“I’m talented,” she says, admitting she arrived at 6 a.m. but wasn’t the first in line. Just then I notice a series of green hash marks on Dora’s and Victoria’s hands—7 and 10(!) respectively—there to remind them of how many drinks they’ve had.

Then Elizabeth Coughlin, one of the models from the McCarthy’s calendar, says hi: “I wanted to get here earlier but I was at the hospital. They just drew five vials of blood and I haven’t eaten anything,” she explains before taking a long draw on her drink.

DeAnn Troutner is set-up in the corner of the patio selling green beer, Jameson, and “Irish” burritos—corned beef, cabbage, potatoes.

“I was standing back here thinking I was hungry and how I’d probably get a break around noon, and then I thought, ‘Hey, stupid, you have a whole bag of burritos.’ I ate one and they’re great.”

As I ponder the possibilities of corned beef and cabbage burritos, I see a guy sandwiched between two friends being guided out of the bar. He. Looks. Hammered.

As they leave, the crowd in the bar erupts in spontaneous applause—another wounded soldier carried off the battlefield. Heroes, every last one of them.

Then my pal David Vienna arrives.

“I had no idea this was such a big holiday in SLO. I just passed a group of homeless people and even they were wearing green! ‘Got any change?’ they asked, all in green. I guess when you’re homeless, the last thing you want is to get pinched.”

Cops! Miller and I counted five of them on the way to the bar, but there’s two—Lt. Tolley and Sgt. Hixenbaugh—standing on the sidewalk near the parking lot. Miller waves them over.

Tolley and Hixenbaugh look at each other as if to confer, and then Tolley says, “Two.”

“So I just saw some drunk guy get walked out of here by two friends. Would you arrest him?”

“We want everyone to have a good time but to be safe,” adds Hixenbaugh. “We just want to be sure everyone gets home safe.”

Wow, our cops are so lifelike and human!

Then a girl walks up and asks DeAnn about her burritos.

“You should try one,” says David Vienna. “I had one, and it was like blowing a leprechaun.”

DeAnn had special glasses on that say “The Drink’s” over one eye, “On Me,” over the other eye.

“The drink’s on you?” I ask, pantomiming throwing my drink on her.

“Watch it,” she says. “I could hose you down with this beer tap.” 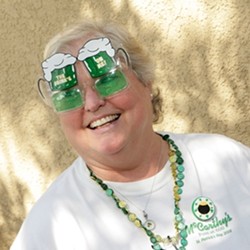 Then Rodger Maggio, SLO’s Fire Marshall comes over. He’s got one of those little counter things on his finger and he informs me that McCarthy’s is at capacity. He’s got three guys out checking capacity. Safety first!

“Sure, at social occasions,” he admits.

“So, are you jealous?” I ask, swilling my tumbler of Jameson.

“When the bars close.”