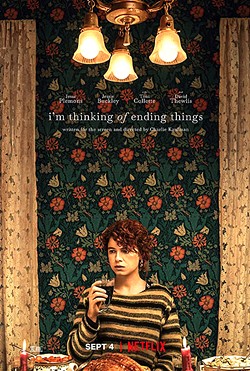 In the middle of a mild snowstorm, a young woman (Jessie Buckley) narrates the long drive with her boyfriend, Jake (Jesse Plemons), to visit his parents in Oklahoma. But there's something off about the trip. Between the woman's drifting thoughts of the seemingly new relationship and questioning her suitor, her mind always drifts into "thinking of ending things." The outing becomes eerier when the couple finally makes it to Jake's parents' house where the night seems to go on forever as she watches his parents age before her eyes.

This adaptation of the novel with the same name has a strange and uncomfortable atmosphere that director and writer Charlie Kaufman often creates—think Eternal Sunshine of the Spotless Mind and Being John Malkovich. Kaufman did a fascinating job of crafting a world that appears to center on the subconscious mind of the young woman, and yet we know nothing about her. But we know everything about Jake.

The film is dark and questions reality, and you can't help but be sucked into this trip that heads toward an end that isn't clear to the audience. It's worth a watch or two to truly wrap your head around the anxiety-riddled evening. (134 min.) Δ