Imagine, if you will

In April, theater students Emma Duncan and Corbin Went exchanged the relentless fog of London for the slightly less legendary Cambrian haze. London’s loss is our gain—temporarily, at least—as the pair has committed the summer to spinning ghost stories at the Pewter Plough Playhouse. One ghost story, really, but you’ll need no others after hearing the chilling tale of The Woman in Black. 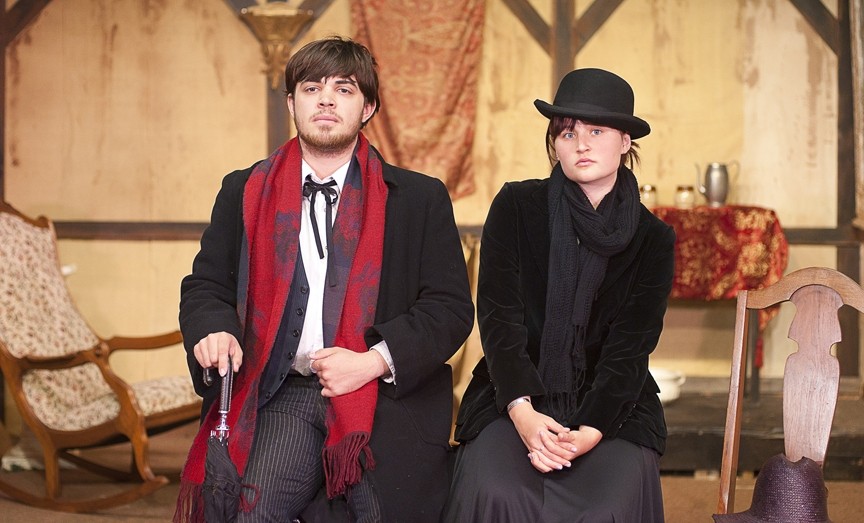 It would be easy to dismiss the duo as kids playing at being actors while on summer break. They’re 21 and 20, respectively, engaged to be married next June (after Duncan graduates from Sarah Lawrence College), local kids made good, and it’s the responsibility of mature adults to support and encourage their fledgling talent. But this would be a very silly attitude to take. In reality, you’ll find no finer acting talent locally, regardless of age. Three years ago, at the age of 17, Duncan carried an 80-minute one-woman show, The Belle of Amherst. She repeated the coup the following year.

Now, with Went by her side; her father, Charles Duncan, directing her; and a year of training at the prestigious British American Drama Academy under her belt, there was no question that Duncan would take the hamlet’s quaint little stage by storm. In the role of the actor—really two roles, as the actor also plays Arthur Kipps throughout this happily metanarrative production—Duncan easily masters nuances like accents, which tend to trip up many local theatrics. Anyone who’d seen her in The Belle would expect no less.

So it’s Went, playing seven different roles ranging broadly in age and accent, who’s the pleasing surprise. As is the show itself, which could have been written with the Pewter Plough Playhouse in mind. It’s set in a small Victorian theater, which the Cambrian playhouse requires little to no alteration to evoke, and requires a small cast, both a blessing and requirement in a small town where productions are sometimes cancelled because there aren’t enough performers. A scene in which Duncan, playing the actor pretending to be Kipps—bemused, yet?—drawlingly dismisses “country folk” as “unsophisticated” and “slow-witted” takes on new comic heights when acted before an audience of “country folk.” As originally performed in London, this scene must have
been lacking the potential for people to laugh
at themselves.

The show opens with Went, as Kipps, reading as if in a race to get to the end of the script. This deliberately awful reading is interrupted by the actor—Duncan—who implores him to “have sympathy for your audience.” It’s a very postmodern moment in a postmodern play, the actor grooming Kipps, who has no desire to perform but feels compelled to tell his sad story. The actor speaks feelingly about the responsibilities and challenges of the stage.

“Performing is an art acquired with tears and time,” the actor insists. And somehow, watching Kipps progress and laughing at the actor’s perfectly timed digs at his skill—“Miss, I am not an actor,” “Sir, I know”—reminds the audience of the value of a skilled performer. It’s a compliment the performers pay themselves, and it’s well deserved. As Kipps’ ghost story progresses, it will be told in a number of ways. Kipps works through part of it on his own, haltingly, while the actor coaches him. Then, more and more, the actor plays the role of Kipps, while the real Kipps (Went) either narrates or plays a handful of supporting roles. Occasionally, the actor tears them from the linear narrative thread, praising Kipps for his increased confidence.

Slowly, as the audience gets stuffed into a dizzying rabbit hole of actors swapping roles, merging from present to past to present again, the story becomes less about the hows and whys of telling a story and more about the ghost, the female specter clad in black. The audience has the uncomfortable task of questioning whether this ghost will pass muster, will inspire goose bumps and gasps of fear.

She does. And compellingly enough that I was grateful not to be sitting next to the aisle. The Eel Marsh house, isolated from the residents of Crythin Gifford and beset by lonely specters, is not difficult to imagine. The set is simple and sparse, leaving the brunt of the legwork to Duncan and Went, their accents and mannerisms. Playing make-believe is an effective and fun story-telling tool, it turns out, provided the audience is in on the game from the beginning.

“Imagine, if you will,” Kipps pleads, and the audience willingly complies. But the actor, better educated about the tools at a performer’s disposal, will have to lead the way. She drags a trunk to center stage and instructs Kipps to pretend it is a coach. In future scenes, the pair will bounce up and down on the trunk, in imitation of a coach’s rhythmic jostling.

Then there are the recorded sounds she has coordinated to help the reluctant Kipps get on with his tale. We are to understand, from his reaction, that this is cutting-edge technology, which is funny because most local theater companies don’t make very good use of this resource. Typically, when used, it’s treated the way filmmakers do 3-D technology: splashed all over the place unnecessarily. And it tends to sound canned, like the outdated voices on Disneyland’s Pirates of the Caribbean ride. The Woman in Black suffers a few of these moments, relying on recorded sound simply for the sake of recorded sound, and it imposes on the quality of the acting and story. In other instances, the technology helps carry the production forward.

For the most part, though, the production has a clean feel to it that is often lacking on local stages. There’s no need to ignore the actor whose accent falters or disappears altogether, nor to hastily dismiss blaring faults out of kindness. It’s a luxury watching two actors with such command of their craft. And the technical crew made it all seamless and easy to follow, despite a demanding workload of lighting and sound cues, more than 100 apiece in the course of an hour and a half.

As for the big reveal, the answers to the questions any audience must ask throughout the course of a ghost story—Is Kipps making a great deal of nothing? Is he simply a coward? Or is there more to come?—should not be delivered in print. The ending is well done, all of Kipps’ melancholy verging on hysteria is justified. We can go home, shutter our windows, and dream fearfully of that woman.

And then, thankfully, a twist.

Managing Editor Ashley Schwellenbach is right behind you! Contact her at aschwellenbach@newtimesslo.com.