Banners: Prints & Patterns exhibit will be on display at the SLO Museum of Art through Jan. 27 and is put on by the Central Coast Printmakers Group. An opening reception will be held Jan. 4 from 6 to 9 p.m. in conjunction with Art After Dark. Visit sloma.org for more information.

Patterns. They're in everything from flowers in our backyards to the wallpaper on our bathroom walls and the intricate tile work in our kitchens.

Joyce Bauerle, a member of the Central Coast Printmakers Group, decided to capitalize on the group's shared interest in patterns by hosting a workshop on turning a series of repeating prints into 6-foot-long banners, which served as the inspiration for the group's show currently on display at the San Luis Obispo Museum of Art, the Banners: Prints & Patterns exhibit. 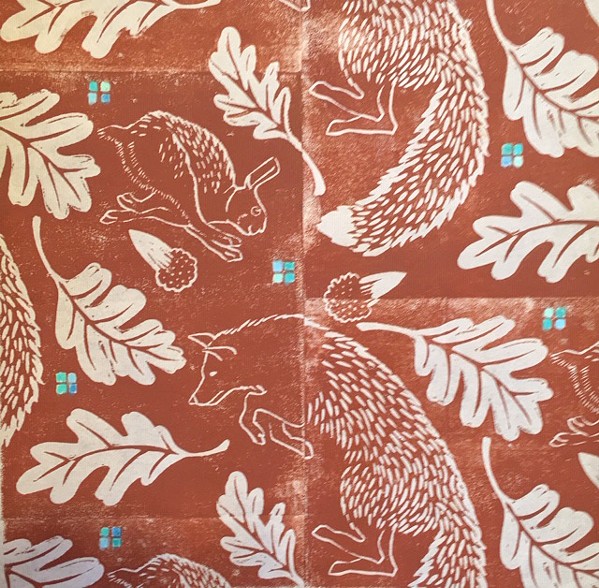 Atascadero artist Beth Kilimnik fell in love with printmaking in college after working with clay, as well as sculpture and weaving. 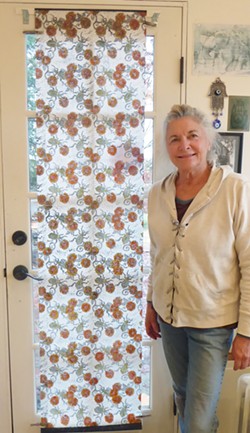 "It was different from all the other types of art I was doing," Kilimnik said. "All the new things I learned about etching, engraving, woodcut—it was just an opening to a whole new world."

Years later, Kilimnik is still learning new things about her craft. Her piece, Fiery Searcher Beetle, was done as a linocut, a technique that Kilimnik recently learned at Bauerle's workshop. This process allowed artists to create large, 6-foot-long banners by hand.

"I have an etching press so your prints have to fit inside your press," Kilimnik said. "[The linocut] was pushing us out of those limitations. Those were all hand pressed. There's no way that could fit through a press."

Taking her inspiration from an insect, Kilimnik stamped and pressed her design in black and then hand-colored the beetles in with green and orange.

"I hope people would like it enough that they would search out that type of work," Kilimnik said. "I think people will come away with an amazing variety of things that can be printed that way."

"I just love animals so I wanted to do something with a fox," Davie said. "The fox isn't going after the rabbit; they're just side by side. There isn't any sort of impending doom."

Aside from appreciating a bit of whimsy, Davie hopes that the banners will speak to viewers on a deeper level.

"I've been thinking about patterns in that human beings have a propensity for finding patterns," Davie said. "I hope people will not only be delighted, but think about pattern and why we're so drawn to it." Δ

Arts writer Ryah Cooley is paying attention to the fine print. Contact her at rcooley@newtimesslo.com.