In The Healing, Kristen Black chronicles her son's drug addiction and death, and her effort to heal herself 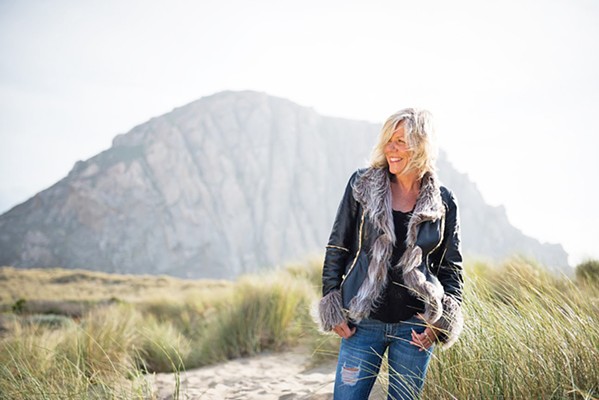 Longtime SLO resident Kristen Black was a pretty hot ticket around these parts, constantly playing gigs and recording great music, but a divorce and the death of one of her twin boys were two blows that would knock anyone off their feet.

She's now in Nashville in a new relationship with Jeffrey Perkins, the longtime drummer for the Paul Thorn Band, and she recently released The Healing, a deeply personal nine-song album she calls "a tribute to my son Anders Meisenheimer." Perkins co-wrote a few tracks and plays—along with other Thorn band members and Nashville stalwarts—on the album.

"Anders was a brilliant, creative, loving, handsome, and talented man," Black wrote in the album's liner notes. "Anders died of an accidental overdose on March 5, 2019, at the age of 22. This album follows his addiction."

The record opens with hard-hitting, punk-edged "Hurricane." Think Pat Benatar and you'll be on the right track. Black mixes drug addiction metaphors, but it's really about her son's emotional addiction to his middle school girlfriend: "No sleep, you're to blame/ You're the drug, in my veins/ Get me soaked in your pouring rain/ Let your love hit me like a hurricane."

Black moves on to "Spencer's Shed," a country-fried bluegrass number in which she speculates naïvely what her then-high schooler was doing with his friends: "In Spencer's Shed/ Are they praying to the light/ In Spencer's Shed/ Solving world peace tonight/ Are they helping feed the homeless by baking banana bread/ That's what goes on in Spencer's Shed—in my head// After two short hours, those teens come on home/ Eyes all red, and they're laughing up a storm/ They stuff their mouths even though they've been well fed/ What went on in Spencer's Shed?" The song ends with the sound of someone taking a bong hit.

The album turns darker as Anders' addiction grows with the slow burning rocker "Pass it to Me": "It's been a tough day, need to look the other way/ A heavy pour will numb me to the core you see/ It's what I need/ Been up all night, now I'm blinded by the light/ Need to shut it all down before that next go round for me/ I need some sleep/ Give me that little push to set my mind free ... Pass it to me."

The smoky, psychedelic "One Love Down" depicts the insidious way drug addiction grinds users down: "The price you paid, for the trips you made/ Was it worth the cost, of one love lost?/ Behind your smile was complete denial/ Of all those dirty needles, seen by so many people."

The folk ballad "Perfect Life" seems to be about Anders' guilt over his addiction. In her liner notes, Black writes, "He admitted he wanted to get clean. But sadly, that did not happen." She sings, "Everything's wrong in my perfect life/ I let you down again/ Everything's wrong in my quiet house/ I let you down again." It's a heartbreaker. It can also be interpreted as Black's own guilt for not being able to turn Anders around.

The bouncing pop rock track "Again" moves from guilt to confession, as Black imagines how her son feels about their relationship: "Fell off the wagon, ran off the rails/ I broke that promise that said, I wouldn't fail/ Now you're looking through those disappointed eyes/ Thinking my mouth spills—nothing but lies."

"Morpheus, the god of dreams, is depicted in the song 'Arms of Morpheus' as a metaphor for the sensations heroin gives its users," Black writes in the liner notes. The song is a gauzy, swirling, languid ballad: "I've got so many ghosts, Morpheus/ Far too many ghosts/ And they're knocking on the walls of this old house/ But none of them worse than the girl with the morphine high." It's about the attractive escape and warm envelopment of a deep dive into a drug-induced haze.

Black describes "You're Finally Free" as "the heartbreaking end to a mother's heart," and if you haven't already wept at the songs, this tender, elegiac ballad will have you blubbering: "As you're flying through those clouds/ Hear me screaming out loud/ That I know and believe—You're finally free/ The light that shined within your heart/ Led so many strangers out of the dark/ But those shadows that called upon your soul/ Tightened their grip, did not let go."

The final track on the album, "egxdd," is Anders playing a wholly improvised piano solo he recorded on his cellphone, which Black wrote, "perfectly illustrates the darkness and light that bounced within him."

The recording is a beautiful tribute to a beautiful kid who turned into a kind, creative, but troubled young man. The artwork on the packaging is Anders'.

As Black wrote to me in an email, "Thank you so much for writing the review. I truly appreciate it for so many reasons! One, as a tribute to Anders. Two, because the U.S. has had so many teens or young adults suffer and/or lose their battles with addiction over the recent years—it is time to bring this taboo subject into the spotlight. As I am sure you know, the opioid epidemic is as prevalent in affluent areas as it is in low-income areas. It is time to treat this epidemic compassionately, not scornfully." 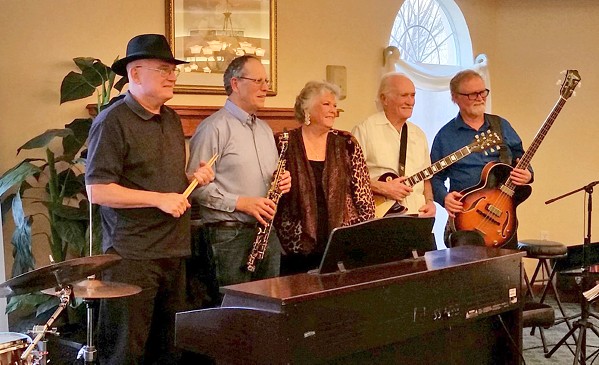 The Basin Street Regulars have another terrific streaming show cooked up for you this Sunday, Dec. 20 (2 p.m. on facebook.com/BasinStreetRegulars and youtube.com/user/BasinStreetRegulars. Donations are encouraged at paypal.me/BasinStreetRegulars). This Christmas Show features the terrific a cappella trio The Jingle Belles, who will remind you of The Andrews Sisters, as well as the Amigos Swing and Jazz Band, playing '30s and '40s swing. Move the coffee table out of the way—you're going to want to dance! 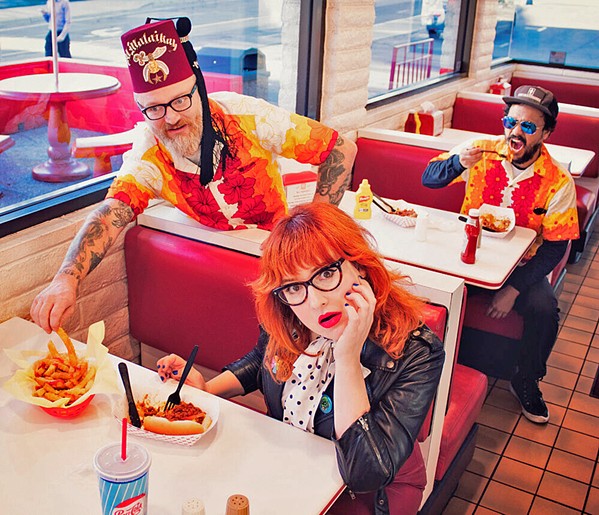 Hayley & the Crushers drop their new "cassingle" "Church of Flag" on Sunday, Dec. 20, which they say is "dedicated to the elder rockers who never forgot the power of three chords cranked loud ... an homage to growing old and staying punk." Hayley sings side A, and "for a fun bit of friendly rivalry, Dr. Cain sings side B," she said. Hear Hayley's A side and preorder a T-shirt and two-song cassette on their Bandcamp page (hayleyandthecrushers.bandcamp.com), which will be released in January. 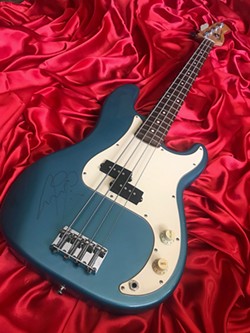 Sting and The Rock

"Since we didn't get to do our annual community radio fundraiser this year, we're giving away a Fender P-Bass signed by Sting," explained The Rock 97.3/107.9FM founder and on-air talent Hal Abrams. "Contestants can register by making a donation of any amount, as many times as they wish to register. The drawing is Dec. 31, just shy of midnight. We really need help making up for deficits this year and keeping community radio on the air." Visit esterobayradio.org, and give early and often! Keep this community gem on the air! Δ