Catch a Central Coast Comedy Theater
improv show every Saturday at 8 p.m. at
Kreuzberg Coffee Co. in SLO. The troupe's
last improv battle-style show will be Sept. 9
at 8 p.m. The cost is $5 per person. Wanna
get funny? Improv classes are now available
in Morro Bay and Paso Robles. Visit
centralcoastcomedytheater.com for more information.

The conversation and beer are flowing and the house lights are on in the back room of Kreuzberg Coffee Co. in downtown San Luis Obispo as the packed room roars with laughter on Saturday, Sept. 2. This isn't your typical stuffy show, cellphones aren't tucked away and silenced but are busy capturing one witty on-the-spot joke after another as the ensemble members of Central Coast Comedy Theater think on their feet through various improv games at their weekly show. 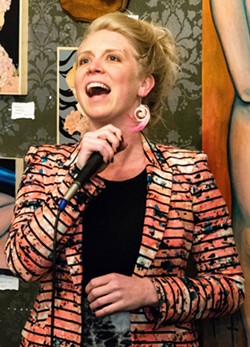 I'm sipping a cold North Coast Saison as Sabrina Pratt, the founder of the comedy theater, introduces the improv teams for the evening. Tonight, it's Your Mom against the Edwardian Buttholes with hot rollers and snacks and tutus and blond wigs, respectively. In celebration of their one-year anniversary, the group is turning their regular show into a series of improv battles for a few weeks, with the applause, cheers, and screams from the audience determining how many points each team scores.

Pratt, a Second City alumnus and drama teacher at Atascadero High School, moved to SLO County a few years ago to be closer to family. She started off last year teaching improv classes at Ignite Movement Studio and hosting shows at Libertine in Morro Bay.

"I just felt like something was missing and it was this thing I'd been doing for 15 years," said Pratt, who sat down to chat with me a few weeks before.

She also explained that improv isn't necessarily about being naturally funny, that's why you take classes. Instead her focus is on saying, "Yes and—" getting out of your own way, and being present. 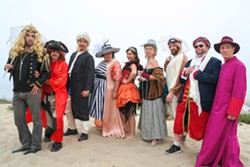 "I like comedy because I like people coming in and taking a break from who they are," Pratt said. "Come in, take a little vacation, relax."

That's exactly what's happening tonight as audience members yell out suggestions for everything from names to non-geographical locations as the ensemble members gleefully try to best each other by jumping from rhyming to crafting personalities and scenes on the spot. Unlike a stand-up comedy show, there's little risk of audience members getting heckled or roasted here. But those looking to do more than just watch now have plenty of opportunities. While Pratt started out with classes just in Morro Bay, she now also offers improv classes at the Earthtones Gift Store in Paso Robles and is looking to expand to offer a youth and teen class as well as improv classes in SLO and South County. There's even talk of Central Coast Comedy Theater hosting a sketch comedy festival in SLO in January. Long-term, Pratt envisions having a dedicated space in town for a comedy club. 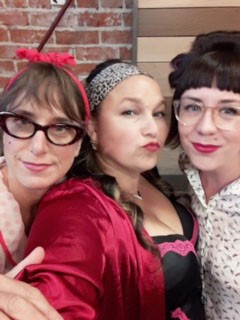 "We don't have anything like that," Pratt said. "I know SLO would welcome it and use it. [Improv] is the place to get real." Δ

Ryah Cooley is laughing out loud at rcooley@newtimesslo.com.