In the spirit of Christmas Carols past

If you hear music, and you’ve done a ballet to it enough times, the steps still come back to you, just automatically,” said veteran ballet dancer Gilbert Reed. “I still react to ballets that I did 50 years ago.”

It’s been eight years since the now-defunct Gilbert Reed Ballet graced the stages of the Central Coast with what became its trademark production, Charles Dickens’ A Christmas Carol. Much has happened in the meantime. The ballet’s little Cratchit children grew up and went to college. Longtime Christmas Carol dancer Theresa Slobodnik started her own company, Ballet Theatre San Luis Obispo. And this year, some of those former Cratchit children have returned as adults, helping out a new crop of little Cratchits, in whose eyes perhaps they see a twinkle of their former selves.

Gilbert Reed himself, who choreographed this production, shares the role of director with Slobodnik, an addition which, according to those involved, has lent great power to the performance.

“He’s a genius,” said Slobodnik, calling him “a master of the craft.”

After his 60 years of practicing ballet, one would certainly hope so. (“I guess I have a reputation or something,” Reed said in a phone interview.) While being directed by a ballet master could easily be intimidating for a young dancer, Reed’s critical eye is offset by an approachable manner. 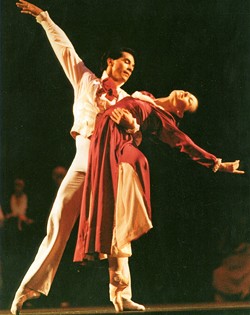 “They’re very sweet and fun, and they really react very well,” he said of this year’s cast. Anything said during rehearsal is for the improvement of the piece, Reed explained. “We’re not giving people corrections, and we’re not attacking them. I never attacked a dancer in my life! I’m trying to get them to do something better, because it’s about them and the audience. If you’re in the profession, you always can see the mistakes more than anything else.”

And while Reed had only the best things to say of his cast in our telephone interview, it’s unlikely they’ll hear such things in the studio, according to Slobodnik. In rehearsal, she said, the biggest compliment he’ll give is this: “It’s really coming along.” That, to the dancers' is the highest praise.

A strange sight in tights and dainty-looking ballet slippers, hair shoved under a beanie, tattoos peeking from a grungy cutoff tee, Ryan Beck would be taken for a madman on the streets of downtown San Luis Obispo. But a couple of stories above those streets, twirling across Dance Obispo’s slick floor, he’s an artist at work.

“I’m very impressed with how they’re coming along,” he said. “She especially, as a young dancer.”

The use of literary terms to describe dance, and dance to describe literature, is a theme intrinsic to Ballet Theatre. Slobodnik referred to the “storytelling” of the dancer’s movements, and the way literature is “translated” into the language of dance. “See that gesture he does?” she asked, pointing at a harrumphy Tom Johantgen. “That’s his ‘bah, humbug.’”

Slobodnik insisted that a story told without words is something purer, more powerful.

“Keep your bodies alive, people,” she ordered at a recent rehearsal. “It’s not steps; it’s a conversation. It’s an argument.”

Now Arts Editor Anna Weltner wants a tutu, too. And a tiara. Tell her how much you love fluff pieces at aweltner@newtimesslo.com.