In the zone: Grover Beach expands the size of its cannabis business district amid fears of pot biz bubble

The city of Grover Beach makes no bones about wanting to become a welcoming place for California’s bourgeoning marijuana industry, but finding the physical space to accommodate the potentially lucrative industry could prove to be difficult.

The city Planning Commission voted 4-1 April 12 to recommend that the City Council approve a revised plan to create a special overlay zone for commercial medical marijuana businesses, including processing, cultivation, testing, distribution, and even retail sales.

Initially, that zone was limited to 65 acres of land in an industrial-zoned area in the southwestern part of the city. But the City Council scrapped that plan in February, asking city staff to go back the drawing board, and expand the cannabis business zone, after local residents and business owners raised concerns that longtime businesses might be forced out in favor of marijuana businesses looking to swoop in and buy property. 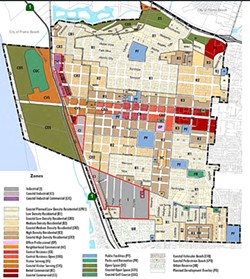 The revised land-use ordinance expands the original zone to allow commercial marijuana businesses in the city’s coastal industrial commercial and coastal commercial zones, upping the total size to 86 acres. About 15 percent of that area is vacant, according to data from city staff.

But even the additional acreage may not be enough to accommodate marijuana businesses eager to set up shop in Grover Beach and the existing businesses already operating in those three areas, according to Grover Beach City Councilwoman Debbie Peterson. Peterson, a realtor, conducted her own research of the potential economic impact of the overlay zone. According to Peterson’s research, just talking about creating the district led to a spike in property values and the reported displacement of some businesses.

“Everybody’s moving too fast,” Peterson told New Times. Peterson’s report, compiled using local real estate data and interviews with realtors and business owners in the proposed overlay zones, stated that 14 properties in the original southern industrial zone have already been put up for sale. As of March, at least one property was selling for as much as $1,000 per square-foot, up from the average of $200 per square-foot that properties in the same area were selling for in December 2016. Three properties in the potential zone have been sold, according to Peterson’s research, with the highest sale price being $2 million.

Peterson also claimed that 35 businesses in the area were “displaced” as of March 2017, including 20 businesses that have reportedly moved away or will go within 45 days, and another 15 at risk for being displaced within the next three months. Peterson cautioned against displacing current businesses for new ones and worried that speculation and the rush to sell or lease property to marijuana businesses would create an economic bubble similar to the dot-com boom of the 1990s.

“When you have a boom, you usually have a bust,” Peterson said.

Buckingham said that the city had also heard concerns that business might be forced out, but noted that those claims were difficult to substantiate.

“We are hearing some stories about displacement, but at this point it’s hard for the city staff to verify,” he said.

Following the Planning Commission’s vote to expand the area where the medical marijuana businesses will be allowed to operate, Peterson said the new plan would take some of the pressure off, but still questioned whether the space available would be able to accommodate both the incoming cannabis businesses and the current local businesses that might be displaced.

“Yeah, it helps,” Peterson said. “But the crisis remains.”

Currently, Arcata has about 23 businesses looking to operate in the specially designated zone, and three such businesses are already up and running, according to David Loya, Arcata’s community development director.

“We had a lot of interest,” Loya said.

Unlike Grover Beach, Aracta isn’t squeezed for space in its commercial marijuana zone. Loya said the area was full of blighted and empty properties that had fallen into disrepair. Creating the medical marijuana innovation zone has begun turning that around, Loya said.

“The property owners are making high quality investments,” he said. “We are getting exactly the desired result. These blighted properties now have money pouring into them.”

Loya said that some businesses were displaced with the creation of the zone, but indicated the number was low, adding the Arcata City Council was “very sensitive” to the existing businesses while creating the innovation zone.

The Grover Beach City Council will conduct a first reading of the zoning ordinances at its May 1 meeting.