No one has a voice quite like Neko Case. It’s the kind of voice you don’t see coming, one that sneaks up and completely disarms you with its openness, sly control, unexpected power, and fullness.

On “This Tornado Loves You,” she sings, “My love I am the speed of sound/ I left them motherless, fatherless/ Their souls dangling inside-out from their mouths.../ But it’s never enough/ I want you// I carved your name across three counties/ And ground it in with bloody hides/ Broken necks will line the ditch/ Till you ‘stop it! stop it! stop this madness!’/ I want you.”

The song’s sentiment is a nod to her punk roots but the alt-country delivery effectively encompasses her rather remarkable musical history. She ditched her parents at 15, played drums in a few Northwestern punk acts, headed to Vancouver for art school where she played with Maow, a punk act on the Mint label, as well as roots act the Weasels. These formative experiences teed up her current career, when she released The Virginian, her 1997 solo debut, a mix of traditional country covers and originals.

She continued to collaborate through college, most famously with the Vancouver indie super group The New Pornographers, eventually graduating from art school in 1998. With her student visa expired, she returned to Washington and began work on her solo follow-up, Furnace Room Lullaby. Pretty much all of her records are critically acclaimed, and she’s got a pretty fervent following.

Her complete solo discography was recently released on the Anti-Record label, which noted, “The release of this set gives listeners an excuse to appreciate the scope of one of the most individual and passionate artists making music today … When you take it all in, Neko’s journey from punk/country torchbearer to avant-pop icon has been staggering. This box makes a strong case for her fierceness of vision, pristine musical craft, unflinching lyrics, and of course, that voice!” 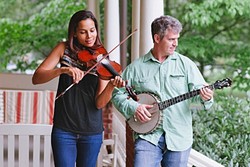 Giddens is the lead singer (and banjoist/fiddle player) for the Grammy-winning country, blues, and old time music act Carolina Chocolate Drops. Her vocal style has been compared to Odetta, Mahalia Jackson, and Rosetta Tharpe.

Powell is an Americana/bluegrass fiddler and banjo player playing everything from Appalachian to Cajun and Creole styles.

Together they’re going to demonstrate the breadth and depth of American genres, where they meet and overlap, as they work through folk, jazz, gospel, blues, and more.

To add to the fun, they’ll be joined on stage for a few songs by tap dancer Robyn Watson. This intimate show is brought to you by Goldenvoice, Cal Poly Arts, and Otter Productions Inc.

Collective Effort Events and Otter Productions presents Cherub, with opening acts Frenship and Boo Seeka, on Thursday, Nov. 17, at the Fremont Theater (7 p.m.; all ages; $20 to $30 at ticketfly.com).

Cherub’s break-out single, “Doses and Mimosas,” is a tripper’s delight with falsetto singing and synth sound building to a great chorus: “doses and mimosas, champagne and cocaine!”

According to their bio, band members “Jordan Kelley and Jason Huber take their fun very, very seriously. The pair behind the ambitious and emphatic Nashville duo Cherub craft hooky electro-pop that lyrically captures the risqué, pleasure-seeking impulses of their youth, while their studio expertise results in alluring grooves.”

They met in college when Huber was fronting a psychedelic folk-rock band, and Kelley was in the Nashville hip-hop scene.

“Some people question how authentic or serious we are about music,” Kelley said in press materials. “All of it is from the heart. Me and Jason try hard not to create some sort of cool-guy environment—we want people to feel comfortable.”

Added Huber, “We’re serious about what we do, but we’re also here to remind them to take themselves less serious once in a while.”

“People do tend to describe it as a tropical sound, but the truth is Brett was always trying to force a marimba into one of our songs and he finally got the opportunity,” Sunderland deadpanned in press materials.

This should be a hypnotic evening of electro-dance music.

Reach for the sky

Good Medicine Presents and Numbskull have a quartet of concerts slated this week, but let’s start with The Holdup, a San Jose-based reggae act with hip-hop and pop influences, which plays Friday, Nov. 18, at the SLO Guild Hall (7 p.m.; all ages; $14 presale at ticketfly.com or $16 at the door).

This is one of those bands that celebrates good times—they’re all about the party and having fun, which is why they’ve got the perfect opening act in James Kaye, a local hip-hop artist who recently moved to LA to bolster his career. Together, this should be a great evening of upbeat dance music.

The Holdup is touring in support of their single “Imperfections,” which has been blowing up! Since their inception, they’ve garnered iTunes’ Best New Reggae Artist of 2010 Award and reached No. 2 on the Billboard reggae charts back in 2011. They’re going places.

Before we get there, however, Good Medicine has Jamie Kent at Tooth & Nail Winery this Thursday, Nov. 17 (6:30 p.m.; all ages;  $12 presale at tickertfly.com or $15 at the door), with The Kenny Taylor Band opening. Kent was named the 2016 Durango/American Songwriter Sole Performer for his modern country rock sounds, which have been compared to Jason Isbell and Chris Stapleton, and pay tribute to Bruce Springsteen and Tom Petty.

Finally, The Expendables, with The Expanders and Law, play the Fremont Theater on Saturday, Nov. 19 (7 p.m.; all ages; $21 to $65 at ticketfly.com). Santa Cruz-based The Expendables have tapped into the surfing, skating, partying lifestyle of their hometown. Should be a blast. 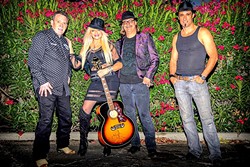 Over at SLO Brew, they’re doing something a little different this week. Instead of their 9 p.m., 18-and-older shows, they have a trio of 10 p.m., 21-and-older concerts starting on Thursday, Nov. 17, with Wordsauce, a local live hip-hop and funk act, and Reason to Rebel, a San Diego funk-alt-rock act. No cover listed that I could find. Then, on Friday, Nov. 18, Devin Welsh will release his album Surface ($5 at the door), when he and his band will play the whole album from start to finish. Also that night, hear Truth In The River (Matt Suarez, Albert Sanudo Jr., Justin Froese, and Glen Justice) and bluesman Billy Manzik. And finally alt-blues act The Ragged Jubilee plays Wednesday, Nov. 23, again, with no cover I could discover.

JK and the Rock’n’Souls play this Friday, Nov. 18, at Manny’s in Paso (9 p.m. to midnight). The Americana, country rock, and punk act plays songs like “Horse to Whiskey,” “Midnight Boots,” and “Awkward and Random”—all sentiments I’ve been intimately familiar with. This is a bar band of deluxe quality. Expect some select covers in addition to their originals. They’re apparently working on songs for the follow-up to their self-titled debut. 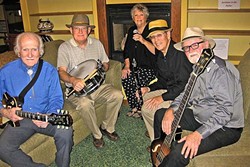 The Amigos Swing & Jazz Band and the Cool Notes will play the next Basin Street Regulars hot jazz concert this Sunday, Nov. 20, at the Pismo Vets Hall (1 to 4:40 p.m.; all ages; $10 at the door). The Amigos mix swing and jazz standards from the ’30s through the ’50s. They play two sets, and intermission band the Cool Notes bring their jazz and blues stylings in between.

The SLO County Band presents its 22nd annual Benefit Concert for Homeless Services on Sunday, Nov. 20 (3 p.m.; all ages; $10), in a program called Music for an Awesome Autumn Afternoon at SLO’s Mount Carmel Lutheran Church. Special guest conductor is CMC Warden Josie Gastelo! All concert donations and Thrivent Financial matching funds will benefit the Homeless Services organization. Expect music from the Broadway musical Carousel; popular music of the ’60s and ’70s including Stevie Wonder, the Doors, and the Eagles; and more. 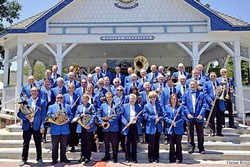 Ynana Rose and Holly Ann Lewis—two local musical powerhouses—will team up this Monday, Nov. 21 (6 p.m.; 21-and-older; free), at the next Songwriters at Play showcase at Morro Bay Wine Seller. “In the spirit of true collaboration, Holly and Ynana will add harmonies and their best musical tricks to each other’s music,” organizers promised.