The Gypsy Pyrates and their friends care about breasts-- 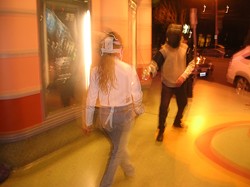 When Rasha Wyndsong, leader of the local Gypsy Pyrates guild, asked me if I could come to the Fremont theater in downtown San Luis Obispo—dressed as a pirate for a Princess Bride showing—I scoffed. Why not give me a challenge?

Rasha knew I had pirate gear ever at the ready. Over the years, I’ve written stories about her guild, a band of costumed ne’er-do-wells who regularly attend events like the local annual Renaissance Faire, so I’ve spent plenty of time with the scoundrels and scalawags that surround her. While researching and reporting on the folks who strap on swords and “arrrrr” at passersby, it’s easiest to blend in with an outfit of my own.

She apologized for the short notice, but was excited to tell me that she was spearheading a fundraiser for Enhancement, Inc., a health-promoting Morro Bay-based nonprofit that focuses on “quality of life issues for breast cancer survivors.”

Life is never dull for Rasha and her crew. Plus, there’s a point behind her pirating—or pyrating, as she’d prefer me to spell it. Forget looting and pillaging: The Gypsy Pyrates want to save the ta-tas!

That’s what they were shouting when attendees began arriving at the theater
on Feb. 8. 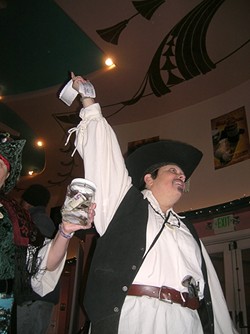 My wife and I had arrived a bit early, while people were taking their places. Jesse Blue Cloud Campbell, a Renaissance fair regular who used to have fangs (their absence now is a long story involving comics legend Stan Lee), donned a dark cloak and climbed into a cart. When the doors opened, he spread his arms wide and bellowed, in his best Andre the Giant voice: “I am the Dread Pirate Roberts! Buy my raffle tickets!”

Steel clashed outside as members of the local Salle de Fers Fencing Club demonstrated the artsy sport—or maybe it’s a sporty art. Cal Poly fencers did the same thing inside.

Before the movie started, Rasha led a costume contest that boasted only one Princess Buttercup but three Westleys. How to choose? Audience members clapped and cheered for their favorites, but it was nothing compared to the noise when the movie started.

It wasn’t Rocky Horror Picture Show-level screaming, but it could get there in a few years. People shouted lines along with characters on the screen. After Wallace Shawn uttered his infamous “Inconceivable!” someone yelled something like, “I don’t think you’re using that right.” Another voice, tinged with scorn, said the correct line: “I do not think it means what you think it means.”

As I noticed I was sitting in front of Enhancement, Inc.’s executive director, Shoosh Crotzer, I began thinking more about the cause behind the event. I also realized there was a certain poignancy to Westley’s line late in the movie: “There’s a shortage of perfect breasts in this world. T’would be a pity to damage yours.”

After the movie, raffle tickets were pulled and prizes—a lot of really great prizes, like hotel stays and fencing lessons and socks and stuff from HepKat and Kwirkworld—made their way to lucky winners.

Rasha said Fremont Manager Mark A. Scaccianoce reported this year’s audience (about 450 people) was double last year’s Princess Bride attendance. In all, the Gypsy Pyrates and their friends raised about $400 for Enhancement, Inc. Nick Powell, a New Times intern who also works for San Marcos Inn in Morro Bay, announced a companion fundraiser: The inn is donating $5 to Enhancement, Inc. per room sold throughout the entire month of February.

As of the 14th, Regional Manager Michelle Jacquez told me, the inn was sitting on $1,000 to give to the nonprofit. 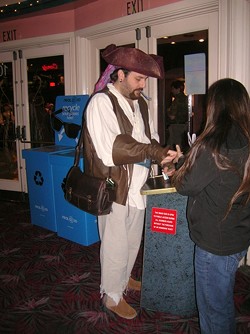 On Feb. 15, Rasha and her partner, Leslie Neely, stopped by New Times for a wrap-up talk. Neely, a member of the Paso Robles-based Bards, Rogues, and Drunkards guild, is a breast cancer survivor. She was lucky, as cancer-fighters go, in that her cancer was caught early: during her first-ever mammogram at age 41. She was diagnosed in May 2009 and had a lumpectomy in June, coupled with chemo. By new year of 2010, she was clear.

“Cancer can give you gifts,” she said, knowing how odd that sounds. “The gift that I got from cancer was finding wonderful people who went out of their way to help me … like the stranger who holds the door open for you because you’re bald and wearing a pink scarf.”

Leslie was moved along her road of recovery by the Hearst Cancer Resource Center, through which she learned about Enhancement, Inc., which offered workshops, a retreat, and an education she, as a registered nurse, was surprised to receive. She learned about the dangers of lymphedema, a risk Rasha was also surprised to learn about. They credited Leslyn Keith of Central Coast Lymphedema Therapy as a literal lifesaver. Enhancement, Inc. is seeking to educate the public—and doctors—about lymphedema, too.

Rasha suffered from a decade of undiagnosed breast pain. After her sister was diagnosed with cancer, Rasha decided to cut her risk, as it were, with a mastectomy. (She occasionally wears a prosthetic these days—her “belly dancing boobs”—but that’s another story. One I probably won’t dress up for.)

Check out enhancementinc.com to learn more about the nonprofit or to donate. Visit sanmarcosinn.com to book a room. And keep your ears out for a pyrate-led fundraiser next time the Fremont shows Princess Bride.