Andrew Bird may be an acquired taste, but those who have acquired it are continually blessed as this Chicago-born, LA-based multi-instrumentalist, composer, and indie music hero reinvents and extends himself in new and wondrous ways. Classically trained in the violin, he's explored small-group swing with the Squirrel Nut Zippers, jazz with Kevin O'Donnell's Quality Six, and Gypsy, folk, rock, and even German lieder sounds. 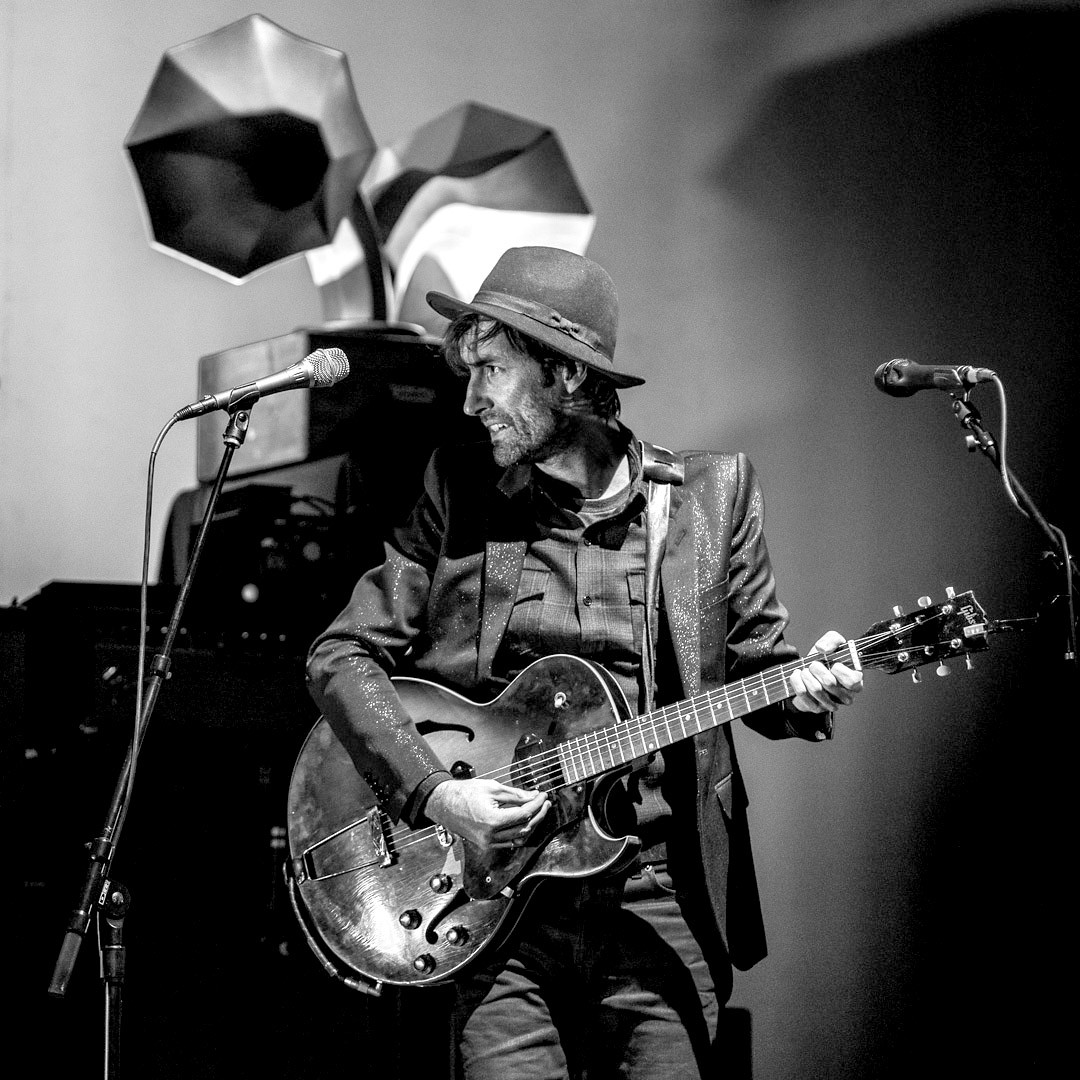 His solo work and work with his band Bowl of Fire have yielded more than a dozen studio albums, with some landing at No. 1 on the U.S. Folk charts such as Break It Yourself (2012) and last Are Serious. His live shows often utilize looping technology, which allows him to record a track and play live over it, layering more and more sounds. He's currently touring in support of Echolocations: River, which was released on Oct. and is the second in a planned series of four live recordings captured in unusual but sonically stunning locations. The first was 2015's Echolocations: Canyon.

New Times: Your career has been to say the least. Can you think of a common element or philosophy that runs through your music?

Andrew Bird: Well, yeah, I think it might boil down to ... "reactivity" I guess is the word, reacting to my environment, and this Echolocation project carries that thread to an extreme. I really enjoy putting myself on the spot and creating tricky situations I have to get out of, in which I'm responding in the moment with my own instrument or my voice bouncing off walls. That doesn't define everything I do, of course. There can be a lyrical aspect. In general, I'm not super premeditated. I like the live shows to be me just barely pulling it off.

NT: You're known for improvising during your live performances. Is it because you're bored with the song, you can't help yourself, you think your audience needs to be challenged, or what?

AB: It's not to challenge the audience, but I rely less on certain things when I play live. When people see a band they know, they might say, "There's a song I know," but personally I find those shows boring, so I do what I like to see, which means taking more risks. That doesn't mean complicated or challenging. Sometimes my shows are very melodic or fairly simple, but I rely more on the idea that something's being generated creatively, and in that moment it could all fall apart. I want that edge-of-your-seat feeling, the audience to think, "How is he going to get out of this one?" I don't plan it that way but I stumble on it. What I'm doing is subject to humanlike error and leans toward falling back on the spirit of jazz, though listeners might not recognize it as such. We're not playing jazz standards but we're playing with the freedom of jazz and that keeps me vibrant.

NT: Your whistling is remarkable. Are you a naturally talented whistler or did you have to work at it?

AB: I just do it constantly. I do it unconsciously when I'm washing the dishes. Someone might assume that I'm in a fantastic mood all the time with all the whistling, but that's not the case. I just whistle obsessively. At I didn't do it at my shows and then I thought, "I'm whistling all day, why stop onstage?" It's a handy way to carry a melody and a good way to get people's attention. In the early days playing solo, I would hold my breath and hold a note so long that it would stop conversations, put people in self-preservation mode as if they're on alert. It's also good texture with the guitar or when making looping cuts on stage. It's kind of like a singing voice.

NT: Let's talk about Echolocations: River. I understand the videos created in the making of this instrumental album will be part of your fall tour. Tell me about how they'll be incorporated.

AB: So the project started just on a whim when a friend and I went to Utah. We drove six hours and hiked for six hours on top of that to reach a canyon, which we had to sort of repel down to, all because I heard the acoustics were amazing down there, and so I made a field recording and took it home with the idea to make a sonic map responding to my environment. I like waiting to see what wants to hear, not what I want to play but what wants to hear, and I end up with a document, sort of a map of a spot on earth but made with music. I took it home and built it up in my studio and started taking the idea to other places. I chose the LA River [for the current project] because it was close at hand and had an interesting look with these sorts of bridges and arches. The idea is you listen to the record and get a distinct idea of the character and architecture of that space.

NT: I understand the video of the recording process as you're playing while standing in ankle deep water will be screened during his multi-media concert.

AB: Yes, I'm building a new experience out of what was [videotaped] involving animation and layers, with little bits and pieces of space so you as the viewer will have to use your ears to complete the picture. I've never done anything like this before.

NT: Will your Performing Arts Center show also dip into your catalog?

AB: The first 25 minutes will be the Echolocation stuff and then we'll segue into the trio and I'll play songs from, I don't know, a bunch of my records, a loose reinterpretation of these songs. I spent the summer playing a lot of gigs at outdoor venues, playing with a very mighty sound, so I'm looking forward to being inside and dialing it down. 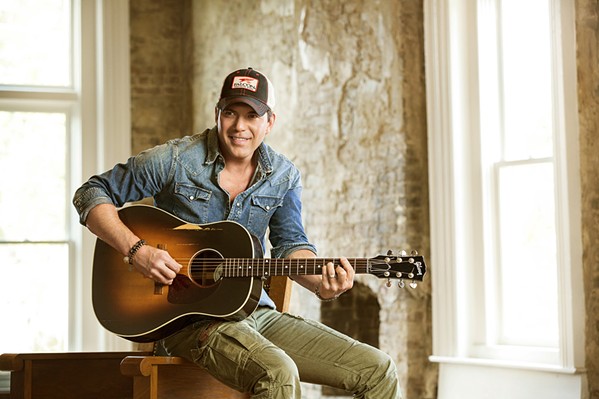 Numbskull and Good Medicine Presents host country singer-songwriter and Rodney Atkins this Thursday, Oct. 12, at Tooth & Nail Winery (6 p.m.; all ages; $35 at ticketfly.com or $40 at the door). In 2015, he released a greatest hits album, and his last studio album, Take A Back Road, yielded his sixth career No. 1 hit and single to date with the title track. 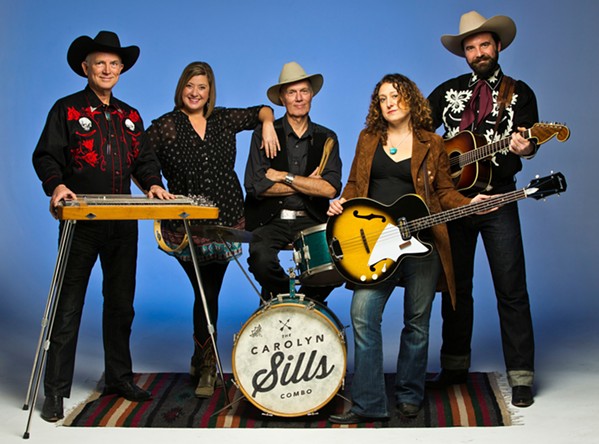 Now's the time to secure your tickets for one of the major Halloween parties coming up in a couple of weeks. If you're in the SLO Town area and want to dance to a ripping live R&B band, check out the Dead Man's Masquerade Party hosted by local public radio station KCBX, on Friday, Oct. 27, at the SLO Masonic Lodge (7 to 10 p.m.; $25 presale at the station or kcbx.org/2017-kcbx-halloween-party, or $30 at the door).

Burning James and the Funky Flames will provide the sounds, a no-host bar will be available, and Bon Temps Creole Café will offer delicious Southern cuisine for sale. Prizes for scariest, cutest, and best overall costume will be awarded. Proceeds benefit KCBX Public Radio.

If you're in South County and want to dance to some classic '80s cover songs, look no further than the Rockin' Halloween 805 Party brought to you by HCE Productions on Saturday, Oct. 28, at the Pismo Beach Golf Course (5 to 10 p.m.; $20 general admission or $40 VIP at eventbrite.com).

JD Hardy will act as emcee and LA '80s cover band Centerfold will headline, playing hits such as The Go-Go's "We Got The Beat," Cyndi Lauper's "Girls Just Wanna Have Fun," Van Halen's "Jump," Journey's "Don't Stop Believin'," and a whole lot more. Erick Tyler will open the show. The grand prize for their costume contest is a two-night staycation in a four-bedroom condo in Pismo Beach (a $1,500 value). Food and drink from Fin's Seafood Restaurant will be available for purchase. This one benefits the Five Cities Homeless Coalition.

If you're up in the North County, the Halloween Harvest Costume Ball will be blending Hollywood-style production with Central Coast wine country flair when Central Coast Live presents two nights of fun at Tooth & Nail Winery on Friday, Oct. 27, and Saturday, Oct. 28 (7 or 8 p.m. to midnight; 21-and-older; $100 general admission or $175 VIP, at halloweenharvestcostumeball.com).

The adult-themed party will feature interactive props, creeping fog, dramatic lighting, and spooky sound effects, as well as professional actors and entertainment by renowned mentalist and magician Rich Ferguson (check out his YouTube channel—he's an amazing illusionist and prankster). DJ and emcee Paul Thompson will provide great Halloween-themed music. Ten percent of the proceeds will benefit Must! Charities, a local nonprofit.

A costume contest for scariest, funniest, sexiest, most original, and couple will award $1,250 in cash prizes. Sabrina Lovell, a 30-year Tarot veteran, will offer complimentary readings. Gary Kramer, founder of Kramer Guitars and owner of Gary Kramer Guitar Cellars—a wine tasting room and guitar museum in Paso Robles—has donated a $3,000 Crusader Deluxe guitar as a raffle item. Local restaurants will be offering small bites, and of there will be and lots of it.

Let's be careful out there, people!