Trivia time! What do Indigo Girls and Milli Vanilli have in common? Well, in 1990, they were both nominated for the Best New Artist Grammy Award. 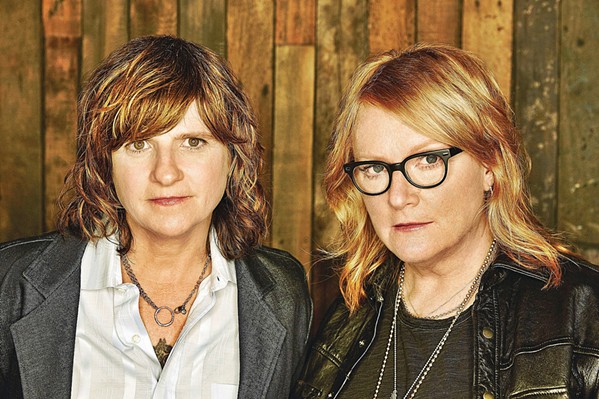 Later, Milli Vanilli—the German R&B duo consisting of dancers and models Fab Morvan and Rob Pilatus, who sold millions of records in the late '80s and early '90s—became synonymous with music industry corruption after it was discovered their voices never appeared on Milli Vanilli recordings and during performances they lip-synced the lyrics. They were later stripped of their Grammy Award for obvious reasons.

"I'm tryin' to tell you somethin' 'bout my life/ Maybe give me insight between black and white/ And the best thing you've ever done for me/ Is to help me take my life less seriously/ It's only life after all, yeah," Amy Elizabeth Ray and Emily Ann Saliers sing on "Closer to Fine," a song about trying to find "the answer" to life but discovering it's easier said than done.

"And I went to the doctor, I went to the mountains/ I looked to the children, I drank from the fountains/ There's more than one answer to these questions/ Pointing me in a crooked line/ And the less I seek my source for some definitive/ The closer I am to fine," they sing, pointing out that our revered sources of knowledge and inspiration don't necessarily teach us, and that there are many paths to wisdom, and most importantly, that instead of some "definitive," be open and accepting.

You don't have to go to college—"I spent four years prostrate to the higher mind/ Got my paper and I was free"—or use mind-altering substances—"I stopped by the bar at three A.M./ To seek solace in a bottle, or possibly a friend/ And I woke up with a headache like my head against a board"—or turn to religion—"Yeah, we go to the Bible, we go through the work out/ We read up on revival, we stand up for the lookout."

"Closer to Fine" admits it's easier to succumb to disillusionment than to stay positive—"Well darkness has a hunger that's insatiable/ And lightness has a call that's hard to hear"—and that it's easy to be overwhelmed by negativity—"I wrap my fear around me like a blanket/ I sailed my ship of safety 'til I sank it"—but that if we just roll with life and embrace the mystery, the closer we'll be "to fine," which is a damn fine message because "it's only life after all, yeah."

Over their career the duo—who generally write separately and come together to work on arrangements—have released plenty of iconic songs, like "Galileo," "Hammer and Nail," "Power of Two," "Shame on You," and many more. They've recorded 14 full-length studio albums, most recently 2015's One Lost Day. They have a lot of material to draw from, and at a Portland show earlier this month, they performed tracks like "Three Hits," "Spread the Pain Around," and "Sugar Tongue." After their 19-song performance, they came back for an encore to play "Share the Moon" and "Closer to Fine."

You can see them yourself this Saturday, June 30, when Indigo Girls play the Fremont Theater (9 p.m.; all ages; $40, $50, and $65 at Boo Boo Records or eventbrite.com). Lucy Wainwright Roche will open the show. She's Loudon Wainwright III and Suzzy Roche's daughter, and the musical talent didn't fall far from the tree—great voice, great songs! Should be a terrific night. 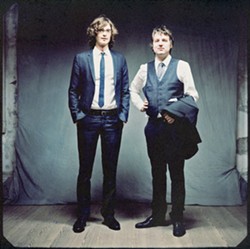 Also, don't forget the Fremont has Americana duo The Milk Carton Kids on Thursday, June 28 (8:30 p.m.; all ages; $30 to $50 at eventbrite.com and Boo Boo's). They're touring in support of All the Things That I Did and All the Things That I Didn't Do, out on June 29, the day after this show. It's their first album that they brought a band in the studio with them.

"We wanted to do something new," Kenneth Pattengale said in press materials. "We had been going around the country yet another time to do the duo show, going to the places we'd been before. There arose some sort of need for change."

"Musically, we knew we were going to make the record with a bigger sonic palette," Joey Ryan added. "It was liberating to know we wouldn't have to be able to carry every song with just our two guitars."

I don't know if their Fremont show will have a full band or be just the duo, but the terrific singer-songwriter J.S. Ondara will open.

Numbskull and Good Medicine Presents don't have a big slate of shows this week, but they do have two great ones, starting with an outdoor show at SLO's Mission Plaza this Thursday, June 28, when The California Honeydrops play (5:30 p.m.; all ages; $20 presale at ticketfly.com or Boo Boo's, or $25 at the gate).

It's impossible to overstate how much fun this band is live. Fronted by the charismatic Lech Wierzynski, who was born in Poland but fell in love with American blues and jazz as a teenager in Washington D.C., they play everything from New Orleans style second line to R&B to roots and beyond. Lech has a great voice, plays a mean trumpet (and guitar), and his band is tight! Gutbucket bass, jug, washboard, and other unusual sounds and instrumentation make their way into the music.

Next Thursday, July 5, amazing Americana folk duo Birds of Chicago play The Siren (7 p.m.; 21-and-older; $20 presale at ticketfly.com or $25 at the door). The husband and wife team of JT Nero and Allison Russell (who was in the Canadian roots act Po'Girl) call their sound "secular gospel."

They released the live album Live From Space in 2013, their amazing debut studio album Real Midnight in 2016, the excellent EP American Flowers in 2017, and are now touring for 2018's Love in Wartime, another great American folk album with global influences. It's gonna be a good one.

Just a quick reminder that Primus and co-headliner Mastodon play the Avila Beach Golf Resort this Thursday, June 28, in a beach concert brought to you by Otter Productions, Inc. (gates at 5 p.m.; all ages; $40 to $249 at eventbrite.com). 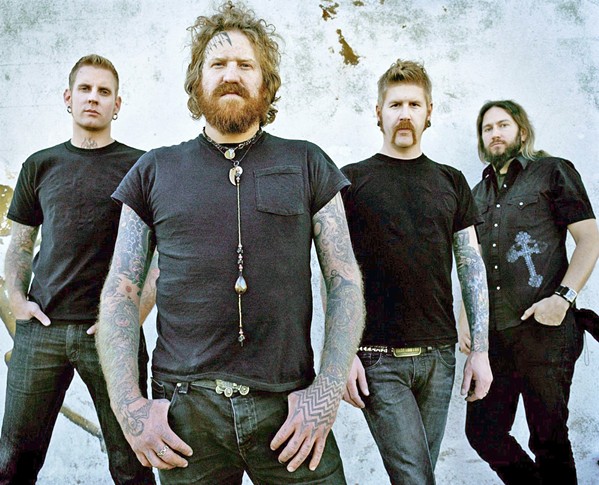 I told you about all things Les Claypool and Primus last week, so let's talk about Mastodon, an Atlanta-based heavy metal band not to be confused with the Christian rock band Mastodon.

In case you're unfamiliar, Mastodon has a very prog-rock sound that's grown increasingly focused and refined over the course of their seven studio albums, most recently 2017's Emperor of Sand, their most commercially successful album to date, which featured the singles "Show Yourself" (No. 4 on Billboard's Mainstream Rock Songs chart); "Steambreather" (No. 18); and "Sultan's Curse," which won the 2018 Grammy Award for Best Metal Performance.

Expect two super heavy, super talented bands to rain down some metal goodness all over you!

Norteño music legends Los Tigres del Norte play Vina Robles Amphitheatre this Saturday, June 30 (8 p.m.; all ages; $55 to $75 at vinaroblesamphitheatre.com). These seven-time Grammy and eight-time Latin Grammy award-winners are one of the biggest names in Latin music, selling more than 37 million records, 24 No. 1 albums, and more than 50 No. 1 singles.

A Billboard magazine cover story declared the band "the most influential regional Mexican group in the United States ... Los Tigres del Norte are not just another popular musical act.... Instead, they're widely viewed as the voice of the people."

Their most recent No. 1 album, Realidades (Realities), finds the group wearing "the mantle of social messengers for their community, detailing true-life stories of danger, discrimination, and social rejection often faced by both Mexican and Mexican-American fans on either side of the border," according to their press materials.

Don't expect stereotypical Latino machismo. In 2015, the band was honored by GLAAD for their song "Era Diferente," perhaps the first Norteño song to advocate for LGBT tolerance. ¡Viva Los Tigres! 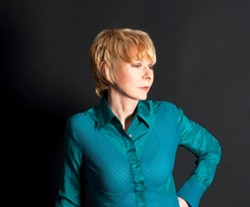 Back in the 1990s, there was a local band inspired by the sounds of Medeski, Martin, and Wood, and the 1970s electric sounds of Miles Davis, James Brown, and Parliament/Funkadelic. That band was Functus, a tighter-than-a-drum trio featuring Steve Campbell, Jacob Odell, and Dylan Johnson. They enjoyed quite a run both locally and beyond, but eventually the various members spread across the country, with only Johnson staying local and playing in a number of different bands and genres. Well, the trio is reuniting for a very rare reunion this Friday, June 29, at Sweet Springs Saloon (9 p.m.; 21-and-older; free). Get funked!

Central Valley band August returns to the Central Coast for two gigs this weekend, on Friday, June 29, on the Avila Beach promenade (4 to 8 p.m.; all ages; free); and Saturday, June 30, at Rancho Nipomo BBQ (8 to 11 p.m.; $15 at the door). This 10-piece Latin rock juggernaut has been playing together since 1974, and they frequently play the Tequila Festival. Good stuff! 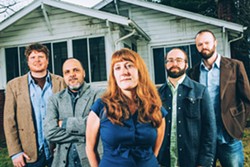 SLOFolks presents Amanda Anne Platt & The Honeycutters this Saturday, June 30, at Castoro Cellars (7p.m.; all ages; $25 at castorocellars.com/events or by calling (805) 238-0725). "We're thrilled to open our summer series at the Castoro outdoor stage with this awesome up-and-coming group out of Asheville, NC," SLOFolks wrote in an email. "They've been making waves across the country with Amanda's fresh, crisp songwriting and singing, coupled with the band's distinctive old-school country Americana sound. There is an empathetic and charming wit engrained in Amanda's songwriting. She has a knack for accessing a deep well of emotion and applying it to her storytelling, whether she is writing from her own experiences or immersing herself into the melody of emotions in another person's life."

Do you love classic rock songs but yearn for some new material? Look no further than AJM Band fronted by songwriter Andrew Jay Magnuson. The band will soon release The Hard Way, a new collection of straight ahead rock 'n' roll in the same vein as Aerosmith, Black Crowes, and the Rolling Stones. They play Pine Street Saloon this Saturday, June 30, and the Grover Sizzlin' Summer Concert Series on Sunday, July 1, leading up to their album release party at D'Anbino's on Saturday, July 14. Δ