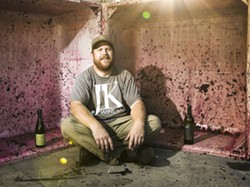 When winemaker Justin Kahler moved to Paso Robles wine country to create his own brand, he already knew he couldn’t use his name on the label. That brand name was taken long ago by Justin Baldwin, owner of Justin Vineyards. But Kahler chuckled while admitting he’s used to that happening to him. It started when he joined an elementary school baseball team that had nine boys named Justin. The coach gave them all nicknames: Kahler’s was JK, and the letters seem to have stuck with him for life.

It makes sense that he uses his initials for his business name, JK Wine Company, but that’s not the name prominently featured on his wine labels. Kahler makes two brands, Katin and Arada. The first, a combination of his wife’s and his name, was something Katie Kahler happened to write down while doodling, and he said he liked the sound of it. Katin is devoted to Rhone varieties. The other label, Arada, is a Spanish term meaning “plow the ground.” That’s what the Franciscan Padres called the plow they used to plant vineyards in the late 1700s. Arada features single vineyard Cabernets, Cabernet blends, and Albarino.

Meeting Kahler for the first time, I was impressed by his philosophy: “Our mission is to create wines of unequalled elegance and quality.” I could taste it in Kahler’s offerings, which he discussed with me while we sniffed and sipped through his impressive current releases. His Arada 2008 Albarino Edna Valley, grown at Jack Ranch Vineyard, is elegant and beautifully balanced.

“The grapes were hand-picked and fermented in neutral French oak barrels,” he said. “There’s no oak influence except the richness and warmth you get from barrel aging without malolactic fermentation. I look to the Templeton Gap region for white wines to hold on to acidity.”

The delicious Katin 2008 Viognier, grown in the cooler Templeton Gap, comes from the Valhalla 5-acre vineyard formerly farmed by Rhone wine legend John Alban. Kahler said: “The Templeton Gap is the sweet spot for white wine; it’s all about balance and elegance.” He also prevented malolactic fermentation in the Viognier to retain its natural acidity and balance.

It’s still said that it takes more than passion to make your wines stand apart from the rest. But that better describes oenophiles than Kahler, who can boast an impressive résumé.

“I first got into wine when I was in Oakhurst, working at Erna’s Elderberry House,” Kahler said, recalling the renowned bed and breakfast where he worked for three years. Their restaurant garners critical acclaim for its epicurean dining experience. “The wines I got to taste there really opened it up for me. I learned the difference between varieties and regions, and tasted great wines like 1970 Mouton, Crozes-Hermitage, Sauternes, and Ports.”

He left to attend Fresno State where he had a triple major: chemistry, enology, and viticulture.

He stayed in touch with 15 other winemakers in his classes; all of them, he noted, are working on the West Coast, from Oregon’s Willamette Valley to Santa Barbara County. He had also established friendships with salespeople working for the prestigious Henry Wine Group, who turned him on to many more exclusive wines.

“We always had wine on the table,” he remembered, “and we powered through some great wines.”

After graduation, Kahler landed an excellent winemaking experience: an internship at Church Road Winery in New Zealand, one of the country’s oldest, founded in 1897. He recalled that New Zealand winemaking is steeped in Bordeaux tradition. Kahler also worked at the famed Peter Michael Winery in Sonoma. He received job offers from Napa Valley and Walla Walla, Wash., but he chose to move to Paso Robles: “I was California born and raised, and still have family here. And I love Rhone and Bordeaux varieties.”

During our tasting, it came as a complete surprise when Kahler said his day job is wine grower for Michaud Wine Company of Monterey County. The grapes are grown in the famed Chalone region, near Soledad, where Michael Michaud worked several years before planting his 28-acre vineyard there. In 2007, a Fresno classmate introduced Kahler to Michaud.

“When we met, we clicked on everything,” Kahler said. “We moved production to Rabbit Ridge in San Miguel.”

They use their own equipment, only leasing space. Kahler manages everything, from the vineyard crew to the winemaking, and makes his wines there.

“The great thing about Michael is the focus on balance and acidity. Michaud is primarily focused on Burgundy, so I’m working with a good cross section of varieties,” Kahler noted happily.

There are three Katin 2007 Syrahs, each a unique wine expressing the distinctive vineyard where it was grown: Del Rio in Oregon’s Rogue Valley; Michaud in Monterey County’s Chalone; and Glenrose in Paso’s Westside region.

“I’m not interested in mediocre,” Kahler explained. “I’m seeking out the coolest climate Syrahs from Oregon, Monterey, and Paso Robles. I hope to get more from Washington State, Sonoma Coast, and Santa Barbara County.”

The Oregon expressed rich fruit that melded with typical earthy qualities. Michaud Vineyard grows only 1.8 acres of Syrah, with cuttings from Jean Louis Chave in Hermitage, France, and Kahler gets half of it. This beautiful, elegant Syrah had what he called the classic expression of violets and white pepper. Glenrose Vineyard gives him four rows of terraced vines, which Kahler said showcases Paso Robles: “It represents what Syrah is about. We get great spices but it’s more fruit driven.” The most expressive of the three, it offers ripe, rich flavors without being out of balance.

Lastly, we tasted interesting barrel samples: an Arada blend of Bordeaux and Rhone varieties; and a 2007 Katin Syrah and Viognier blend, 90 and 10 percent, respectively. Of the former, he said: “It’s my fun blend, which will be priced around $20. I like opportunities to over-deliver on quality.”

His dedication to single vineyard selections motivates his preference for sustainably farmed vineyards. Kahler finished: “It’s really nice to be able to make wines I love making. I have lots of room to express my winemaking skills without having to fit into the marketing box. I can express my freedom, respect for the land, the vineyard, and expressions coming from the vineyard.”