Look out for new inventions in San Luis Obispo! Located in a spacious second story suite in the back of the same building that houses the upscale apparel retailer Patrick James, Sanpei Optics is an innovative eyewear company with brand-new, high-tech designs for sunglasses. The eyewear products include two different designs, known as I.M.I.O. (for “Inspire Me, Inspire Others”) and G.I.Y.O. (for “Give It Your All).” 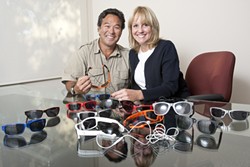 Longtime San Luis Obispo resident Richard Sanpei came up with the idea for the glasses while he was working as a general contractor and watching construction workers fumbling with their earplugs. He conceptualized glasses with a temple bar that would hold ear buds in place and added polarized lenses, frame rotation, and the ability to adapt to prescription lenses. His retractable and fully adjustable hinge temple bar was granted a U.S. Utility Patent in 2002.

The ear buds Sanpei Optics sells are waterproof and contain high-fidelity sound from 10mm drivers in order to deliver rich bass and clear highs, according to Sanpei. The ear buds are compatible with iPod, iPhone, Android, BlackBerry, Nook, and Kindle, and come in three different sizes. Due to the flexible hinge design, Sanpei Optics’ glasses and ear buds can be used separately as well as together, and it’s even possible to wear the glasses with only one ear bud in them.

Athletes are the target audience for these products, but that’s not intended to be limiting.

“Sanpei Optics’ products were designed to be used by people with highly active lifestyles,” Sanpei said, “but are also useful in many professional applications, such as heavy equipment operation, the airline industry, or the military as well as everyday home and hobby use.”

Sanpei Optics officially opened in January 2012 and is co-owned by Sanpei and his wife Linda Parker Sanpei, a public relations worker, and employs marketing and social media consultant Johnny Page. Prior to opening their business, they developed strategies with help from the Orfalea College of Business at Cal Poly, and they decided to gain support through crowd funding, a technique developed in the early 20th century and once used by Harper Lee, author of To Kill a Mockingbird. The technique was popularized in digital format by many websites including Kickstarter and Indiegogo, launched in 2008 and 2009, respectively.

Kickstarter is probably better known, but Parker Sanpei decided to use Indiegogo instead because “the interface is much more user-friendly, and it is widely used by an international audience. We’ve been receiving e-mails from potential customers in Italy and having to use Google Translator,” she said.

Sanpei Optics recently launched a 40-day funding campaign to pull in $30,000 from international donors on Indiegogo, available at indiegogo.com/sanpeioptics. The campaign is set to end on Dec. 3 at midnight. Customers on Indiegogo can choose between six different Sanpei Optics products and bundles with prices starting at $25 and going as high as $800. The “adventure pack” contains a Sanpei Optics light-weight microfiber and mesh sport pack and an eco-friendly reusable metal water bottle. The owners of Sanpei Optics look forward to the upcoming five weeks in anticipation.

Teens on the cusp of high school graduation can peruse roughly 60 secondary education options in one place at College Night at Cuesta College’s student center on the San Luis Obispo campus Nov. 5. Representatives from 12 states and several California schools will be on site from 6 to 8 p.m. There’s no cost to attend, and teens with valid student IDs can ride Regional Transit Authority buses to the event for free. …

Volunteer to help wrap presents and provide a cheerful Christmas for local needy children by participating in the 2012 Children’s Hunger Fund Toy Wrap on Nov. 10 from 9 a.m. to noon. Organizers are asking volunteers to register online for the event at toywrap-slo-2012.eventbrite.com. It’s free, but space is limited. Please print out a ticket and bring your own scissors and tape.