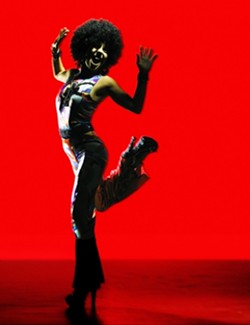 # Leslie Baumberger tells her dancers to put on their "Pop Music" costumes as she cues the music. Fifteen minutes later, 16 or so girls and a lone male dancer have assembled. One dancer is missing her wig. The rest look like they raided a thrift store, laden as they are with day-glo wigs, boppers in assorted colors, jewelry, and clothing vibrant enough to put Bobo the clown to shame. Three younger dancers wearing dresses they could have stolen from Minnie Mouse, red Wizard of Oz shoes, and blonde Marilyn Monroe wigs are the only characters who match.

"Pop Music" is a comedic dance, choreographed by Suzy Miller for the American Dancers. Miller--the artist responsible for bringing the pizzazz to SLO Little Theatre's legends series--choreographs the majority of the troupe's competition dances. Baumberger estimates that the 18-member company travels three times a year, competing across the stages of Europe, Russia, New York, Las Vegas, and Los Angeles.

The dancers may become comedians when the music for "Pop Music" fills the studio, but Baumberger insists that, at heart, they're highly competitive and dedicated athletes.

"This is a huge time commitment for these kids," she said. "It does impact their social life elsewhere."

And while the American Dancers are well known on the competition circuit, every time they pack their bags to perform in a foreign city, state, or country, the people they most value--friends, family members, and teachers--miss the opportunity to see what they're capable of. Which explains the degree of enthusiasm they bring to their annual local show, hosted this year April 5 and 6 at the PAC. This year's performance, "Rhythms, the Art of Dance," marks the troupe's 15th annual local showcase, and many of the pieces that won medals and acclaim in competition--like "Pop Music" and "Fallen Angel"--will be making an appearance. 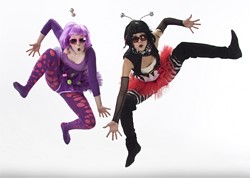 # The show, the performers insist, is not a recital.

"People just don't realize how brutal it is," added Sheridan Torgerson, a fellow senior who's been dancing with the studio for 16 years. "We dance through injuries. We blister our toes. We have to be strong. We have to do lifts and be lifted."

The performers also have to field questions from friends about why they spend the majority of their time in a dance studio. Many of them attend high schools that don't have dance programs, and are tired of watching sports take precedence over their passion: a complex combination of art and the physicality of athletics. It's not unheard of for the young artists to spend 25 hours a week perfecting their craft, a time commitment that nearly matches that made by a fulltime high-school student.

In response to this desire to prove themselves on their home turf, the performers will be dancing across all genres--tap, ballet, contemporary, hip hop, and jazz--and drawing inspiration from such legendary choreographers as Bob Fosse. And the American Dancers will be joined by a veritable mob of guests, from an elderly tap dancing class to Ballet Theatre of SLO to troupe alumni.

The dancers seek to showcase the diversity of their repertoire, but the purpose of this year's show is to explore dance as an art, an aim that necessitates a thorough representation of many genres.

# Bachelor pointed out that the key to producing quality art is drawing from various foundations, thereby allowing the artist to develop his or her own style.

"And our show has everything in it," she concluded. "Dancing is an art form, and we bring everything. Technical skill is really important, but without creativity and imagination, it would all start to look the same."

In addition to drawing from several genres, the American Dancers will be stepping outside standard boundaries of dance to express their art. In one piece, titled "Dream in Color," the performers actually paint a picture. They're accustomed to pushing limits of the art, in part because they're judged on creativity in competition.

"We only travel to compete about three times a year--just enough to get the value out of the competition," Baumberger said. "I think you can lose sight of why we go to these things. For us, it's about getting feedback from respected dancers. We always go somewhere where we're going to learn something."

Thus far, that feedback has been overwhelmingly positive. On several occasions, the team has turned out a performance that earned them a platinum award, which requires a score of 98 to 100 from all three competition judges.

# For the handful of graduating seniors in the group, the demands of competition may soon be a thing of the past as college and the future sweep them in new directions. But they've got at least one more opportunity to share their artistry and athleticism with the community. Still, the group of young dancers in black leotards and green headbands preparing for class serve as a reminder of the younger generations eager to don wigs and boppers of their own.


Arts Editor Ashley Schwellenbach once danced herself into not one, but eight corners. Call her an octogenarian at aschwellenbach@newtimesslo.com.