Wings of Change is available for viewing anytime, day or night, outside the Deprise Brescia Art Gallery at 829 10th St., suite B, in Paso Robles. To participate in or learn more about Veterans Voices, reach out to Deprise Brescia at deprise@deprisebrescia.com.

Orange, yellow, black, and green wings swing overhead, twisting in the wind. Suspended from an oak tree along Pine Street in Paso Robles, a 4-foot butterfly looms over the sidewalk.

A much smaller cousin, gold and blue with black accents, flies a little closer to the trunk. Inside the Deprise Brescia Art Gallery's courtyard, another set of 4-foot wings catches the waning light, glimpses of symbols outlined in black, white, and gray. 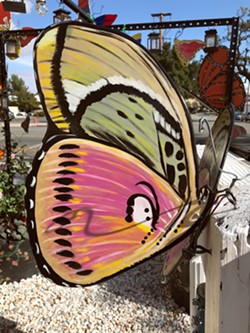 More butterflies adorn the garden of wine barrel planters on the corner of 10th Street and Pine. Some look true to form—a 4-foot monarch here and 18-inch swallow-tail there—while others are covered in colors or words of inspiration. Each was painted by a veteran and/or their family as part of the Veterans Voices art project.

The Wings of Change garden installation will morph and change through June 2021, as more butterflies take their places along walls and below branches, lit both during the day and at night.

"The butterflies are coming and going and growing and changing, all outside and in the gardens," Deprise Brescia said. "It's cool, because you get to see the veterans expressing themselves as they want. It's not about limitation. ... It's about encouraging people to be unique, and accepting of them."

In its fourth year, Veterans Voices aims to give veterans in SLO County an outlet for expression, a place for creativity, and a little bit of art therapy. Veterans and their families can participate free of charge, attending art workshops, creating art, and exhibiting their artwork.

After attending a town hall meeting in Paso Robes about the needs of Central Coast veterans, Brescia wondered what she could do to help. As she looked into some of the issues brought up during the meeting, Brescia said she started realizing just how prevalent mental health issues were among veterans. Then, one of Brescia's friends, a veteran who'd done a few tours in Iraq, spoke with her about how hard it's been to reintegrate back into society.

"He was the one who came and said, 'Deprise, can you do something?'" Brescia said.

Brescia spoke with her mother, who had studied with art therapist and author Lucia Cappachione in Texas in order to teach creative journaling and expressive arts, which is all about "tapping into this other side of the brain for expressive therapy." Cappachione had good success working on a program with veterans in Texas, so they tried it in Paso Robles. Then, "the whole thing kind of took on a life of its own," Brescia said.

Artists from the Paso Robles Arts Association, which Brescia and her mother were both members of, volunteered to mentor vets and help them either realize their own visions or be sort of an interpreter of the veteran's vision.

"It was more of, I would say, a matchmaking thing," she said.

Veterans Voices also had artists who held art workshops in media like glass and pottery that multiple vets and their families could attend. Those first two years, Veterans Voices also held an exhibit showcasing the art at Studios on the Park. Due to the COVID-19 pandemic, the 2019-20 show went virtual, and for 2020-21, Brescia said they had to pivot the programming a little more.

And that's where the butterflies came in.

A grant from the California Arts Council through ARTS Obispo, matched with funds from the Deprise Brescia Art Gallery, enables Veterans Voices to deliver wooden wings and art supplies to veterans throughout the county (or they can pick them up at the gallery) and hold painting workshops via Zoom and in small COVID-19 safe groups at the gallery. Once the veterans and their families are finished, Veterans Voices lacquers the butterflies, puts the wings together, and hangs them in the garden. "It can be very simple, and it doesn't have to be exact. To give somebody that freedom, to make them pretty—some people want to make them exactly like the monarch and some people don't," she said. "Some people just want to try art, and they don't want to be judged by other people. ... It is intimidating to people who haven't tried art, and I wanted to take that away. ... Get rid of that whole, 'Oh, I'm not good enough.'"

Brescia said she looks at it as something uplifting, a sort of unity project, something that the world could really use, especially during the pandemic.

Larry Le Brane—who taught art at community college for 32 years, recently had a one-man show at the Morro Bay Arts Center called On A Whim, and served in South Korea during the Vietnam War—participates in Veterans Voices as both an artist and a glass workshop leader.

"It's an act by Deprise, an act of recognition for all of those who served. It gives us the honor of not being forgotten," Le Brane said. "It's a fellowship or a community that I belong to, and I'm grateful to be a part of it."

In his experience, art is a therapeutic break from life.

"It's a great escape, or a respite, if you will from society in this life. ... It's a way of slowing down, escaping time, spending time," said Le Brane, who focuses on 3D art. "You just escape the everyday world and time passes fast, and I have many students who will come in for a three-hour session, and they can't believe that the time is gone, and they keep coming back for more."

Currently working on three butterflies, Le Brane said he takes on every project as a challenge, a chance for him to do something new. He's using LED lighting, which he's never worked with before, on one of the 4-by-4-foot butterflies. 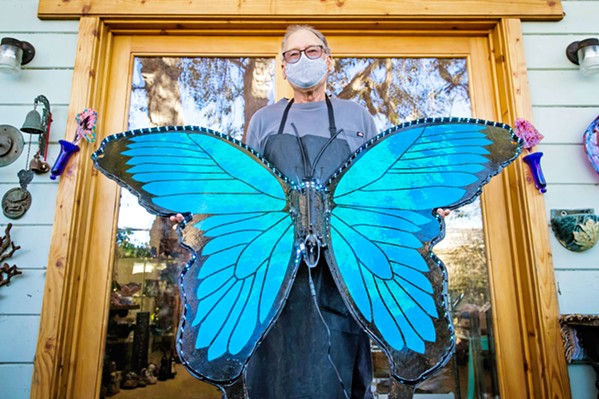 After three months of inspiration, tinkering, and problem-solving, his creations are almost ready to participate in Wings of Change. Le Brane said he hopes to get them to the gallery before the end of the year.

Army reservist Antony Billes participated in a recent Zoom workshop with his three children, and said it's been a really great way for him to bond with his family. Although he's participated in Veterans Voices for a little while now, this year will be the first where one of his pieces (and those of his kids') will be featured in a show.

A year or two ago, his family made some masks together as part of the program, and they're still sitting on a shelf in the house, which Billes said shows a lot about how much his family has appreciated the opportunity to participate in Veterans Voices.

"Any time you can spend with your family is precious, and it really helps when you have someone to guide you through that creative process," Billes said. "And being able to express yourself visually, you get things out of it that you weren't expecting to, which is pretty amazing." Δ