Golden Bear is a winner among Cal fans

It’s always interesting to see what people will do when they want to buy a wine that has special meaning for them. During a charity event in Monterey, Mike Schmidt—whose winery is in Santa Maria—was pouring select varieties from both of his brands, Brucher and Golden Bear. A woman walked up and asked to taste his Golden Bear Chardonnay, but he had to admit he didn’t bring that particular wine to pour at the event. He had, however, brought one bottle of it in a chiller so he could enjoy it when he had dinner that night. 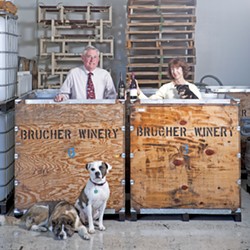 “I decided I would go ahead and open it so she could taste it, and she liked it,” Schmidt recalled. “A few days later, she called to order a case of our Golden Bear Chardonnay. She was a Cal alumnus who said it was urgent that she receive it in time for the first Cal football game of the year. She wanted to share it at a tailgate party and said she’d pay any price to get it shipped to the Bay Area on time. We were able to get it shipped to her without it becoming too costly.”

Mike and his wife and partner Janis Schmidt own and operate the Brucher and Golden Bear wine company in Santa Maria. Both of them have been longtime wine lovers, but they’re somewhat new to the wine business. Formerly from Southern California, the Schmidts met Peter Brucher, the founder of Golden Bear and Brucher wine company, in 1997. He was pouring his wines at the Pine Mountain Festival in their area. They became close friends, and he began staying at their home when traveling there. When the Schmidts moved to Pismo Beach, they volunteered their time to help Brucher with the business and helped pour wines at festivals and special events at the winery.

Brucher wanted to sell the winery, and the Schmidts hoped to gradually buy him out. But the recession in 2008 changed their plans, according to Mike. Early in 2009, he began learning the retail and marketing side of the business while selling Brucher’s brands up and down the state. By August of that year, Brucher hired Janis, hoping that after learning on the job for a year, the couple would buy the business. Formerly an English teacher, she gave up her job at Morro Bay High School to learn to manage a winery. Unfortunately, only two months later illness forced Brucher’s early retirement. He moved to San Diego to be near his family.

Suddenly everything was left in the Schmidts’ hands.

“It was baptism by fire,” Janis remembered. “I jumped in and took over the winemaking and meeting with growers to buy grapes. I’m very detail oriented, and I’m enjoying this new challenge.”

Since she started working with Brucher at the beginning of harvest in 2009, he began to teach her more than bookkeeping: “As Pete started making wine, he took me away from the finances and had me involved in the winemaking process,” she remembered. “I started working with Pete’s cellar guy, running the forklift and punching down vats of grapes.”

While admitting it’s hard work, she loved it. At the time Addamo’s winery was next door, and their winemaker, Justin Mund, loaned Schmidt his winemaking text books.

“I studied and did a lot of research,” she said. “Plus I’m always learning from our winemaking consultant, Jim Yerkes.”

Peter Brucher founded his eponymous brand in 1990 in Santa Maria, but he started in the business nearly two decades earlier. A Cal alumnus who studied law, Brucher moved to Napa Valley in 1972. His wine industry career began in Napa Valley’s Rutherford appellation when he planted 18 acres of Cabernet and Chardonnay. Brucher and partners founded Vichon Winery in 1978, a very successful, large producer of Cabernet and Chardonnay. He sold Vichon’s operating assets to the Robert Mondavi wine company in 1985.

Brucher continued to produce wine under his Golden Bear label in Napa at Honig Cellars, which he discontinued in 1989 but didn’t sell the brand. His Golden Bear label prominently features “Oski,” Cal’s Golden Bear mascot. That year he sold the Vichon estate to the Mondavis. He then relocated to the Central Coast and started his eponymous label in Santa Maria.

As a newcomer to the Central Coast, Brucher wisely hired local experts Steve Rasmussen and Jim Yerkes to make his wines.

“They were both very good winemakers, but they had very different styles,” he said in 1998, when I interviewed him.

Yerkes has been Brucher’s consulting winemaker since the brand’s creation. At the end of last year’s harvest, Schmidt hired an assistant, Patrick “Pat” Mantz, formerly at Fess Parker Winery. The Schmidts’ son Ricky, a professional race car driver in Monterey, is learning wine sales, and he delivers to restaurants and wine shops there. Their tasting room is open Sundays from 11 a.m to 4 p.m., and by appointment only during the rest of the week. You’ll find their wines at shops across SLO County: Avila Wine, Central Coast Wines, Fermentations, Morro Bay Wine Sellers, and Vino Versato.