Glen This well-intentioned dramedy explores the travails and triumphs of adoption, finding both comic and emotionally potent moments. Pete and Ellie are happy in their lives. They flip houses for a living; he does the heavy lifting, and she does the design work. They're successful and fairly well off, and the idea of having kids simply isn't in the picture ... until Ellie's extra competitive sister, Kim (Allyn Rachel), and her put-upon husband, Russ (Tom Segura), put the idea in Ellie's head. Instead of trying to have kids of their own, Pete and Ellie decide to adopt and begin taking parenting courses with Karen (Octavia Spencer) and Sharon (comedian Tig Notaro), who try to prepare prospective parents to first, foster a kid and then, maybe if everything goes right, become a real parent. Originally, the couple meant to adopt one small child but after meeting three siblings in need—including rebellious 15-year-old Lizzy (Isabela Moner)—they suddenly find themselves on a steep learning curve on how to parent three children they've only just met. Based on director Anders and his wife's own experiences with adoption, the film explores the pitfalls of adopting three siblings, including the potato chip-obsessed youngest, Lita (Julianna Gamiz), and accident prone and insecure middle child, Juan (Gustavo Quiroz). The film's full of laughs, mostly at the expense of Pete and Ellie, who are wholly out of their element, in part because Lizzy is smart and manipulative, and she really wants her mom to regain custody of her, Juan, and Lita.

Anna No one wants to take in a teenager. While their younger counterparts are getting placed in homes all the time, foster teens are obviously and wholly overlooked, which strikes Pete and Ellie when they attend a picnic aimed at pairing up parents and kids. When sassy, smart-assy Lizzy catches their eye, the couple is intrigued. Soon enough they learn she comes with a little more than a hefty bag of clothes—little Lita and Juan are adorable handfuls that teen Lizzy has mothered from day one. Things aren't perfect, and while Pete and Ellie can put together a catalog-ready bedroom and fill the bottom of the Christmas tree to the brim, they soon learn that there's a whole lot more that goes into making a family than that. Added to the mix are Pete and Ellie's mothers, two competitive ladies hell bent on earning a World's Best Grandma award, and on the other side of the coin is the kids' complicated relationship with their birth mother. This conflict lives in Lizzie, who has stars in her eyes for her mom despite her mom's past inability to care for her kids. The younger siblings are much warier of the woman who is basically a stranger, but in the end, the foster program wants reunification when possible, and soon Pete and Ellie face the possibility of losing the kids they've grown to love. It all sounds kind of sappy, and maybe it is—but it's the right kind of saccharine, sweet and slapsticky, tender, and relatable. When the credits roll, we get to see real-life families of every persuasion living with and loving each other. Not going to lie, I was pretty tear-bleared after this one.

Glen The two grandmas—Jan (Julie Hagerty) and Grandma Sandy (Margo Martindale)—are both hilarious as they compete for attention from their new grandkids and impart their own mom wisdom on their first-time-parent children. Pete's mom, Sandy, is especially sage, and shows Pete and Ellie how it's done. I also thought Tig Notaro as Sharon was terrific. Her deadpan delivery and polite but strained work relationship with Karen was a subtle comic highlight of the film. Wahlberg and Byrne have great chemistry as Pete and Ellie. They believe most people who adopt have a special depth of empathy, and they worry they don't have it. They're certainly full of self-doubt and discuss how they can back out of the situation. There's something very real about their insecurities. There's also something very sanitized about the story, but, of course, how could a film truly cover all the complexities of adoption in two hours? To add dimension, we see Pete and Ellie attend foster parent support groups, where they interact with other foster parents who discuss their own problems. There's an interracial couple, a gay couple, a single white mom who desperately wants to adopt an athletic black child to guide him to his NCAA potential. You could argue the film resorts to stereotypes and broad strokes, but there's so much emotional potency here. In the closing credits, the first photo of parents and their adopted children is director Sean Anders, his wife, and their three Latino kids who the film is based on, followed by a dozen more photos of other families, presumably ones the Anders met during their foster and adoption process. It drives home that adoption is an important calling that creates new families. This is feel-good filmmaking that will hit you right in your tender parts this holiday season. I found it undeniably sweet and satisfying. 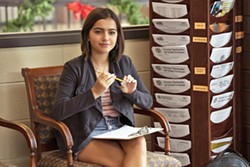 Anna A big selling point for Pete and Ellie is formed when they see Brenda (Eve Harlow) and her adoptive parents, who come speak at one of the support group meetings. It's all inspiration and charm, but when Pete and Ellie turn to her parents in the middle of their own battles, they soon learn that still waters run deep, and picture-perfect families are just fairy tales. The overall message is love; love through the good and love through when you hate each other—choose love every time and you will come out winning. It could be dismissed as a feel-good romp with more stars than substance, but I think this one has more going for it than meets the eye. It really feels like it comes from a genuine place, and learning that it's based on the director's life experience solidified its wholehearted loveliness. The win in this one falls squarely between how sweet and how funny it is. Poor klutzy, apologetic Juan is too sensitive; his sister, Lita, is a tyrant of cute; and big sis Lizzie is an exasperated mother hen who desperately wants the chance to be a teen just like everyone else. This will make you want to hug those you love tight, and strangle them just the same. Ah, family. Δ