The Instinctive Curiosity, Intentional Connection art show, featuring the mobile photography of Vanessa Veiock, will be on display at Linnaea's Cafe throughout the month of July with an opening reception during Art After Dark on July 5 from 6 to 9 p.m.

Vanessa Veiock is a photographer with two expensive Nikon cameras gathering dust on a shelf. But she still takes photos, every day, just on her iPhone now.

The switch began a few years back, when Veiock took a year off to do some traveling, taking just a backpack with her.

"I had this inner debate," she said. "I had a really nice Nikon camera and an iPhone. I came to the conclusion that I didn't want to take something I was going to worry about. I was traveling to be free."

Veiock's first exhibition in 2015 featured iPhone photographs from more than 30 countries, linked together by small idiosyncrasies, encouraging viewers to get curious about the themes of interconnectedness and also make shareable personal connections to one another.

Veiock, who just relocated to San Luis Obispo from the East Coast in July, now has another exhibit, Instinctive Curiosity, Intentional Connection, featuring her mobile photography, on display at Linnaea's Cafe in downtown SLO.

As a new mom, Veiock most often takes photos when she's out for runs in SLO, with her young son in tow. She uses her trusty iPhone 8 when she feels moved to stop and take a photo of scenic locales like the cliffs at Pismo Beach or at Terrace Hill. She usually doesn't edit her photos unless it's to adjust the brightness or contrast in the iPhone's Photo app or in Instagram's editing app.

"I wanted to find beautiful things and I wanted my photos to be accessible," Veiock said. "With how much Instagram has exploded, it left me wondering, what's the point of a photograph anymore?" 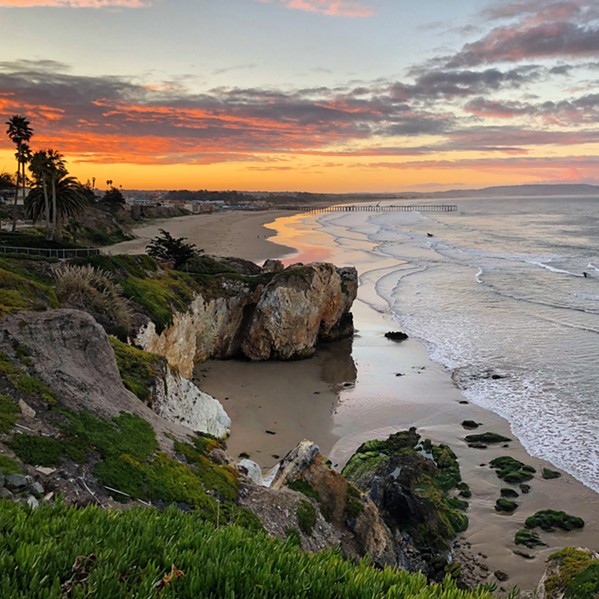 Through this exhibit, Veiock is looking to explore questions like: What gives a photograph power, purpose, or significance? And: How can we use technology, and furthermore, digital photography, to fuel more connection rather than isolation? She's also interested in making art a collaborative, community experience, which is why Instinctive Curiosity, Intentional Connection was crowd funded, with a different sponsor covering the printing costs of each photo for the show. Proceeds from art sold will go to Princeton philosopher Peter Singer's The Life You Can Save, which aims to motivate the public to give to organizations that do the most good per dollar.

"Everybody expects everything for free now," Veiock said of art. "But it takes value away from everything. It was this idea of connecting with other people and getting a conversation going about what art they value." Δ

Arts Writer Ryah Cooley is taking a selfie while hiking with her pit bulls. Contact her at rcooley@newtimesslo.com.