If you’re looking for an artist with an ass-load of street cred, look no further than Henry Rollins. The former Black Flag frontman is as authentic as they come, a rip-roaring, take-no-prisoners, in-your-face performer whose spoken word rants are cutting to the core yet surprisingly funny and self-deprecating. 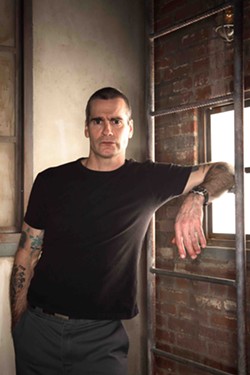 The musician, actor, and activist brings his politics and sense of humor to bear during Frequent Flyers Tour, a spoken word event at Downtown Brew this Sunday, June 6 (8 p.m.; all ages; $24 presale or $25 at the door).

For many observers, Rollins remains an enigma. As a punk rock and hardcore artist, he’s a screaming, aggressive performer with a restless and relentless intensity. As an actor, he can be funny or scarily focused. He’s got a recurring role as a white supremacist on the TV series Sons of Anarchy, yet in his personal life as an activist he’s campaigned for human rights, promoting marriage equality for LGBT couples. He’s also involved with World Hunger Relief and has entertained our troops overseas as part of United Service Organizations. He’s surprisingly mellow and relaxed as a spoken word performer, coming off more as a standup comedian. If you’ve never heard him, here’s your chance.

Downtown Brew’s got plenty of music this week, too. On Thursday, June 3, check out emo-pop-rockers Cute is What We Aim For (6:30 p.m.; all ages; $12 presale or $13 at the door). Hailing from Buffalo, NY, the five-year-old band features vocalist Shaant Hacikyan, guitarist/pianist Jeff Czum, drummer Tom Falcone, and bassist/guitarist Fred Cimato, whose handful of demos quickly got them signed by Fueled by Ramen.

World and groove rock artist Rey Fresco returns to the club on Friday, June 4 with Natural Incense opening (7:30 p.m.; all ages; $8 presale or $10 at the door). Rey Fresco performs the traditional music of Veracruz (Son Jarocho), utilizing a 36-string harp as a lead instrument.

On Wednesday, June 9, punk rock heroes Subhumans hit the stage with opening act Cross Stitched Eyes (7:30 p.m.; all ages; $12). It’s hard to believe U.K.-based punk act Subhumans has been at it since 1980, nearly as long as The Clash.

Merrell Fankhauser has lived the rock’n’roll lifestyle since the ‘60s, penning the surf rock classic “Wipe Out!” and fronting such iconic bands as psychedelic rockers Fapardokly, HMS Bounty, Fankhauser-Cassidy Band, and MU. It seems like every time a record company decides to put out a collection of ‘60s and ‘70s songs, they tap Fankhauser. He’s a living legend, and he lives in Arroyo Grande! 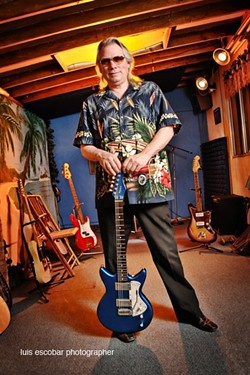 This Friday, June 4, from 8 to 10 p.m. in the SLO Grange Hall (2880 Broad St.; $15 at the door), Merrell Fankhauser & Friends will present an evening of nostalgic rock tunes, and most interesting of all, Merrell tapped his old friend and band mate, 87-year-old Ed Cassidy, a member of the famed group Spirit.

“Cass will be on hand to meet and greet after the show and take pictures and sign autographs, a chance to meet this legendary ‘60s icon and bring those old Spirit albums for a signature,” said Merrell. “A nice tribute to the oldest rock’n’roll drummer in the world!”
Jay Furguson of Spirit and Jo Jo Gunne will also be there, plus many other surprise ‘60s and ‘70s musicians. This will really be a night to remember.

Wake up to Sleepy

Sleepy Guitar Johnson (aka—Denis Degher) is about to release his fifth album, a gritty collection of rootsy Americana tunes guided by his comfortable voice. Called Cowboy Blues, the recording is the culmination of all he’s learned about songwriting and recording over the years.

Born on the banks of Lake Erie, Degher cut his teeth in the “take no prisoners” Hollywood scene. Today he lives a quieter existence on his organic vineyard, where he produces his own brand of alt-country blues and award-winning wines.

Degher learned guitar from his father when he was 12, and soon after became “a guitar-carrying vagabond writing songs from Morocco to the San Francisco Bay,” he said, eventually landing in L.A. and working cutting disks at Studio 76 on Sunset Strip so he could record his own demos. Shortly thereafter he developed into a well-known producer/engineer and segued into the artist/owner of Red Zone Studios in Burbank and Santa Monica.

Check him out when he and his band—bassist John Morris, guitarist Dave Richter, and drummer Darrell Voss—play an 8 p.m. show at Paso’s Vinoteca Bar this Saturday, June 5. Buy a bottle of his MOJO wine and get a free CD!

These days, there simply aren’t performers that seem as cool and make performing look as effortless as Frank Sinatra and Dean Martin. Those two crooners were the kings of cool—slick, talented, self-deprecating, and dead sexy. 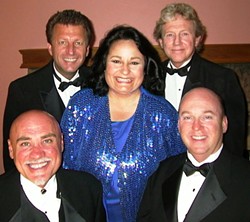 Franks & Deans, a musical a tribute to these cool cats, returns to SLO Town for a great Sunday afternoon of entertainment Sunday, June 6, at 3 p.m. in the Grange Hall (2880 Broad St.). $10 at the door.

Expect a cabaret style performance reminiscent of the Las Vegas shows the Rat Pack did in the ‘60s. The cast does a tribute to, not an imitation of, these fine performers, with plenty of impromptu comedy on stage. Audience participation is not only welcomed, it’s expected. Sing along to “Fly Me To the Moon,” “Everybody Loves Somebody,” “The Lady is a Tramp,” “Volare,” “Luck be a Lady,” “My Way,” “That’s Amore,” and more.

You’ll hear such acts as the Chicago Blues Reunion, The Dynamites, and Rickie Lee Jones! You’ll listen to more genres than you can shake a stick at: folk, country, western, swing, gypsy-jazz, Afro-Celtic, blues, soul, and Latin-rhythms.

It all happens at Live Oak Camp, nestled in pristine wilderness only minutes from Santa Barbara near Lake Cachuma. Visit liveoakfest.org for a full schedule and to order online, or call 781-3030 to order by phone. Full festival camping tickets are $115 for adults; $75 for teens; $35 for children. Vehicle parking passes are also required. Day passes are available as well.

On Friday, June 4, at 7 p.m., the San Miguel Mission will be filled with the sounds of the St. Petersburg Men’s Ensemble, who will present a concert of Russian Orthodox sacred music and Russian folk songs. A goodwill offering is requested, and CDs and Russian souvenirs will be available for purchase. The following day, on Saturday, June 5, Matt’s Music School and Stage will present the ensemble at 7:30 p.m. ($15; 237-0054).

On Saturday, June 5, Pulp will be drawing people to the dance floor with some original and classic tunes ranging from Tina Turner, Rolling Stones, Black Crows, and more, from 3 to 6 p.m. at Morro Bay’s Fuel Dock. Get your fill of rock’n’roll and rhythm & blues—all geared for dancing!

The Red Barn Community Music Series presents retro gypsy-jazz swing act the Red Skunk Jipzee Swing Band on Saturday, June 5 at the Red Barn at South Bay Community Park in Los Osos (6 p.m. potluck supper; the 7 p.m. concert is $10 at the door). Though helmed by young kids, the group draws its sound from Django Reinhardt, ‘30s European jazz, and American roots traditions. These kids are spunky and super fun, with two albums under their belts. 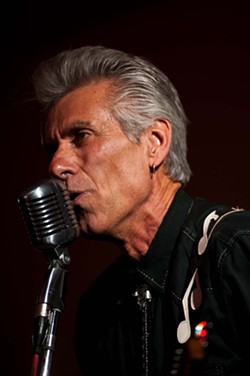 Take It SLO, Cal Poly’s a cappella ensemble, presents its annual Spring Concert at 6 p.m. Saturday, June 5, in Chumash Auditorium on campus. “The 15-member vocal ensemble will premiere the students’ many new arrangements of hits by artists such as OneRepublic, Beyonce, and Lady Gaga, in addition to some of its audience favorites,” according to the Cal Poly Music Department. “Though this band of vivacious musicians is a versatile assemblage of future rocket scientists, CEOs, and philosophers, the members share a love for music and an infatuation with having a good time,” said Take It SLO President Amy Lebetasamer. “Fifteen voices, one beat, heaps of energy, and a strive for soul might make you hear the voices of hip hoppin’, pop-rockin’ angels.” Tickets are $5 for students with a Cal Poly ID or $7 for general admission. A discount of $2 will be given to those who wear a Take It SLO fan T-shirt. Doors open at 5:30 p.m. Seating is unreserved.

The Walt Disney Concert Hall will soon be filled with the sounds of The Cal Poly Wind Ensemble, but before they head to Los Angeles, they’ll perform the concert for locals on Saturday, June 5, at 8 p.m. in Sidney Harman Hall in the Christopher Cohan Performing Arts Center. This also marks the final on-campus performance to be led by its conductor, William Johnson, who will retire from Cal Poly at the end of spring quarter after 43 years. You’ll hear Johann Sebastian Bach’s “Fantasia in G Major,” Samuel R. Hazo’s “Exultate,” Percy Grainger’s “Molly on the Shore,” and Norman Dello Joio’s “Scenes from the Louvre.” Guest soloists include W. Terrence Spiller, performing Kamilló Lendvay’s “Concertino for Piano, Winds and Percussion,” and John Astaire performing Joseph Schwantner’s “Concerto for Percussion.” Spiller is a classical pianist and chair of the Cal Poly Music Department. Astaire is a Cal Poly graduate completing his doctorate in percussion performance at Indiana University. Tickets are $8 to $19 (756-2787).

Tony “Tarzan” Balbinot will guide his band the Cadillac Angels through their paces this Saturday, June 5 at 5:30 p.m. during the free Morro Bay Music Festival. “We just finished a spot in a major feature film entitled Queen’s of Country,” said Tony. “It’s a comedy and we performed two songs in a live segment in the film with Wanda Jackson, shot on location in Cave Creek, AZ. It was a blast.” Expect to hear some rockabilly, roots, surf, and more. They’ll appear again on Sunday, June 6, from 3 to 6 p.m., at the Ramona Garden Park in Grover Beach.

On Sunday, June 6, jazz guitarist Frank Potenza and his trio will be the next attraction at the Famous Jazz Artist Series at the Hamlet in Cambria. In addition to his own groups, Potenza has performed with the likes of Dizzy Gillespie and Brother Jack McDuff. Currently on the Capri label, his latest recording is Something Old, New, Borrowed, and Blue. Bassist Luther Hughes and drummer Steve Barnes, as well as series co-producers Charlie and Sandi Shoemake, will offer support. There’s a 4 p.m. show for $15, a 7:15 p.m. show for $12, or see both for $20. Reservations are recommended: 927-0567.

This Sunday, June 6, in Cal Poly’s Spanos Theatre, prepare to be transported to the Middle East when the Cal Poly Arab Music Ensemble performs traditional and contemporary music and dance from the Eastern Mediterranean and larger Middle East starting at 7 p.m. According to a Cal Poly Music Department press release, “The ensemble will perform vocal and instrumental selections by some of the most popular composers and performers of Arab art and popular music, including the eminent Mohammad Abdel Wahhab and the superstar Amr Diab from Egypt, as well as the legendary trio of Fairouz and the Rahbani Brothers from Lebanon.” The 35-member ensemble is under the direction of faculty member Kenneth S. Habib, a composer and performer whose doctorate is in ethnomusicology with specializations in Middle East and American popular music. Tickets are $10 for the public and $8 for seniors and students (756-2787). 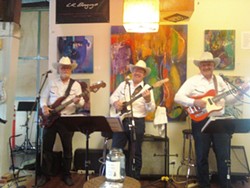 Julie London down at the SLO Down Pub is pumped up! “We have a new genre at the SLO Down Pub, a local country band!” she gushed. “They attract a group of line dancers wherever they play! We’ve had them on two Sundays so far, and they’ll be trying out a Monday evening.” Solomon Creek, a trio together for the last five years, features Chuck Williams (lead vocals and rhythm guitar), Ray Ward (lead guitar and vocals), and Jeff Cardinal (bass and vocals). Hear them Monday, June 7 from 5 to 8 p.m. They also play the third Sunday of the month from noon to 3 p.m. If you’re a fan of Merle Haggard, George Strait, Alan Jackson, Johnny Cash, Toby Keith, and Brooks & Dunn, check ’em out! ∆

Glen Starkey is going to Live Oak. Are you? Contact him at gstarkey@newtimesslo.com.