From the moment a newly-freed slave embraces a wounded Confederate soldier and utters a line in Hebrew, it’s clear The Whipping Man is not the typical Civil War drama. 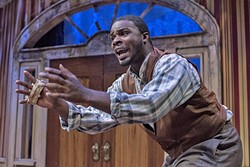 Ostensibly about the days immediately following the end of the Civil War, the play touches on issues of self-delusion, and the lies we not only tell each other, but ourselves. Set in April of 1865, the play centers on two newly freed slaves, who were owned by a Jewish family, and their former master. The Whipping Man starts in the gloomy interior of a decayed and bombed out mansion, as Caleb DeLeon (Matt Koenig) crawls in the door, badly injured and seeking help. This is his home; he returns to find his family gone and only Simon (Derrick Lee Weeden) living in the house. Simon greets his now-former master with comfort and relief, insisting that the severely injured Caleb go to the hospital for his injury. But Caleb refuses to go to the federal hospital, setting up one of several intertwined mysteries that slowly unfold throughout the performance.

Another freed slave, John (Antwon D. Mason Jr.)—who was also owned by the DeLeon family—shows up with precious goods “discovered” (John’s word to excuse his theft) at other fallen mansions around town. Both Simon and John, who were raised in the house, are practicing Jews (the inference here is that they took or were forced to take the religion of their master). John has managed to keep track of the date (through another “discovered” item) and Simon realizes that it’s Passover and decides to perform a seder. 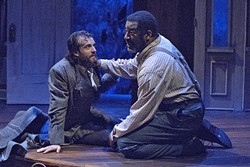 There are also moments of true levity, which help to break up the darkness of the subject but also serve to show the desperation to find anything salvageable among the reminder of the most horrific part of our past. The entire play is a demonstration of humans making excuses for their brutality, their selfishness, their hatred, their cowardice; while Caleb rationalizes his actions both on and off the battlefield, John rationalizes lying to Simon, and Simon rationalizes a grotesque procedure on Caleb. This morality bargaining set against the backdrop of Passover, a time for Jewish people to reflect on their own freedom from slavery thousands of years ago, makes the story all the more stark and haunting.

The gangrene slowly creeping its way up Caleb’s body and destroying him is an apt metaphor for the destructive poison of his (and John’s) lies, echoed in the crumbling set around them. What Simon and John have to do to save Caleb’s life creates a scene in the first act that is so alarmingly real, people in the theater actually covered their eyes. That is a testament to the strength of the acting; not a single drop of fake blood is even seen on Caleb, or any gory, mutilated body parts. We react because they act, and that is an impressive achievement.

In a tight, more than two-hour two-act drama carried out by three people, it is necessary for the acting to be as riveting as the dialogue, and in this, The Whipping Man delivers. Mason and Koenig handle the brutality of their relationship with elegant depth. Weeden is a true star; his presence on the stage is powerful in every muted nuance of his physicality. One look at Weeden’s impressive repertoire of Shakespearean roles and it’s no surprise that he dominates in this character. From a restrained smile to an uninhibited outburst of pure heartbreaking rage, Weeden embodies every ounce of Simon, as if he were a living ghost shouting down the demons of our collective past. His is a beautiful and engrossing performance.

In performances like this, there is a danger of dialogue veering into ham-fisted territory, but the actors and the directors seem to know just when to pull it back. One of the other dangers is that the dialogue could become too preachy, and in a play that features an actual Seder performed by newly freed slaves, I was expecting a good amount of sermonizing. But that never happened; every time you think Lopez’s work is about to go into pulpit territory he pulls the story into another direction.

This was the first play I’ve seen at PCPA, and—no exaggeration—it completely astounded me. From the inspired directing and clever stage blocking (it’s hard to fake an amputation on stage) to the engrossing performances, this is a perfect introduction to PCPA and their artistry. If you plan on going, prepare yourself for the intensity. Being mere feet away from a black man in 2017 talking about the long-reaching pain of oppression and slavery isn’t just another typical day at the theater.

Arts and Lifestyle Writer Rebecca Rose from New Times' sister paper to the south always wanted a career on the stage. Contact her at rrose@santamariasun.com.