Interview with a chief

Dec. 18 was an emotional evening in Santa Maria, at least for the 100-plus people crammed into City Council chambers on South McClelland Street. After a turbulent year that included eight officer-involved shootings, lawsuits, and the retirement of longtime Police Chief Dan Macagni, the city finally got a new leader in retired Los Angeles Sheriff’s Department Commander Ralph Martin. 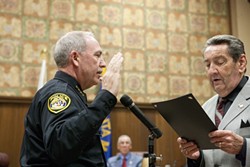 Martin, who’s served as interim chief since August, has an extensive background in gang-related and community-based policing, as well as internal affairs.

At the City Council meeting, Santa Maria City Manager Rick Haydon said he believes Martin will be able to build bridges in our community.

Two days after the swearing in, New Times’ sister paper sat down with Martin to ask him about his plans for the Santa Maria Police Department. Because of the national focus on the department, and the new chief’s thoughts on transparency and welcoming outside ideas and applicants, New Times is presenting a portion of the Sun’s story on the chief:

SUN When you came in as interim police chief in August, I’m sure you were aware of the problems the city was having—

MARTIN You know, I really wasn’t. I knew of the Covarrubias shooting. I was aware of it when I was down in L.A., but I really didn’t know any circumstances about it. If you would have asked me which city it was in, I probably couldn’t tell you. I just knew it was a Central Coast city.

SUN So they didn’t mention that [in the hiring process]?

MARTIN No, what happened was the city manager was looking for someone to serve as interim, and my name had come up from several people down in L.A. Mr. Haydon contacted me and we talked for a while. I eventually told him I would come up for the interim job.

SUN We at the Sun have reported on the police department extensively. So from your perspective, coming in as an objective party, can you tell me more about some of the department’s issues?

MARTIN First, just to let you know, I have extensive background in officer-involved shootings. [While working for the Los Angeles County Sheriff’s Department] either my partner or I, in a five-year period, responded to 118 of them. That’s one officer-involved shooting every two weeks for five years. Either my partner or I was the senior person on the scene. So I have been to an awful lot of scenes. So, given that, I think Mr. Haydon probably realized I was someone who could look [at the shootings] objectively. It started in December of 2011 with the Agnes [Street] shooting where Sammy Ceballos was killed. He was an armed suspect. Unfortunately, two of our officers were also hit. The District Attorney has looked at these cases and deemed them to be justifiable in a criminal sense, but I’m looking at them in a tactical and administrative policy sense. They’re two completely separate things.

SUN There are still quite a few people in this town who do not trust the police and who don’t feel safe. As police chief, what would you like them to know?

MARTIN ... There are two areas that police are usually gauged by: How well they handle crime and public trust. Public trust can be gauged and evaluated through the process of sending out several hundred questionnaires. That’s something I plan on doing next year. ... We’re going to spread these questionnaires around a number of areas. We’re going to give them to teachers, deputy public defenders, the DA’s office, businesspeople, students, and we’re also going to give them to people we’ve arrested. Now that’s kind of an eyebrow raiser in some ways, but we don’t know how effective we are ... unless we get people to respond to these questions. We did this many years ago down in L.A. and we came to understand that there were several areas in which we were deficient. That’s why we started town hall meetings and more community-based policing.

SUN What is your stance on transparency in policing? That became an issue under Chief Macagni. As a member of the media, I found him very difficult to get a hold of. I was surprised that you answered your phone on the second ring the other day.

MARTIN Well, that’s part of it—I answer my own [office] phone, and I answer my own cell phone. ... I went to the town hall meeting on Oct. 11 and I got up and went into great detail—without naming names—about all of the 10 or 12 major crimes that have occurred in the last 12 months, including the Covarrubias shooting and the other officer-involved shootings. That was videotaped. ... That should have been an indication that I’m pretty transparent and I’m going to be upfront. ... Everyone in the department who’s at the scene is encouraged to speak to the press. In other words, we’re not just going to wait for the [public information officer] to show up. I’m encouraging everyone to be open. And, quite honestly, they make better spokespersons anyway because they’re the ones handling the scene. … I was a PIO in Los Angeles for three years.

SUN You’ve done a lot of things in your career. What are some other key experiences?

MARTIN I worked closely with the FBI and I went to Central America. I spent time in El Salvador, so I’m pretty up to speed on the MS 13 gang and 18th Street gang. My specialty when I worked as a gang investigator was Bloods and Cripps down in south Los Angeles.

SUN Why do you think gangs are attracted to Santa Maria?

MARTIN Well, the gang members we have here—we’ve got about 1,200 gang members—are just generational. I think a lot of them are second and third generation. … It’s interesting here because you can have different gangs living on the same street. That doesn’t happen in L.A. I could draw lines on a street map through Compton and tell you which gangs are where. It’s different here.

SUN I wonder why that is?

MARTIN I don’t think there’s the same level of violence here. There’s not as great of a territorial mandate as down in L.A. … They’re criminals and they’re violent, but not as violent as in other areas. I mean, let’s face it, we’ve had two homicides this year [in Santa Maria]. Both of them were domestic.

SUN To put it bluntly, what about the idea of blaming Mexicans for all of the gang violence?

SUN What about internally in the police department? There were some questions raised by members of the police officers’ association about racism and cronyism within the department. Have you had to deal with any fallout from that?

MARTIN I think every organization has nepotism to a degree. What I’ve done is open up the promotional process to all members and to all outside agencies [across the state of California]. So if somebody wants to be a lieutenant in the Santa Maria Police Department and they currently work in Santa Barbara, they can apply here.

SUN What was the department’s reaction to that?

MARTIN They’re fine with it. … We have a very young department here so it’s important to have mature leadership, people to come in and mentor. I’m a big believer in mentoring. I want to leave the department in better hands than I found it.