Left Field prides itself on offering an extensive mélange of plants and novelty curios to the people of San Luis Obispo. Spiny succulents, prismatic objets d’art, and terra cotta earthenware are just a few of the bric-a-brac that can be found clustered together in the store.

But just to the left of the entrance and past the wickerwork baskets and the crystal geodes is another doorway, opening up to a small but brightly lit room used as a gallery space. 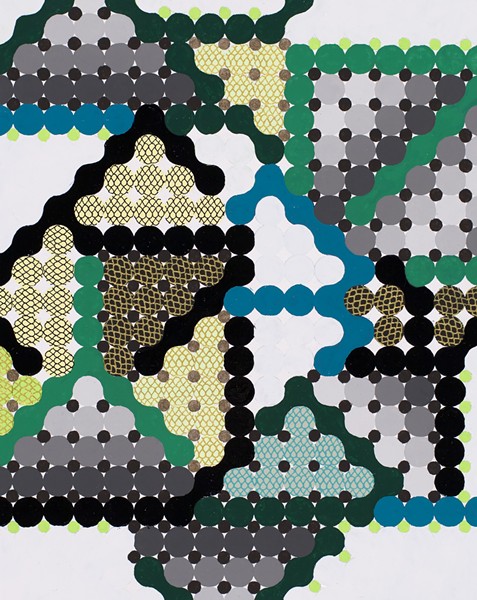 Nick Wilkinson, the owner of Left Field, studied art and painting while he was in college. Originally, the small room in the back of the shop was dedicated to storage, but Wilkinson decided to use it to feature artists from all over the country in small, personal shows.

Now, Left Field is presenting its second exhibit, titled Intimate Jest. The exhibit will showcase the works of Caroline Larsen, Leif Low-Beer, Josh Reames, Geoffrey Todd Smith, and Scott Wolniak. Wilkinson said that this is the first show that will begin to focus in on the connections between artists.

“It also begins our attempt at putting together a dialogue that we can build on with future exhibitions,” Wilkinson told New Times. “We hope to dig a little deeper and present artists whose connections aren’t surface based and that the audience will have to do a little work to find said connections.”

The title of the exhibit—which artist Geoffrey Todd Smith came up with—is a reference to the massive, 1,000-page novel Infinite Jest, written by David Foster Wallace.

“The title was something we felt had a nice, light touch,” Wilkinson said. “It isn’t too funny, and it plays up the handmade intimacy of the artists. All of the artists in the show are very process-based artists, which means the making of the work is often at the forefront of what drives them. They all come from different places of inspiration, and make marks in different ways, but bottom line: They are all about process.”

One of these artists is Caroline Larsen, a Canadian-born, Brooklyn-based artist, who has a rather unusual process. At first glance, the image of a house enveloped by palm trees and succulents seems to be woven into a tapestry with brightly colored yarn. On closer inspection however, one can see that it’s actually composed of thick layers of oil paint, painstakingly applied to the canvas to form a textured, lattice-like array that create a cohesive image.

“I usually take a month to plan a painting,” Larsen said. “The painting is a stand-in for the idea or feeling, so I like to start with a strong thought foundation. I do Internet searches and observational research, gathering images, color ideas, and general sensibility of what I am going to paint. Inspiration for my paintings comes from my day-to-day experiences. I try to go out and see a lot of art, and I Iove looking at textiles and patterns.”

Geoffrey Todd Smith, a Chicago-based artist, has a more traditional methodology that he uses to create just as unique a final product. Using enamel and gouache paints with gel pens, Smith creates paintings made up of a series of colorful circles that are arranged in a rigid, grid-like format. The effect is a highly structured, yet chaotic piece of work that enables the onlooker to create a sense of order from the dissonance.

Smith was inspired to juxtapose the structural with the colorfully chaotic seven years ago, when he was stricken with a migraine that impaired his vision. Since then, he has been fascinated with order and disorder. He begins a painting with a vague idea of what he wants it to look like and creates a grid of dots to establish a general color scheme.

“As the image starts to present itself, good or bad, I make layered decisions that either break apart, transform, or assert the image, depending on whether I like it,” Smith said. “Eventually, I settle on a direction and make it as flashy as I can.”

Smith doesn’t consider himself purely a painter, and more often than not, his work is a blend of drawing and painting methods. Using personal memories and experiences, he integrates them into his unique works to evoke an emotion or mood.

“My work is simultaneously a personal and shared experience,” Smith said. “I want the audience to have a strong visual sense that gives them a mysterious feeling of familiarity.”

Intern Adriana Catanzarite is really good at finger painting. Send her some paint via Arts Editor Jessica Peña at jpena@newtimesslo.com.