Local libraries ask community members to look to the future 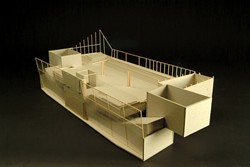 # Just how relevant are libraries? Sure, more than half of San Luis Obispo County residents possess a library card, but advances in information storage and retrieval have raised questions about whether libraries of the future will even exist. And, if they do, will they carry books?

The notion that a computer could replace a book, that a flat, soulless screen could supplant the heft and texture of an honest-to-God tome, is enough to fill any bibliophile--including San Luis Obispo City-County Library Director Brian Reynolds--with horror.

San Luis Obispo County libraries are combating that book-less future, and locals are invited to join the effort by participating in a series of community meetings designed to shape and set in motion a long-term vision for these centers of literacy and information.

The series kicked off in November with a Great Expectations Summit, a daylong event that gave everyday library users the opportunity to discuss what they liked and disliked about the current system, and how they hoped libraries would change in the future. Volunteers recorded attendees' comments throughout the day, and the various responses have since been compiled into what Reynolds calls "a big, fat document with a lot of blanks to fill in."

If those blanks didn't tip you off, the process isn't over. Throughout January, February, and March, the SLO City Library and the Foundation for San Luis Obispo County Public Libraries will be sponsoring even more community meetings.

Reynolds, who has been working in libraries since the '60s, may have more of an investment in the future of county libraries than most. Still, an everyday SLO County resident can find something to gain from these spaces. For the homeless, it's a haven, a place where they can safely spend the day--provided they obey library rules. For children, it's a place to discover a world of books and to learn to exercise their imagination.

"We think there's a role for libraries as physical places to learn about your community," Reynolds said. "We think of library staff and programs as helping people deal with information overload. We're not trying to sell you anything. We're free because we're paid for by your taxes. We have no commercial or political agenda. We're a place that's safe and virtually free. You could spend every day in here becoming a homegrown rocket scientist."

The idea for the discussion series actually came from a politician--2nd District County Supervisor Bruce Gibson--who suggested last spring that the libraries host a summit meeting. In addition to developing a community investment in libraries, Gibson was interested in involving the county's students who might one day be charged with designing the libraries of the future. He contacted the Cal Poly Architecture Department, seeking people interested in participating in the summit series.

Coincidentally, lecturer Eric Nulman was scheduled to teach a class titled "Archives, Networks, and Territories: A New Library for the Information Age." The class was offered to students who were about halfway through Cal Poly's five-year architecture program. Nulman designed the class so that students would have the opportunity to examine networks and the ways the digital revolution has altered the process of gathering and disseminating information. For the culmination of the class, each of the 19 students created a model based on his or her vision of what a library located in Terminal A of the Dallas-Fort Worth airport would look like. 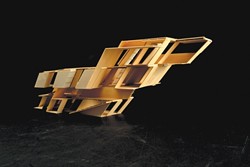 # On Jan. 28, the students will exhibit the models they created during fall quarter. This will be the public's only opportunity to view the models, and the SLO City Library is making every possible effort to create a welcoming environment, from inviting an a cappella jazz trio to serving wine and cheese.

Laura Male is one of the 19 students who will present a model at the Libraries of the Future exhibit. Her parents worked from 8 a.m. to 6 p.m. when she was a child, and she would spend several hours each day after school in a library.

"I was looking to create a relaxed community center," she said of her model. "My initial concept definitely involved people of different backgrounds and perspectives interacting. It's one of those rare community spaces that is pretty safe."

As for the challenge of designing a library within a very specific environment, Male acknowledged that it forced her to consider the nature of airport communities, how a person with a flight delay of a couple of hours might best use the time, and the fact that people probably wouldn't be able to check out a book if they're just passing through. She ultimately concluded that her library would put additional emphasis on digital information, and would be equipped with plenty of computers for travelers who wanted quick access to information while waiting for their flights. But did Male want to do away with books altogether?

"I still think that people should be able to access books, because sitting at a computer screen for a couple of hours isn't pleasant," she said.

Fellow architecture student Hochung Kim also spent a significant amount of time in libraries as a child, though as household computers became more prominent, he turned to the Internet as his source of information. Perhaps as a result of this shift, he also emphasized easily accessible technology in his model.

Kim derived inspiration for his library from Louis Kahn's Phillips Exeter Academy Library in New Hampshire, which was completed in 1972 and received the Twenty-Five Year Award from the American Institute of Architects.

"I really concentrated on the interior, on how people would feel inside the space," Kim explained. "The library becomes this tunnel, where people go in without ever realizing it's a library. It just becomes a passage to their gateway."

For Kim, and all the students, part of the challenge of creating this library was integrating it into an existing space. Not only did the library need to be functional specifically to travelers, but Kim's aesthetic had to work within that of an existing building.

"Maybe I'll have a chance to build a library in the future, but it won't be the type of library we're thinking of," Kim concluded, emphasizing the underlying point behind the summit meetings.

While the students were thinking about the value and purpose of libraries, Reynolds was doing the same, though his ruminations about the library of the future didn't conclude in a 3-D model.

"Twenty years from now, I think libraries will exist as community centers where you can borrow a book, [and] take a class using a variety of media. I would like us to be friendly and engaging to young people. We might offer computer gaming tournaments and hope they might check out a book on gaming theory. But I hope that we're open--and have a budget," he concluded.

This apparently pessimistic conclusion isn't born of mere speculation. For two years, the San Luis Obispo City Library has been closed on Mondays, and the library's limited hours are among locals' chief complaints. Reynolds explained that the library just doesn't have the necessary budget for staff during additional hours. And given the current status of the state budget, it looks like more cuts are on the way. But library friends, patrons, and staff members aren't going down without a fight.

"We can turn this grain of sand into a pearl, which is what oysters do," Reynolds concluded. "And I like oysters."

INFOBOX: Meet models you won't be tempted to force-feed

"Libraries of the Future" will take place on Jan. 28 from 5 to 7 p.m. at the SLO City Library community room. Nineteen students from Cal Poly's Architecture Department will showcase their models of future libraries. An a cappella jazz trio will perform, and wine and cheese will be served. The event is free to the public.

Arts Editor Ashley Schwellenbach has climbed many a tree with a book in hand. Send book recommendations to aschwellenbach@newtimesslo.com.