Investigators are still searching for answers as to exactly what caused a large-scale riot that killed one inmate and injured several others at the California Men's Colony (CMC) Sept. 24.

Lt. Monica Ayon, a CMC spokesperson, told New Times that the investigation into the riot, which involved more than 160 inmates, was ongoing, with hundreds of inmates being interviewed to determine what caused the incident. 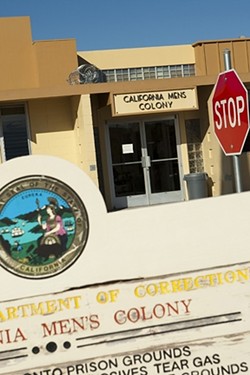 The riot broke out just after 10 a.m. in the medium security custody yard at the state-run prison. CMC staff reportedly quelled the riot using less-than-lethal ammunition and chemical agents. No prison staff members were injured, but multiple inmates suffered stab wounds. Nine inmates were transported to an outside hospital.

One of those nine inmates, 25-year-old Matthew Cook, died from the injuries he sustained during the riot. Cook was serving a 13-year prison sentence for multiple counts of first-degree burglary out of San Joaquin County, according to officials from the California Department of Corrections and Rehabilitation. Ayon said investigators were trying to find out who killed Cook, and did not release the names of any suspects.

While officials continue to work to determine the cause of the riot and the identity of the person or persons responsible for Cook's death and the other inmate injuries, the prison has been put on a "modified program" for an indeterminate period of time. The modified program is less strict than a full lockdown, but still restricts inmate movement within the facility.