An investigation into allegations of misconduct against Arroyo Grande Mayor Jim Hill has finally come to a conclusion, though the results are unlikely to sway the opinions of Hill's most ardent supporters or his fiercest critics.

The investigation's findings, detailed in a 102-page report, were mixed, with some allegations confirmed while others were debunked or unsubstantiated. 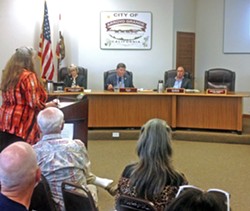 The investigation began after a member of the public accused Hill of misconduct at a January City Council meeting. The South SLO County Sanitation District, where Hill serves as one of three board members, joined Arroyo Grande in the investigation. Both entities hired the law firm of Liebert Cassidy Whitmore to conduct the investigation

Of the eight allegations raised in the report, the investigation found that four of them were sustained, while two others lacked sufficient evidence, and two others were unfounded.

The report found that Hill disclosed confidential personnel matters as well as privileged attorney-client information and documents to third parties in his role as a member of the sanitation district's board of directors.

The report also indicated that there was sufficient evidence to show that Hill overstepped the bounds of his role as a mayor and a sanitation district board member. As evidence, the report pointed to Hill's February 2016 letter sent to the Federal Trade Commission without the knowledge of fellow councilmembers, in which he identified himself as the city's mayor and discussed bringing in a grocery store in Arroyo Grande to replace one that had closed. Hill's letter mentioned Spencer's Fresh Market, a store owned by one of his campaign's supporters.

The report also stated that Hill acted outside his authority as a member of the sanitation district board by inserting himself into personnel matters that were supposed to fall under the purview of administrative staff. In emails regarding a complaint made against a sanitation district employee by a member of the public, Hill demanded that the district immediately cease what he called a "phony investigation."

"Mr. Hill clearly inserted himself into a personnel action in a manner which bears no tangible relationship to his role as an individual district director," the report stated.

In addition, the report concluded that several other accusations leveled against Hill were unfounded, while others were unsubstantiated due to a lack of sufficient evidence. Those included allegations that Hill shared or provided access to Arroyo Grande and sanitation district closed session communications to unauthorized third parties.

Addressing accusations that Hill's wife, Lin Hill, may have had access to confidential information or documents via her husband's email, the report said it turned up no hard evidence. However, the investigation did note that Lin functioned as a de-facto administrative assistant for her husband and may have had access to his city issued iPad and email account. The report stated that a city IT employee recalled giving Lin a password for her husband's email after she requested it Jan. 23, one day before the accusations against Hill were made at a public meeting. Lin claimed that her husband had forgotten the password, according to the report.

"For all these reasons, the preponderance of the evidence suggests Lin Hill more likely than not possessed, and indeed may still continue to possess, the password to Mr. Hill's city email account," the report stated.

Hill's attorney, Stewart Jenkins, said he was disappointed in the quality of the report.

"There's nothing very significant in there," Jenkins told New Times.

Hill did not participate in the investigation, and the report stated that communication with his attorney had been "unfruitful." Jenkins said the law firm broke off contact after he asked for a list of the accusations against Hill.

"I was a bit surprised at the resistance of Liebert Cassidy Whitmore to the American concept of due process," Jenkins said.

Jenkins indicated that the investigation was politically motivated, a claim Hill has previously made. Hill's supporters, some of whom showed up to an Aug. 8 Arroyo Grande City Council meeting to defend him during public comment (the report was not on the meeting agenda), shared a similar view.

"No matter what has happened, I don't trust the investigation," Arroyo Grande resident Coleen Kubel said. "I want you to know that all the people who elected you that I know are behind you and we do not believe some of these things."

Still, other residents like Shirley Gibson raised concerns about Hill in the wake of the report. Gibson said she found it embarrassing that Arroyo Grande was "sharing its dirty laundry" and worried that the some of the findings against Hill could get the city sued.

"To me all those things seem to lead to future litigation," she said. Δ