With the pungent smell of Tijuana schwag filling the room, representatives from various law enforcement agencies on Jan. 24 in San Luis Obispo revealed evidence collected from a 14-month undercover investigation into an international marijuana smuggling ring. According to police, the operation drew the pot from across the border and channeled it through various southern California cities before shooting the product to the Midwest and East Coast. 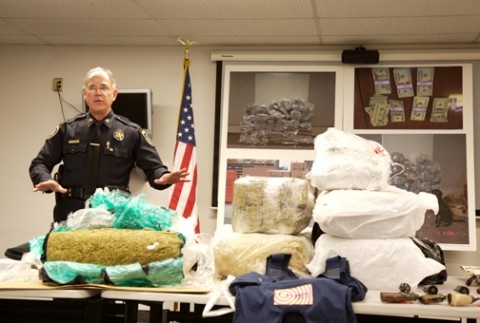 # The investigation began in November of 2005, when SLO County Drug Task Force agents seized 630 pounds of marijuana packed in computer equipment boxes and bound for Cincinnati.

Almost three weeks after concluding the investigation with a series of search warrants that brought in four suspects, the cooperative of law enforcement bodies went public.

According to undercover officers, who declined to be named or photographed, this was the largest marijuana seizure in regional history. Investigators would not provide additional information regarding the mechanics of the smuggling ring itself.

One undercover officer estimated the bulk value of the product at $400 per pound in California and as much as $1,200 in street value out east. Upon execution of the January search warrants, officers seized an additional 118 pounds of marijuana and $30,000 in cash.

The arrested suspects face charges for drug smuggling and conspiracy to distribute.