Does the system still stand a chance?

A year ago, a Texas-bred businessman came to Los Osos armed with a mysterious invention he touted as the miracle sewage solution Los Osans had been waiting for: the Reclamator. Tom Murphy talks about the Reclamator like the proverbial car that runs on water; it converts raw sewage into drinkable water, he says, and he boasts its use would negate the need for a multi-million-dollar public sewage system and $150-per-month fees for residents. 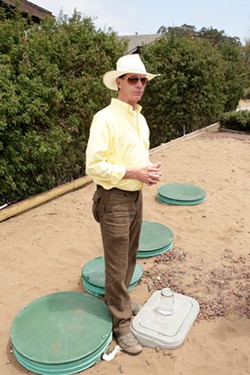 His ideas are bigger than life and his rhetoric is on par, but recently Murphy has been hitting snags. He lost a principal investor, his business partner left, he is embroiled in a $79.5 million lawsuit that he filed against the state, and state water officials call the Reclamator a bogus solution.

So is the Reclamator dead in the water?

The answer is a firm maybe. No public agency will outright endorse the system, but Murphy is charging forward with new investors—although he won’t name them—and the assistance of the San Luis Obispo public relations firm, S. Lombardi & Associates.

S. Lombardi & Associates’ General Manager Jeff Lind calls the Reclamator and Murphy’s fight against the state water board “60 Minutes material.” Like Murphy, he says the crux of the matter is that public agencies are hiding “the truth” about the Reclamator’s potential in order to protect their own financial interests.

Lind would not divulge how much money is going into the latest stream of print and radio advertisements, only saying that it is a “grassroots effort” with a “limited budget.”

Murphy targets the California Water Resources Control Board as the “big bad wolf,” and casts himself as the little guy fighting for the public’s right to cheap, clean water. Because he asserts that the Reclamator produces “drinkable” water onsite and not wastewater, he believes it falls outside the water board’s jurisdiction. He cites the Federal Clean Water Act as proof that his solution is the best and only option for Los Osos.

Despite all the big promises, Murphy’s former partner, Mark Low, got fed up and left. After his departure in late May, Low started sending a string of e-mails to environmental bureaucrats, politicians, and reporters that poke holes in the Reclamator’s effectiveness, and Murphy’s business model.

Low says the system has not been adequately tested, with only a handful of controlled samples used as evidence that it works. He believed in the Reclamator when he first moved to Los Osos and introduced Murphy to the investor that would also leave a year later, but now, “Tom seems more interested in litigation than he is in sanitation.” He went on, “The guy just turned out to be a real disappointment to me because he’s kind of a cowboy.”

Murphy filed a $79.5 million complaint with the California Victim Compensation and Government Claims board in December 2007, claiming that members of the water board made libelous statements about the Reclamator. The board denied the complaint in January and recommended that it go to civil court; Murphy obliged and filed with the San Luis Obispo Supreme Court on June 2. Along with the state water board, Murphy named the California Environmental Protection Agency and Central Coast Regional Water Quality Control Board, specifically Harvey Packard and Roger Briggs, in his lawsuit. The case is scheduled to go to court on October 6.

According to Packard, the stuff coming out of the Reclamator is still waste, and Murphy’s claims otherwise are unsubstantiated. Even with a Reclamator installed, homeowners in Los Osos will still have to pay their assessed county sewer fees. Installing a Reclamator, Packard says, “would be a waste of money.”

That Reclamator got an approved building permit, but the water coming out of it still ends up in the public sewage system. (The home is not on a septic system.)

Despite his critics, Murphy is still looking for people willing to invest $15,000 to be part of a 333-person pilot project. Downplaying any financial risk, Murphy is steadfast that every person in Los Osos will see the light and sign up for Reclamator service. Eventually, he claims, those first 333 will get their money reimbursed by federal and state grants. Packard says there are no such grants available.

Ever the salesman, Murphy says he is also willing to reimburse anyone who installs a Reclamator yet still gets monthly bills from the county. The one permitted Reclamator pumps water back to the Los Osos Community Services District, which Murphy believes he should be paid for, although he isn’t.

But that’s all going to change when he and more than 50 others file another lawsuit, he says, this time a class action against the Los Osos CSD.