Photos Courtesy Of Sina Shakerian FULL SPREAD If you're looking for something a little different, Shekamoo Grill serves up Persian-style grilled meats, salads, yogurt, and more.

Find Shekamoo Grill on Instagram @shekamoogrill to figure out where that Persian kabob will pop up next.

Koobideh—that's pronounced coo-bee-deh—is the best grilled ground meat you will ever eat. Sometimes it's just lamb, sometimes it's just beef, but traditionally, it's a combination of the two mixed with grated onion, sumac, salt, and pepper.

If you've never heard of it, don't feel bad. Koobideh is a Persian kabob (no, I didn't mean to write "kebab"). Similar to so many other ethnic foods, Persian cuisine doesn't really have a big foothold in SLO County. I grew up eating the succulent kabob alongside platters of delicate white and yellow rice laced with saffron, butter, and salt or wrapped in flatbreads like lavash or sanghak so the juicy meat soaked into the bread.

I'm salivating just writing about it. Seriously, it's so good. But then again, I'm Persian—my mother is from Iran—so I may be a little biased.

Although it sounds simple, koobideh is hard to make. Pressed by hand, the mixture is wrapped around 1-inch-wide stainless steel skewers and grilled over charcoal. If it's not done right, the meat just falls into the flames as it's cooking. There's an art to it—and Sina Shakerian has damn near perfected it. 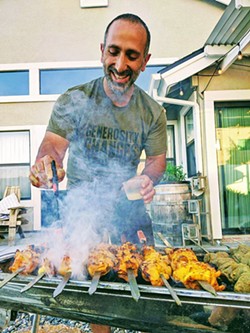 You will never be the same.

Shakerian has been grilling up that and more for North County customers for almost a year through pop-up and catering events. He and his wife, Lindsey, run Shekamoo Grill, serving Persian-style marinated chicken and tri-tip kabobs, kabob-e koobideh, herbed yogurt, Shirazi salad (cucumber, tomatoes, onion, and lemon juice), and classic Persian rice since last April at places like the Rodeo Bar in Paso Robles. With a catering permit, but no permanent kitchen, Shekamoo uses commissary kitchens and does pop-up events where it can.

Raised in Los Angeles and Orange County, Shakerian said he's been cooking Persian food with his parents since he was 15 or 16. Once or twice a month, his father would fire up the grill to make koobideh. Shakerian said it was such a process, watching his dad take a ball of meat and turn it into what it becomes.

"He wouldn't let me do it, because it's hard," Shakerian said. "Eventually, I just got myself there."

Behind his father's back, Shakerian would practice the art form. Trying to get the spice mixture right and getting that ground meat to stick to the skewer just so.

"Then, when I grew up, we started doing it together. It's been an interesting journey, and being able to share it with people. ... It feels good."

He contends that the best part of the Shekamoo story is its namesake, his wife, who he calls shekamoo. It's an endearing name that roughly translates to someone who likes to eat, but in a playful way. Shakerian said he and Lindsey met while taking engineering classes at Cal Poly. They would study together, and when he would go to LA for a visit, his mother would send him back with lots of Persian food, which Lindsey tried and, of course, loved.

"She started out not knowing anything about cooking," he said. "Once we got together, we started experimenting." 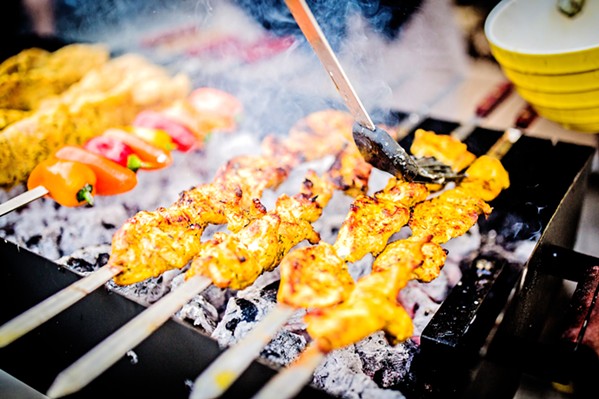 His first meal at her place consisted of a box of macaroni and cheese, which he jazzed up with onion and hot dog. And while he never ventured outside of the cultural cuisine he grew up eating, Shakerian said Lindsey was soon cooking all kinds of things—such as the Vietnamese banh mi sandwich with home-pickled carrots and onions.

"And it's come full circle, because she's gotten me to come out of the box and challenged me to try to cook new things," he said. "It's been a beautiful journey for us."

Married in 2015, Lindsey works as a planner/project manager at PG&E, while Shakerian taught math at local high schools until 2020, when he started looking for work in the North County restaurant industry, manning the grill.

As the idea of trying to start their own food business became more real, Shakerian said he thought he'd better give himself a foundation of knowledge to pull from.

He worked at Jeffry's Wine Country BBQ at first, before moving over to The Hatch, both of which were affected by COVID-19 restrictions. Now, he's grilling up steaks and such at the French Les Petites Canailles in Paso Robles.

While the grill at LPC is fueled with gas, Shakerian's Persian kabob grill is made for charcoal. A box designed to fit the telltale Persian skewers just right, the grill is deep so the charcoal can hum its deep amber dance of heat, sending up the occasional flame that rises to lash the meat. 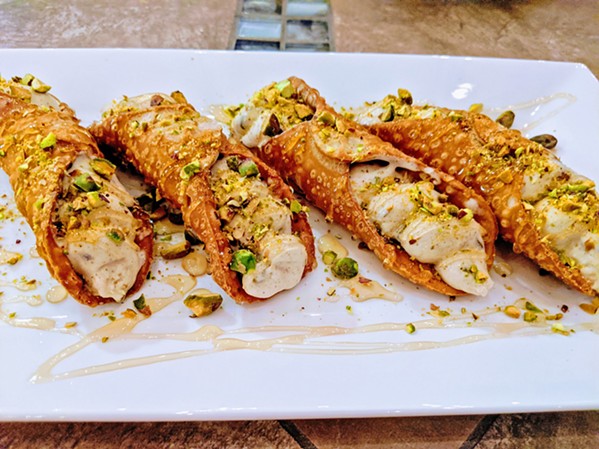 Chicken and tri-tip get cut into chunks and marinated in a saffron- and onion-tinged acid like lime and yogurt for two to three days to make it tender. Chicken is layered onto a wide skewer, as are the tri-tip, tomatoes, and peppers. Grilled tomatoes are something else: soft and succulent with a little bit of char, they're delicious with rice, which you scoop up in a spoon with a little bit of grilled meat.

When done right, joojeh kabob (that's the chicken) and kabob-e barg (that's the steak), are tender and packed with flavor—the meat just pulls apart with a little tug. Saffron, citrus, onion, and yogurt mingle into the meat. You can taste the grill.

The real trick to tender meat, Shakerian said, is to add butter as it's grilling.

"You have to butter it and lime it so it doesn't dry out," he said. "You can never hurt a meat by adding a little butter to it." Δ

Editor Camillia Lanham is ready for another skewer. Send food tips to clanham@newtimesslo.com.