“Some of this art has a little deeper humor, some is a little slapstick humor, and some just makes you laugh,” Left Field Gallery Owner Nick Wilkinson says. Backdropped by the freshly painted white walls of his artist’s alcove tucked away on Monterey Street, Wilkinson appears extra colorful.

The artist speaks with his hands and pauses periodically to roll his blue eyes up to the ceiling, searching for just the right word to describe the indescribable. Talking about art is so much harder than just experiencing it. So that’s why I’m here. I want to laugh out loud.

Take what’s waiting to be hung: a striking portrait of Bill Cosby. The be-sweatered comedian looks unnervingly serene while thumbing through a tome titled Dr. Seuss’s Sleep Book. The painting, created by Eric Yahnker of LA, says it all. This upcoming show—coyly entitled 21st Century LOLs: Vol. 1—isn’t afraid to be bold or to chuckle in the face of controversy.

“Yahnker plays a lot on celebrity, and if a celebrity has baggage, he’ll approach it in a really interesting and funny way,” Wilkinson says. “There’s so many artists involved in this show that are so mind-blowing and cool to have in here. I’m totally geeking out about it.”

Like Scott Reeder, whose unpretentious paintings have shown at Chicago’s Museum of Contemporary Art. Wilkinson unwraps a piece of the Chicagoan’s work, which can really only be described as a painting of “an introspective ice cream cone,” looking (as wistfully as an ice cream cone can) into a mirror. Poor ice cream cone. Will he ever find the truth he so desperately seeks?

Wilkinson calls Reeder’s art “hysterical,” suggesting that I might also enjoy the levity of “Christian Calculator,” which—as you may have guessed—combines your average religious imagery with a calculator (Google it). The work is deceptively childlike and totally irreverent. 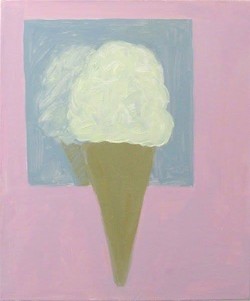 Before I can get my head around it, Wilkinson points out an object so slyly mundane I almost miss it: a shiny metal saucepan that looks exactly like a normal saucepan, except for the fact that it nearly dwarfs me at 4-feet tall. How’d that get in here? I had to ask the creator of the work, Matt Irie (also of Chicago), “What the heck?”

“The concept for this work begins with familiar objects everyone has an association with—things most people take for granted as being more or less stable,” Ire told New Times in an email. “Then, by altering the object in some way—absurd, metaphorical, humorous—my hope is to create an experience which is unfamiliar yet allows for the viewer’s own associations.”

When I asked the artist if he discovered anything interesting when making the sculpture, he replied with the astute observation: “Four-foot saucepans are pretty awkward to do just about anything with.”

It’s easy to forget you’re in SLO when you’re at Left Field Gallery, especially with this latest show. For all intents and purposes, 21st Century LOLs: Vol. 1 is an alternate universe where everything glimmers with a sly wink and a nod.

More into soft, Central Coast landscapes? There’s plenty of that to be seen downtown and around the county. Wilkinson isn’t dissing local art by any means, but he’s clear on the point that Left Field Gallery is about bringing the boldest and brightest contemporary artists from across the state and the country.

“I have lots of artist friends who don’t live around here who make their living doing art. I thought it would be more fun and interesting to bring new people to the Central Coast that you wouldn’t have a chance to see unless you went to someplace like LA,” Wilkinson says. “When we did the gallery out of [Deer Run Art & Artifacts] in Cambria, we tried to be really mindful that not everyone wanted to see a boobie; we tried to be more family friendly. This space, moving forward, is going to be pretty open.”

This news is a breath of fresh air as far as I’m concerned. Rooted in contemporary painting, the space will continue to house a traveling array of stimulating sculptures, installations, and even mural art (the last show featured Cody Hudson of Chicago, who embellished a wall with intense color). The last time I visited the gallery, I was floored by an electric guitar and amp installation (with cords, nobs—the whole nine yards) made completely out of wood.

It just goes to show that a touch of the surreal can be healthy. It’s good to see the world in a new light, and it’s certainly good to giggle. For Wilkinson, the gallery is a blank canvas and a portal into a billion different dimensions.

“I want it to feel like it’s its own object; its own entity,” Wilkinson said. “On show nights, the gallery becomes its own moment.”

Hayley Thomas doesn’t know what she’d do with a 4-foot-tall sauce pan either at hthomas@newtimesslo.com.