County code officials want car gone, one way or another

Other than the license plate, there are only two words visible on the white 1971 Jaguar planted in the side of the dirt embankment in rural Templeton. The words, written in the sort of small stick-on letters used on mailboxes, read “Slow down!” and make the vehicle seem a sort of warning to vehicles that regularly take the hairpin turn at high speeds. 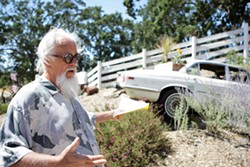 In the eyes of county code enforcers, however, those words qualify the vehicle as a commercial sign, one that they say advertises the Finley Family Nursery and Garden Center, on whose land it sits. And because they deem the car a sign, they believe they can force Bob Finley to get rid of it.

If he doesn’t, they’ve warned in a letter, they’ll fine the nursery he founded $500 a day, and subject the family trust that owns the nursery to potential criminal prosecution.

It would be an understatement to say that Finley doesn’t agree with the county’s stance on the issue. “I’m getting really sick of these assholes,” he said of code enforcers. “These guys, when they get in your shit, they don’t get out.”

To Finley, the car is unambiguously about free expression. He calls it “yard art,” and says he was inspired by such other car-art installations as Cadillac Ranch in Texas and Carhenge in Nebraska. He says it was meant to slow people down and that it’s been effective; the county has since installed signs warning people to slow to 35 mph on the curve.

More broadly, he questions why the car is different from someone having an antique wagon out front (something he also has, although nobody has complained about the wagon.)

And it’s obvious code enforcers have had trouble defining exactly what it is they don’t like about Finley’s car.

The car has been out front since 2004, Finley said, and in the meantime he’s had discussions about it with representatives from the county’s Public Works Department, the Sheriff’s Department, and the California Highway Patrol. None of them took any action. But things changed in March of this year, when the family was told the county had received a complaint about a “stored, abandoned, or illegally parked vehicle along the county Right of Way.”

The family was given seven days to remove the car, but instead responded by pointing out that the vehicle was on nursery property, and not in the county’s right of way.

The next letter the family received was a “notice of violation,” signed by Senior Investigator Gary Camack, alleging the same things as the earlier letter and threatening the nursery owners with potential misdemeanor prosecution and fines of $500 per day.

But within a month, code officials retracted that violation, writing in an e-mail that they’d reviewed the ordinances and had a Planning Department management meeting and “determined that the vehicle would be better addressed as a ‘sign’ and not as a stored vehicle.”

They followed up with a new “notice of violation,” this one calling the car a “monument sign in Ag zoning with commercial use.” Elsewhere in the letter, officials required that the family apply for a sign permit for both the car and stone lettering next to it—white stones spell out the word “nursery” on the embankment.

The change-of-tactic made Finley suspicious. To his eye, it doesn’t seem like code officials are trying to objectively enforce written codes; instead he thinks they want to get rid of his car, and they’re searching for a written code that will let them. “I don’t know how it goes from a car to sign,” he wondered.

Camack did not return a call from the New Times requesting comment.

The family has an appeal before the Planning Commission scheduled for Nov. 6.