Is that a bottle of A1 steak sauce, or are you just happy to see me?

My Elks Lodge pals and I are at dinner in SLO Brew when we catch our first Fee Waybill sighting. The Tubes front man and the whole band are eating dinner in the corner. The food’s awesome—try the Jazz and Bleu’s salad—but I look up from feasting long enough to see Pismo Beach resident Scott Strahl, a Facebook friend, stop by our table and introduce us to a couple guys from the band, including keyboardist David Medd, who will be the key to understanding how Chris Jackson ended up seeing Fee naked. Scott used to work with the band and has been helping them set up all day, hanging out and reliving memories. 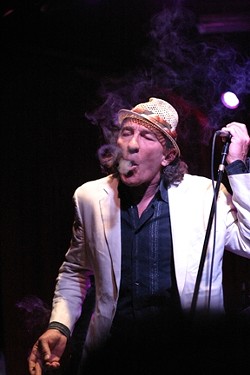 After dinner, we head down to our booth, thanks to Stan and Jill Hale, who hooked up Chris and Courtney Jackson and my wife Anna and me. Gotta love the VIP table! Here comes our server Shea Lockhart, who says she’ll be taking care of us tonight.

An ancient roadie comes out on stage to make some last-minute adjustments, and my friend Cyndi Hafley leans over to me and says, “You know what that roadie just said? Get off my lawn, you damn kids!”

I see club owner Todd Newman and stop by to say hi, just in time to overhear The Tubes soundman lean over to him and ask him to make sure to keep people from talking around the sound booth. Insert eye roll. I guess these guys have been a little high maintenance. 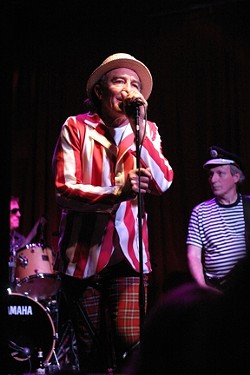 Let’s face some hard truths. My wife is by far the youngest person in here. Even though the demographics are skewed toward the gray-haired set, when Fee Waybill takes the stage, he delivers the goods!

Dressed in a light-colored jacket, tan slacks, and sporting a hat, sunglasses, a cigarette, and a drink, he launches into an amazing version of “It’s a Man’s World.” Luckily I have earplugs. It’s freaking loud! Don’t talk by the sound booth? You’d have to scream to be heard over the sound!

After the song and some enduring applause, Fee says, “It’s great to be … where the fuck am I?”

The crowd and I love this guy! Then he says, “Let me strip down to my wife-beater. How many wife beaters do we have in the audience?”

To say his voice sounds unusual and incredible would be an understatement!

Then Fee comes out dressed as a Roman soldier with a golden codpiece festooned with safety pins. I don’t care how punk rock you think you are. Fee Waybill is. More. Punk. Rock. Than. You.

His next costume is shirtless, with black ass-less chaps and a black codpiece. 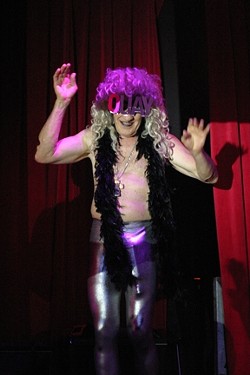 “Get back in the basement!” screams Cyndi Hafley, referencing The Gimp in Pulp Fiction.

Now he’s using a flashlight like it’s his penis and lighting up the guitar solos.

This is fun, but I think I liked the theatrics better when The Tubes had four topless female backup singers.

Right around now, Chris Jackson gets the wave up from keyboardist David Medd, so he gets up on stage and is checking out the music. When he finally gets ready to leave the stage, instead of coming down the stairs into the audience, Chris goes through the greenroom door to see Fee standing stark naked.

“What in the fuck are you doing in here?” screams Fee, according to Chris, who runs through, and that’s when I see a couple doormen running down the hall, grabbing Chris and hauling him out the back door. Yikes!

A few minutes later, Chris has made his way back in through the front door and is at the booth, when the doormen spot him again. Boom! He’s out again. Bummer, because here comes Fee in his alter ego Quay Lewd, and the show goes on! This is rock’n’roll, people! Gotta love it!