Is the ground making him sick?

An 18-year-old Santa Marian recently diagnosed with leukemia filed a lawsuit on Nov. 2 against Chevron Corporation, ConocoPhillips, and other oil companies, demanding a full cleanup of the abandoned oil sumps he and his family believe made him sick. 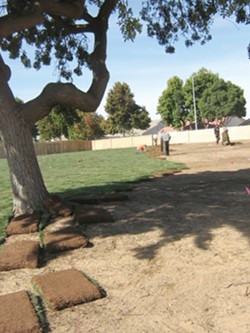 # Scott Chenoweth has lived at his home on Rain Tree Drive in southeastern Santa Maria since 1988. He grew up digging around even eating the dirt in his backyard, just like every other child in his neighborhood of well-manicured lawns and large stucco houses.

And like others in the Sunrise Hills development when they bought their home his family was not informed of possible ground contamination from past oil production in the area.

Filed in the Santa Barbara County Superior Court, the lawsuit asks for general and punitive damages and reimbursement for the costs of Chenoweth's medical treatment and any other economic losses. It also asks the court to order the companies to find a permanent, comprehensive solution to the problem.

"We think the best way to deal with it is to go in and take care of the homes that are there and let this whole community move forward," said Steven Williams, partner with Cotchett, Pitre, Simon, and McCarthy law firm. "It's not that hard to do, and, in relative terms, it's not that expensive."

"We saw ConocoPhillips' profits a week ago we saw Chevron's a week ago," Williams said. "These companies are making enormous profits. If they took a week of these profits and spent it on Santa Maria, we'd never hear of these problems again."

Oil production in that area of the Santa Maria Valley dates back to the 1930s. In 1964, Union Oil Company entered into an agreement with other companies to share the profits of their resource exploitation.

After the companies finished drilling for oil, the resulting holes in the ground became sumps where wastewater, drilling mud, and petroleum residuals were allowed to fester for years. When production ceased throughout the 1980s and 1990s, the companies mixed the sumps with native soil, covered them, and sold the land to developers.

Chevron is responsible for the cleanup operations of five homes in the Sunrise Hills neighborhood and another six in Park Villas 2, another affected development, Garcia said.

"These things are not a risk to human health. What they are is more of a nuisance issue and a property-value issue," Garcia said. "What we've been trying to do is clean these things up even though there's no legal requirement to do so."

Santa Barbara County is in the process of completing a health risk assessment of the ground contamination. As of press time, the county official overseeing the cleanup did not return phone calls regarding the status of these assessments.

For the last five years or so, the companies have been going from door to door and either buying and demolishing homes or ripping up people's backyards to remove the contaminated dirt. As a result, the neighborhood resembles a patchwork of suburban homes mixed with empty lots and piles of dirt where houses once stood.

Scott Chenoweth's parents, Lisa and Jeff, are party to another lawsuit claiming property damage along with 16 other families, but this is the first time anyone in the neighborhood has accused the corporations of knowingly putting families' health at risk.

"They should be accountable because they don't know what we go through every day," Chenoweth said, when asked what he hopes to gain from the lawsuit.

In July, doctors diagnosed Chenoweth with acute lymphocytic leukemia (ALL) just a few months after his graduation from St. Joseph High School.

ALL is a rare form of cancer more common in children. Only 3,970 new cases of ALL will be diagnosed in 2006, according to the American Cancer Society.

Chenoweth has had to put his dream of being a firefighter on hold for at least a year while he undergoes weekly chemotherapy treatments. After that, he'll need chemotherapy once a month for two years.

"[The doctors] tell us that they have an 85-percent rate of people getting cured after these three years," said Lisa Chenoweth, Scott's mom. "So you just pray you're not one of the 15 percent."

Though it's impossible to isolate the main cause of any particular case of cancer with absolute certainty, leukemia in particular has been linked most strongly to environmental factors as opposed to cancers that are linked to lifestyle choices, like lung or skin cancer, according to the Cancer Society.

Jane Alfaro, another Rain Tree Drive resident, has been noticing an unusually high number of cancer cases in both people and animals up and down her block ever since she began to suspect that the oil beneath her property had something to do with a brain tumor she suffered nine years ago.

In 2003, she retired from her job early at just 43 years old because of physical complications from that tumor. Now she worries about the health of her teenage son, who was born in the neighborhood.

"Just being here makes me so nervous. But there's no way we can get out, no way we can sell the house," Alfaro said. "Even if we could rent the house, we would feel awful if something would happen to someone else's child.

"I truly believe that the effects of the oil are causing cancer," she said.

Benzene, one of the chemicals found in the old sumps, has been classified as a known human carcinogen by both the International Agency for Research on Cancer and the Environmental Protection Agency.

Increased risks of leukemia have been reported in the oil-refining industry and other industries where workers are exposed to benzene, even at low levels, according to the American Cancer Society.

Chevron's Garcia said that the natural deterioration of the benzene over the years, the depths at which it was buried, and the absence of a known "path" such as groundwater to move the benzene toward people and animals makes the contamination harmless.

Whether or not the benzene is a health risk, pinning any cause of cancer on any one kind of pollution or chemical is a real scientific challenge, said Dr. Kiumarss Nasseri, Tri-Counties Cancer Surveillance Program regional epidemiologist.

His agency has tracked all new cancer cases since 1988 in Ventura, Santa Barbara, and San Luis Obispo counties as part of a national program. In his 11 years with the county, Nasseri said he has never been able to link an increase in cancer cases with an environmental factor, despite numerous investigations. But that doesn't mean risk doesn't exist, he added.

"We need to study these things with more attention," the doctor said. "For example, secondhand smoke. Ten, 15 years ago, nobody would have thought that secondhand smoke would have caused cancer. Now we know that it causes cancer."

The surveillance program has not looked specifically at the Sunrise Hills neighborhood to see whether there is a cancer cluster, though it would study the area if neighbors requested it, Nasseri said.

Shirley Adelhelm and her family are best friends with the Chenoweths, who live across the street. On either side of her, oil companies have purchased and demolished homes and are in the process of removing all the contaminated soil and replacing it.

"We're all scared. We haven't had a garden in a few years because we're afraid to eat the vegetables," she said. "I don't want to be in this neighborhood."

Lately, Scott Chenoweth doesn't even let his mother open the windows on a hot day for fear that the air surrounding his home on Rain Tree Drive might make him even sicker.

The doctors told the Chenoweths that his leukemia had an incubation time of six weeks, meaning that the cancer cells began to take over his bone marrow in early spring of 2006.

The boy's specific type of cancer, his young age, the fact that he's lived in the Sunrise Hills neighborhood nearly his entire life, and the fact that he has not been exposed to chemicals through any work experience should all help his lawyers prove a link between the leukemia and the ground contamination, attorney Williams said.

"I didn't get sick until they were cleaning it up," Chenoweth said. "They left the soil open for days and there was black soil in the air all day long."

Kirsten Flagg is news editor of New Times' sister paper, the Santa Maria Sun. She can be contacted at kflagg@santamariasun.com.